Penn State coaching icon Joe Paterno passed away Sunday morning, at the age of 85 following a bout with lung cancer. While the end of his coaching career certainly came wiht a bit of a black eye, everyone will have a different take on how they will remember Joe Paterno. As somebody who grew up watching Penn State and reading book after book on Joe Paterno, and learning about the sport of college football by watching Penn State on Saturday afternoons, I realize that my feelings will differ from many others right now.

In time we will be able to grab a better perspective on the life of Joe Paterno and the impact he had on everything he did, from coaching to philanthropy and even to his shortcomings both on and off the field.

On Saturday night, as the media frenzy and confusion over the status of Paterno was highly scrutinized, I took some time to write my Paterno retrospective and share my somewhat personal story. Below the photo (and after the jump) is an excerpt from the piece I wrote. You can read the full article here. 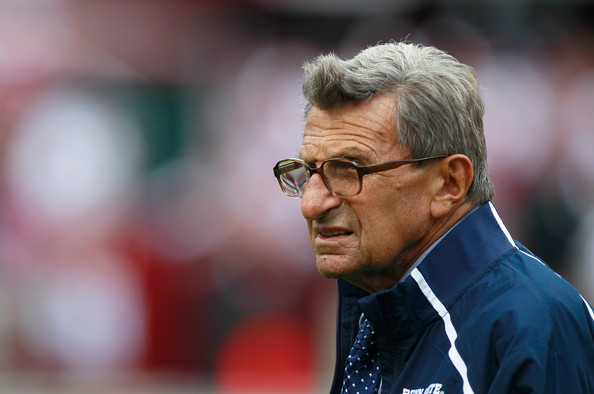 I covered the final three seasons of Paterno’s career, including the ultimate and sudden firing that fateful November night. I asked him questions in a press setting but never had the opportunity to have a more individual encounter with him. There was the time he was being carted to the press room in Beaver Stadium and scolded a couple of us on his way in, as we were standing in the way filing in to the room from a separate entrance.

“C’mon guys we have to get in there!” he said, looking a little disgruntled with the media. What else was new?

As I sit here and look back on Paterno I think all the way back to the spring of 1994. My mother was closing in her nursing degree form Penn State’s Delaware County campus. For her it was the culmination of 12 years of night classes as she was raising two kids and working at the same time. To this day I don’t know many people who have worked that hard for anything in their lives.

My father, looking to mark the special occasion and reward my mom for her hard work and dedication wanted to throw a surprise dinner party for her with my family and some friends gathering some time after the graduation ceremony. My dad, who is always looking to pull some tricks from up his sleeve, wrote a couple of letters to a couple of people asking for a short note of congratulations. One was Chris Wheeler, a Philadelphia Phillies broadcaster and Penn State alum. The other was Paterno.

Both responded kindly with a short note of congratulations to my mom, which my dad gave as a present. Out of curiosity my dad was wondering if it was really Paterno who wrote the note. He compared it to a book he had signed by Paterno at a book signing previously. Sure enough, the signature matched. Surely Paterno could have had a secretary or someone else write a short note, but this was no doubt about it a short note from Paterno.

I imagine Paterno probably wrote a good number of short notes over his career.

We will have more on Joe Paterno soon. Kevin McGuire is the managing editor and lead writer for Bloguin’s Nittany Lions Den. Follow him on Twitter, Facebook and Google+.