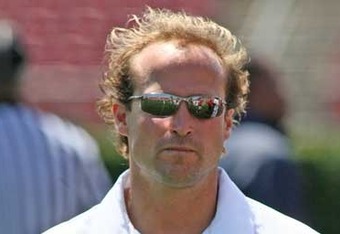 The hard-hearted Big East “terminated” West Virginia on Valentine’s Day. The move freed up the Mountaineers to officially move on to the Big 12, a conference that has seen its own fair share of break-ups in the last two years.

Since the conference expansion ball got rolling, Nebraska, Colorado, Texas A&M and Missouri have all jilted the Big 12 for greener pastures. In the process, the league slimmed down from 12 teams to 10 and added WVU and Texas Christian.

A conference doesn’t lose a Texas A&M or a Nebraska and not suffer a hit in terms of brand and prestige. But have you seen what WVU and TCU have done in the last decade?

Is it possible that the Big 12 is now a better football conference than it was before expansion started?

Tom Perry: I don’t want to undervalue what Texas A&M and Missouri brought to the Big 12. Both programs were longstanding members in one fashion or another and were quality members. But neither program has played at the level of TCU or WVU over the past decade. Now losing Nebraska a year earlier was tough, but Colorado had not contributed much. What I like most about how the Big 12 approached realignment was the conference sought out quality teams over TV markets. It was all about improving the product and with TCU and WVU the Big 12 is better now than it was a year ago.

Kevin McGuire: Going back to 2000 Nebraska, Colorado, Missouri and Texas A&M have combined for two BCS bowl appearances, and both were considered miserable failures in the 2001 season with Colorado getting blown away by Oregon and Nebraska getting handled by a superior Miami team. Meanwhile we have seen West Virginia win more BCS games (three) than the four old Big 12 members played in and TCU make back-to-back BCS appearances in the 2009 and 2010 seasons, winning one and losing the other.

Certainly based on recent success it is easy to say the Big 12 comes out ahead with the changes. To me, TCU was the perfect replacement for Texas A&M. Getting West Virginia is a solid addition because they may not have the TV draw other top programs have, but they are a well-known football brand. If you had to choose between Missouri and West Virginia, wouldn’t you take the Mountaineers over the Tigers? I would, easily.

The question for the Big 12 now will be whether or not they can keep everybody happy. We know tensions were high when Texas introduced the Longhorn Network. Are those issues behind us or will we see more trouble in the next year?  It wasn’t all that long ago we basically had the Big 12 on a death bed. I think the conference has survived, and may be stronger than they were a year ago.

Aaron Torres: Woah, woah, I think we need to pump the breaks on any sort of “is the conference better” discussion right now.

Look, anyone who has read my work knows that I don’t hold Texas A&M in high regard. But Nebraska had proven themselves to be a burgeoning North Division power when they left the conference, Missouri is an automatic 7-8 win bowl team (and during the Chase Daniel years even better), and it wasn’t all that long ago that Colorado was competing in the North. In essence, of the four teams you’ve mentioned, three were bowl eligible every year. Which three just depended on the particular year.

As for the incoming teams, well, I need to see it to believe it first. Remember, it wasn’t all that long ago that we as a staff were questioning the merits of TCU’s ability to step into the Big East and compete. And the Big East ain’t the Big XII. As we always talk about with Boise, it’s easy for TCU to get “up” for a game with Oklahoma, Baylor or whomever else in years past. Will they be able to do it week in and week out though? I think a season similar to what Utah had in their first in the Pac-12 (8-5, 4-5 in league play) seems likely.

Then there’s West Virginia, and my goodness, am I the only one who remembers anything that happened before the Orange Bowl? This was a team that not only never put together a consistent game of play, but barely a consistent quarter. They got embarrassed at Syracuse, and needed minor miracles to escape Rutgers and Pitt, as well as an injury to Zach Collaros to put away Cincinnati. Frankly, I’m still not sure how I feel about the idea of “Dana Holgorsen: Head Coach.”

The truth is, having Missouri and Nebraska especially (and to a smaller degree A&M) in your conference, is a lot like dating a girl for a long time: You knew what you were getting every day, of every year, and sure, at times it got a little boring. TCU and West Virginia are something different, sure (however, since this is a PG-13 site, I’ll stop the dating analogy here). That doesn’t mean they’re “better,” though.

At least not yet.

Ty Hildenbrandt: I’m trying to figure out how I’d explain all this if I went back to visit myself in 2008.  A 4-for-2 trade which would make the conference smaller in both number and national appeal?  My response would not have been: “Great! Where do I sign up?!”  Instead, I would’ve asked: “How is this progress?!?”

This reminds me a lot of when CBS fired Charlie Sheen from Two and a Half Men and tried to sell Ashton Kutcher as a younger and edgier star, despite having to scrap the entire plot of the old show and alienate half its fan base in the process.  Now, it trails something called 2 Broke Girls in the ratings, which is, ironically, the perfect segue into my biggest question about the new Big XII: Is any of this sustainable?

Stable conferences are built over time by success breeding more success, not from a small sampling of winning seasons by TCU and West Virginia.  The Big XII was already on the verge of collapsing once.  Can the conference flourish after stopgap measures were taken to prevent its demise?  I’d love to answer yes, but, well, I have no idea who will be in charge of the conference six months from now.  I also have no idea what the long-term growth strategy looks like.  Or if such a strategy even exists.

The Big XII isn’t a better football conference.  It’s a different football conference.  We’ll all watch and be intrigued, because we love college football.  But I will shy away from judging whether this is a winning or losing proposition until there is some empirical evidence to suggest it will fly.

Allen Kenney: I’ve never watched an episode of Two and a Half Men, Ty, but Charlie Sheen seems like an excellent parallel to Texas A&M. Like Sheen’s “Winning” road tour and goddess house, the Aggies are great at the build-up, but suck at the delivery. Neither have shown any capacity to handle success. Tiger blood runs through their veins. Both have seen Denise Richards naked. But I digress.

I definitely understand the wait-and-see mindset – I mean, how can we really have this conversation without seeing at least a season from TCU and WVU in the Big 12? There’s also no doubt that the league’s national appeal has decreased. Try as they might, WVU and TCU simply don’t bring the brand and resources to the table to replace what the Big 12 has lost.

But if you like good football, look at the resumes. Since the start of the BCS, TCU and WVU have won as many BCS games as the four departed teams combined to play in. Nebraska has muddled along since the early 2000s and hasn’t finished the season in the top 10 of the polls since 2001. A&M has been one of the biggest underachievers in the country, not just recently, but historically. Colorado lives in that netherworld where 6-6 is a good year and 8-4 is a really good one. Mizzou has seen an upswing in recent years, but the Tigers haven’t really done anything of merit compared to the two newcomers.

TCU and WVU are facing a big step up in class. There’s simply no way they will win at the same level that they have in the last decade. They won’t be able to beat the Oklahomas and Texases of the world with any kind of consistency.

In terms of the quality of play, though, I don’t see how it’s anything worse than a wash as of now.

Michael Felder: I think the “wait and see” on TCU and WVU suggested by Aaron is warranted BUT I also think on the surface, when talking exchanges you can make a call right now on the pluses those teams bring to the league. Sure Mizzou, aTm, Nebraska and Colorado from a tradition standpoint mean more than the newcomers in the Big XII but on the field gimme the Frogs and the Eers in the last several years.

We’re talking 4 BCS wins versus 0 BCS appearances. That’s a plus when you’re looking at the league’s profile. No, the brands don’t measure up to Texas A&M or Nebraska but on the field you’ve got two teams who have got it done, both in very different fashions. TCU has been Steady Eddie with Gary Patterson working their system and blossoming. With WVU we’ve got three head coaches with BCS wins in three different BCS games.

So right now what the Big XII is getting is more than Nebraska, aTm, Colorado and Mizzou gave them during the last decade. Does it mean long term the league is better off? Absolutely not but if we’re just talking entering 2012 yes, the additions are stronger than the losses have been.