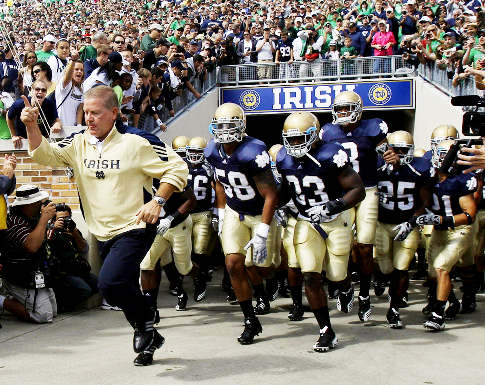 It’s the third week of the Monday Morning Look Ahead, and with it, we are proud to announce that for the first time… we actually have college football games to discuss! That’s right, after eight long months, college football is back in just a few days, with South Carolina and Vanderbilt kicking off a slew of games Thursday night that won’t stop until Georgia Tech-Virginia Tech clash late Monday.

So what are we keeping our eyes on heading into Week 1?

When will the suspensions stop?

To the surprise of many, it was actually a relatively quiet off-season in the college football world. While most summers are filled with arrests, suspensions, expulsions and (in the rarest of cases) the occasional deportation, this year was relatively quiet… at least until the last few weeks, when anyone with 4.5 speed and half a brain has seemed to go out of their way to get suspended for college football’s opening weekend.

The latest news broke Sunday, when Notre Dame head coach Brian Kelly announced that leading returning rusher Cierre Wood was suspended for the opening two games of the season and will not be traveling with the Irish to Ireland for their opener with Navy.

Simply put, this is devastating news for a Notre Dame club that just can’t afford any more bad publicity heading into their opener. The Irish will already be breaking in a first-time quarterback in Everett Gohlson (whose last start was as a high school senior), and with leading receiver Michael Floyd now catching pros as a professional, Notre Dame’s margin for error on offense is thinner than it’s been since Kelly arrived. Wood, an 1,100 yard rusher in 2011, was expected to carry the load for the young offense.

Look for Theo Riddick to get the bulk of carries in his absence.

Staying with the off-the-field drama, how will suspensions effect this weekend in Atlanta as well?

Like Notre Dame, Tennessee lost a key player, into their opener Friday night against NC State at the Georgia Dome. Theirs is Da’Rick Rogers, the SEC’s leading receiver a year ago, and a guy who led the Vols with 68 catches in 2011. Rogers was suspended indefinitely by Derek Dooley late last week, and it was reported late Sunday night that Rogers had transferred to Tennessee Tech, which would end his career as a Vol.

Now unlike Notre Dame, Tennessee has capable replacements for Rogers with fellow junior Justin Hunter, and junior college superstar Corradarrelle Patterson. The Vols should score points without Rogers, even if he would’ve been a nice security blanket for quarterback Tyler Bray.

The problem is that their also their defense is an ever-evolving work in progress, and (like Notre Dame’s offense) has little margin for error going against an NC State team that puts up points in bunches as well. Yes, Bray, Hunter and Patterson are legit. But so too are Mike Glennon and the Wolfpack receiving corps. NC State averaged 41 points through their last three games of the 2011 season.

Then there’s Saturday night in Atlanta:

Where just like Tennessee, the Auburn Tigers are facing crippling suspensions too. The Tigers lost starting center Reese Dismukes on a public intoxication charge this weekend and star-crossed wide receiver De’Angelo Benton was suspended by Gene Chizik earlier in this week as well. And while neither has the impact of Wood or Rogers, many, including AL.com’s Kevin Scarbinsky are wondering if Gene Chizik has begun to lose control of this program.

Luckily for the Tigers, their opponents will also be without a pretty key player. You have heard of Sammy Watkins, right? Yeah, he won’t be playing Saturday either.

What did we tell you about everyone getting suspended before the start of the season?

Back to Notre Dame-Navy, where…

We’d be remiss if we didn’t mention how fascinated we are with the logistics of their game in Ireland. We’ve never seen anything like it, and have no basis for comparison, meaning that just about anything could happen and it wouldn’t surprise us. And while it’s undoubtedly a once in a lifetime opportunity for the fans attending the game and the players participating in it, it’s nothing short of a nightmare for the coaching staffs. Especially Brian Kelly, who- as you probably know by now- doesn’t need any more headaches in his life.

The Chicago Sun-Times did an incredible job of breaking it down everything that will go into this weekend, and really the problems run much further than we could’ve ever imagined.

Sure, we all know about the time change and strange flight pattern that will see the Irish leave Wednesday night and arrive Thursday morning. But as the Sun-Times pointed out in an excellent piece this weekend, it goes much deeper than that. What about getting players their proper pregame meal in a place where a plate of pasta and chicken isn’t necessarily easy to come by? What about everyone suiting up in a locker room that was never built to accommodate 100 oversized teenagers and twenty-something’s? What about simply playing a game that starts at 8 a.m. standard time in South Bend?

These are problems that no one other than Notre Dame’s Saturday opponent will deal with all year.

They’re also problems no one will be sympathetic about if the Irish can’t get the win.

Notre Dame isn’t the only team playing a key regular season opener, under less than ideal circumstances. It all starts on Thursday night, when pair of first-year head coaches will each face unique challenges on the road.

The first comes to us live from Houston, where Jim L. Mora will open up his UCLA coaching career by playing… Rice? Sure the game should be a victory for the Bruins, but still, it’s not like the UCLA administration did any favors by forcing Mora’s club to open on the road. Especially when they’ve lost their last two openers, both away from Westwood. Are we sensing a trend here?

Beyond that, don’t sleep on an Owls club which features former Michigan super-recruit Sam McGuffie. He’s coming off an injury-plagued 2011 season, but did lead Rice in both rushing (883 yards) and receiving (39 catches) in 2010. Going against a UCLA defense that has never been known for its discipline, don’t be surprised if McGuffie has a big day.

Then there’s Kevin Sumlin, who will take his Texas A&M club (not to mention his first year quarterback as well) to Shreveport to face a Louisiana Tech team that should put up points and points against an inexperienced Aggies defense. The Bulldogs return seven starters off a club that averaged 30 points a game last year, and put up at least 38 in three of their last six.

Don’t be surprised if both the underdogs are able to keep things close against their “bigger name” competition.

– Even USC isn’t immune to the suspension game, as starting cornerback Isiah Wiley was ruled academically ineligible for the 2012 season. Lane Kiffin had planned for this, and actually held Wiley out of practice for most of fall camp.

– Joe Southwick was officially named the starting quarterback at Boise State over the weekend. He’ll need all the help he can get when the Broncos open up against Michigan State- and their ferocious defensive line- on Friday night.

We are now officially three days away to the start of the 2012 college football season.

For all his opinion, analysis and articles on college football and beyond, follow Aaron on Twitter @Aaron_Torres.