Each Thursday we take a look around the world of college football and check out some of the biggest stories, best content (and sometimes worst), videos and opinions.

The big story that broke on Wednesday was the reigning Heisman Trophy winner, Jameis Winston, getting cited for shoplifting $32 worth of crab legs (and crawfish) from a local Publix grocery store [story link]. Winston’s excuse, when asked by the police three hours later, was that he forgot. Yeah, ok. The FSU fanbase doesn’t seem too concerned and yes it’s just $32 worth of groceries but rarely are you caught the first time you do something illegal. Winston has been suspended from the baseball team until he completes his community service. There is no word on whether he will be penalized by the football team as they open with Oklahoma State in Arlington. The NY Times points out that this is Winston’s fourth incident in the last 18 months [story link]. There should probably be more concern in Tallahassee than there seems to be. As usual, Twitter took off with the Jameis Winston/Crab Legs meme. SB Nation has you covered [story link].

New casting announced for The Little Mermaid which plays the Fox this July. #crablegs pic.twitter.com/iukZy8YguI

The other “not so feel good” story of the week involves Penn State head coach James Franklin. It has come to light that Franklin contacted the victim in a case involving rape charges against four Vanderbilt players (when Franklin was head coach at Vandy). Was it an innocent case of Franklin truly being concerned or did he have a more sinister plan? I don’t think this is the last that we will hear of this. [story link]

The NFL Draft is next week and the QB talk is heating up. Matt Waldman takes an in-depth look at the Gruden QB Camp for Teddy Bridgewater [story link] and Tajh Boyd [story link].

Will the Cowboys figure out how to get Johnny Manziel? [story link] 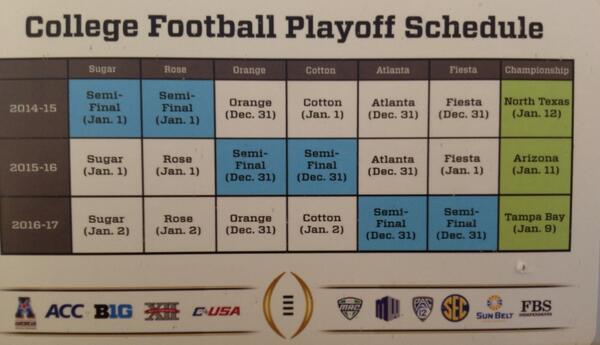 The Pac-12 Network will feature UCLA on this season of “The Drive” [story link]. For those of you who may actually get the Pac-12 network, it should be interesting viewing. Jim Mora Jr has exceeded expectation so far as UCLA coach and his team has higher expectations this year than they’ve had during Mora’s short era at UCLA.

The feel good story of the week is Penn State offensive line coach Herb Hand helped raise money for charity and was able to get his rap on in the process. [story link]

Athlon, by way of Yardbarker, has the “30 All-Time Greatest Athletes in Film. [story link]

For the beer of the week, this week instead of having an actual beer, we have a tip from Sam Adams found Jim Koch on how to drink all night without getting drunk [story link].