The only thing more predictable than the plot in another Terminator movie is a negative review for the film. Terminator: Genisys is awful, and its legacy might be killing this franchise off for good.

Like the killer robot that just can’t be vanquished, that keeps coming back when you think it’s finally dead, we’ve kept getting sequels, prequels, reboots and reimaginings of a mythology that really should have ended after 1991’s Terminator 2: Judgment Day, an action/sci-fi classic that was just never going to be topped.

But if another Terminator movie had to be made, at least take the story further or tell the story that hasn’t yet been told.

I liked Terminator 3: Rise of the Machines. We saw how John Connor’s character had progressed since the events of T2, and got an idea that life wasn’t very enjoyable for the future leader of the human uprising in the war against the machines. What I especially admired was the movie’s dark ending, in which the heroes can’t stop the nuclear annihiliation that precipitates Skynet taking over the world. That gave the mythology a sense of inevitability, that the machine-driven apocalypse was always meant to happen, no matter what efforts were made to stop that menacing future from occurring.

Terminator: Salvation didn’t really work, but at least it took place entirely in the future during the battle between humans and machines. It was the story we’d only gotten glimpses of in the previous Terminator films, dank scenes of dystopian wastelands where massive robotic skeletons are systematically wiping out those who had survived and were still mounting resistance. And that movie gave us the John Connor we had always been told about, with Christian Bale playing the warrior and leader who eventually helped overcome our mechanized oppressors. 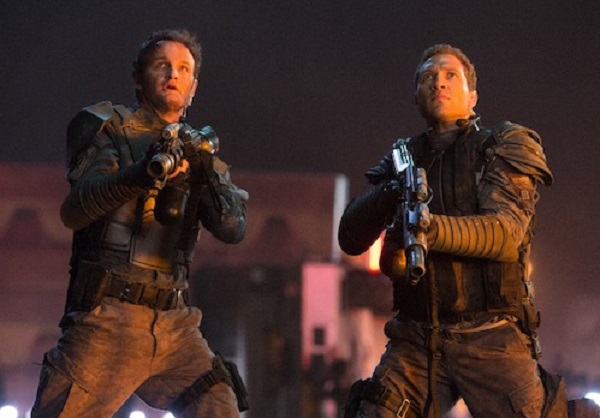 The biggest problem with Terminator: Genisys is that it’s a movie we’ve already seen. Go back into the past to change the future. The machines will eventually take over, and our reliance on technology let it happen. Those damn robots just won’t die. (Until they do.) Repeat. Again.

Only this time, there’s one big twist that’s supposed to set this movie apart from James Cameron’s 1984 original and its sequel. And I’m not certain how effective that twist is from a storytelling standpoint when it’s already been given away in the film’s marketing.

Is it possible that Paramount and Skydance Productions panicked, worried that people would think Terminator: Genisys looked like rehashed material, an overly faithful remake with shot-by-shot recreations and numerous callbacks to the first film that had become an integral part of pop culture in its 30 years of existence? So the studio marketing teams had to show audiences that this movie was different for reasons beyond new, younger actors recast in familiar roles.

[If you’ve managed to avoid the big twist, you might want to skip the paragraph. Though I don’t know how it can be called a spoiler when it was part of an Entertainment Weekly cover story on the movie, revealed in trailers and posters, and is a regular part of TV ad campaigns.]

Hey, everybody! John Connor, the guy who’s supposed to save us from the machines, is a Terminator in this one. He’s one of them now!

Even director Alan Taylor thought trailers and magazine features gave away too much. Knowing that twist going in completely takes away from whatever power its revelation might have had during the movie. I couldn’t get over that while watching the scene in which Connor’s newly sinister purpose is revealed. I felt cheated. Maybe I would have seen it coming, as something happens early in the film that probably tips off where the story will go. But I’ll never know. We’ll never know. 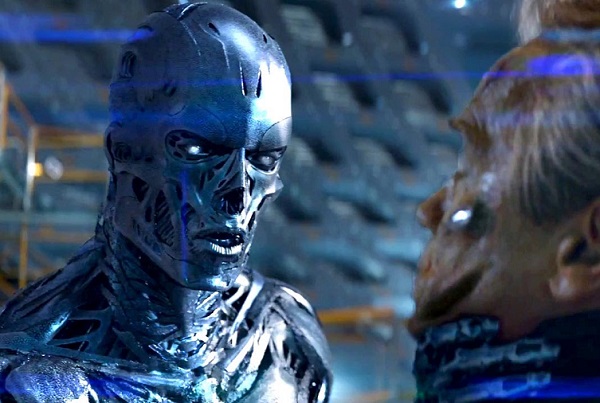 Given what happens in this new version of the Terminator story, the casting of Jason Clarke makes a little more sense. I enjoyed Clarke in Zero Dark Thirty, Lawless and Dawn of the Planet of the Apes. He’s got a brooding intensity that makes him extremely compelling to watch. That can make him a great villain or morally conflicted anti-hero. But I’m not sure he was the right choice as the inspirational leader of men Connor is supposed to be in the Terminator mythology. Maybe he works as a man who’s been beaten down and broken, an extension of the character that we saw in Terminator 3.

Yet that isn’t really conveyed in this movie. Once it’s revealed that he’s a new brand of Terminator, with a exoskeleton that looks more like a zombie and an almost organic body made of nanites, rather than solid or liquid metal, Connor is just the menacing killer that keeps coming. Clarke really isn’t given that much to do, other than constantly getting shot and blown up in increasingly explosive scenarios.

Actually, none of the casting works in Terminator: Genisys.

I’ve felt like Jai Courtney gets picked on too much by movie bloggers, but I’ve really only seen him in Jack Reacher and I thought he was a pretty convincing bad guy in that one. But I finally see where the detractors are coming from. Courtney looks like he could be a great action star and probably would have been in the 80s, when physical abilities were valued above acting talent. Yet as someone who has to carry dialogue and trade snappy banter with Arnold Schwarzeneggar and Emilia Clarke (who plays the new Sarah Connor), his lack of charisma is glaringly obvious.

I suppose Taylor and his producers deserve credit for trying to create a different sort of Kyle Reese than the reluctant, weary warrior that Michael Biehn and Anton Yelchin portrayed in the series’ previous films. But here, he doesn’t come off as someone capable of fulfilling the mission he was given, nor is he believably charming enough for Sarah Connor to fall in love with under extremely harrowing circumstances. 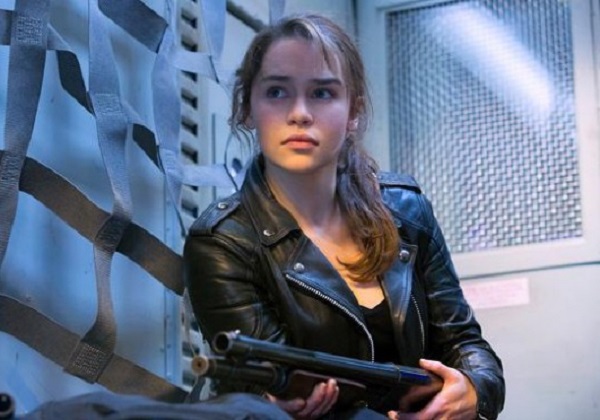 Then there’s Clarke as the most important character in the entire Terminator mythology. It’s not her fault that she’s stepping into footprints firmly established by Linda Hamilton on film and Lena Headey on television. How many iconic female action roles are available for actresses?

Like most, I’m only familiar with Clarke from Game of Thrones and believe she’s convincing enough as a girl forced to become a reluctant warrior and leader who controls dragons. It’s easy to see why producers thought Clarke could easily transition from Daenerys Targaryen to Sarah Connor. But there’s something missing from her performance. Maybe it’s the way the role was written or the direction she received, but Clarke’s incarnation of Connor is vulnerable, almost naive, rather than hardened and fierce. At times, she plays cute, probably to convey the idea that she needs to be protected.

Maybe that could have worked as the Sarah Connor who existed before robots from the future tried to kill her and Kyle Reese came into her life. But as a woman who was robbed of her childhood and any real choices in life — and was also raised by a robot in this version of the story — Clarke’s performance doesn’t feel right, even if she can look really cool firing machine guns.

None of Terminator: Genisys feels right because we’ve seen it done before and done much better. Surely, the idea was to hit the reset button on this franchise, giving it new life by creating ripples in the timeline that allowed the mythology to go in different directions and explore new possibilities, as we’re seeing with the updated Star Trek films and most recent X-Men movies. Anything is fair game when time travel is an integral part of the story, right? Just go back in time and change stuff again, using phrases like “nexus point” and “quantum field” to make it sound plausible when characters suddenly decide to jump ahead to 2017 instead of 1994 for no discernable reason.

That seems to be what Taylor, writers Laeta Kalogridis and Patrick Lussier, and the film’s producers had in mind. Unfortunately, the effort doesn’t go far enough, which makes this movie feels like a remake. And like most remakes, Terminator: Genisys fails to live up to the original. It’s time for producers and studios to stop trying, no matter how resonant the Terminator brand might be among action and sci-fi movie fans.