When AMC Entertainment head Adam Aron told Variety‘s Brent Lang that his company might try to appeal to millennials by potentially allowing texting or cellphone use in certain parts of certain theaters, the internet freaked out. Here are a few of the reactions from movie/culture critics:

Dear theaters thinking about allowing texting during movies: FOR THE LOVE OF GOD PLEASE DON'T. https://t.co/38Tum6snqf

Texting in a movie theatre? Put your goddamn phone away. https://t.co/yF41Vk8Dhp

A cinema allowing texting is the beginning of the end people. Worse than the zombie apocalypse. https://t.co/cRiaCzyNsA

And pieces suggesting this might appeal to some, like this take from Amber Jamieson at The Guardian, were promptly ridiculed on Twitter with “not using a phone is good enough for me, why isn’t it good enough for them” arguments:

Then maybe you should NOT VISIT A MOVIE THEATER. pic.twitter.com/iIb374gOlE

I am not that far from being a 20something human who went to movies and had a phone. I somehow avoided using it!

It’s clear that there are plenty of people out there horrified by the idea of someone using a phone in a movie theater, and I look forward to all of their angry e-mails. It’s worth asking “Why?” though, and that brings up a key distinction in this argument, one that AMC should keep in mind if they do go forward with any testing of this. (Judging by the backlash, they may not.)

There seem to be two principal arguments brought forward against phone use in theaters, and they’re quite different. The first is the argument that phone use ruins the experience for others. The second is that the phone user, even if they’re being respectful and not interfering with anyone else’s experience, is somehow attending the movie “wrong” and diminishing their own experience.

The second argument is a problematic one, and one that goes against what we’ve seen in other arenas. It’s one that isn’t based from first principles, but rather feels like a bunch of people who have decided that because they don’t want to use their phones in a theater, no one else should be able to.

The first argument, of phone use hurting the experience for those who aren’t using their phones, absolutely makes some sense. Bright phone screens definitely have the potential to distract or annoy others, as do phone noises. Going to a first-run movie theater typically isn’t cheap, and it’s totally understandable that those who shell out the money for it want their experience to be undiminished by other patrons. It’s also understandable that phone usage by others certainly can hurt that experience. That’s why trying to bring in a phone-friendly atmosphere across the board would be highly problematic. It would undoubtedly lead to those who don’t want to see phones being subjected to them.

However, that’s not what Aron mentioned here. He said “we’re going to have to figure out a way to do it that doesn’t disturb today’s audience” and that possibilities included a texting section or making certain theaters texting-friendly.

So, presuming that AMC was able to find a way that those who wanted to use their phones could do so without hurting the experience of others at all (and there are potential ways, from texting-friendly sections within showings that can’t be seen by those who don’t want to see phones, to making entire showings texting-friendly), what would the opposition be?

That’s where the second argument comes in, and it’s a more problematic one. It’s full of people yelling that wanting to look at a phone in a movie theater is somehow ruining the experience for the phone user, such as Singer’s “But in the long term you have essentially trained your next generation of customers that the movie theater is a place to go to look at a cell phone, not a place to go and share an emotional experience with others.” It’s full of people trying to police the behavior of others, and argue that their way of experiencing things is the only way.

The great advantage of the connected world is it lets us transcend our physical location to engage with those we want to, wherever they are.

It’s true for sporting events, whether in-person or on TV: You can discuss what’s going on with fans, reporters, analysts and others whose opinions you care about, not just the stranger next to you in the bar or in the adjacent seat. It’s true for TV shows: Your discussion of Game of Thrones or The Walking Dead can be with friends, with fans or with critics from all over the globe, not just those who happen to be in your living room. It’s true for speeches at conferences, which are tweeted out and spur all sorts of engagement beyond the immediate audience. It’s true for books, games and other forms of media discussed online, and it’s even true for movies, once they’re out on Netflix or DVD.

Tweeting through a movie and engaging with those who have thoughts on it can be a truly rewarding experience, and much of Twitter knows this when it comes to older movies, from either doing so themselves or following those who do. The question is why some insist that first-run movies are somehow separate from all these other forms of culture, somehow immune from as-it-happens world-spanning discussion.

A key element here is the idea of “distraction,” and it’s one that is mentioned in resistance to second-screen experiences around all these other forms of culture. We do see plenty of criticism when it comes to those on their phone at the ballpark, for example.

It is certainly true that you can miss something while watching if you’re looking at a phone instead, but the idea that the Platonic form of experiencing something comes from unceasingly staring at it also has problems. There are plenty of times where a day at the ballpark can be enhanced by looking up the batter’s stats or trade history, where a TV show can be enhanced with a quick IMDB perusal to figure out where you know that guest-star from, or where anything can be enhanced by discussion with those not physically present, whether that’s via text, Twitter, Facebook or anything else. Rapt stares at the thing in question aren’t necessarily the one and only way to experience something.

Beyond that, the idea of “emotional experience with others” which Singer brings up is really an excellent argument for why phone use should be allowed in theaters, if it can be done without disturbing those who don’t want it. Now, mileage here may vary, depending on how introverted or extroverted you are, how comfortable you are with complete strangers, and how much you care about their reactions. There undoubtedly are people who care about how the rest of the audience physically at a theater perceives something, and some may even start up a discussion with strangers afterwards. For many, though, attending a movie is a very solitary experience, even if it’s in a room full of people.

For those people, the opinions that matter are located elsewhere, whether that’s from geographically-removed friends, trusted acquaintances or prominent critics. For the more shy among us in particular, the internet has been a fantastic way to break down barriers and allow you to discuss your opinions in a safe, judgment-free way on specific subjects with those you select. This can make watching sports or TV or older movies alone much more community-based, and much more enjoyable. Are we sure it can’t work for movies? 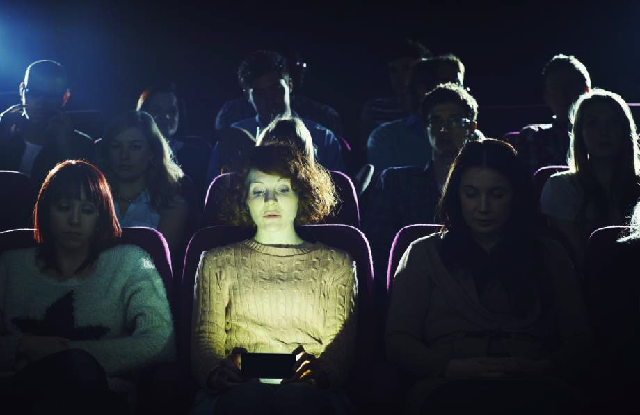 When it comes to TV, these opinions are often expressed in real time during the airing of a popular show, and those real-time discussions can enhance the episode, not detract from it. They provide the “emotional experience with others” Singer is talking about, which in many ways can be more powerful on the web than it is in person, given that now you’re engaging with people whose opinions actually matter to you.

However, there are unquestionably further logistical challenges with implementing this kind of second-screen discussion with first-run movies than there are with other forms of media. Sports events are live at a certain time, as are TV shows (except for West Coast divides and DVRs), so it’s much easier to have a geographically-removed shared conversation about them than it is with movies.

Still, there are ways around this. It’s quite possible to mute people on Twitter to avoid spoilers, or to warn your followers you’re going to be discussing a new movie. Or, if you’re only looking to discuss with a particular group, there are more private options like Skype chats, GChat, Slack or group texting. The technology for movie discussion is out there, and it’s currently largely used to discuss movies remotely after seeing them. There’s no particular reason it can’t be used to discuss movies remotely while seeing them.

In fact, these sorts of discussions have a huge advantage over in-person ones. Everyone’s complaining about texting in theaters, but loud talking can be even worse, no? It’s certainly noisier than silent texting. So, in some ways, texting (and its counterparts) may provide a way for real-time discussion of movies that’s actually less obtrusive than doing so without technology would be. It would have to be done carefully, but if there’s a way to put texters where no one else will see them typing, how would it hurt the non-texters?

Again, the key in any discussion of texting during movies should be whether or not it will diminish the experience of others. There are plenty of people who have strong feelings about it from that standpoint, and care should be taken to do this in a way that’s not going to hurt their movie-going experience. However, it’s harder to have sympathy for those who are arguing that those of us who might want a live second-screen experience during movies are somehow violating the sanctity of movies and experiencing them incorrectly.

A movie theater isn’t some sacred site; it’s a place to experience entertainment. Experience is individual, and in just about every other medium, a second screen is capable of enhancing the experience for many of us. Movies don’t seem to defy that, especially given how great second-screen discussion of them on DVD, streaming or cable can be. It seems problematic to permanently bar that kind of second-screen discussion from movies based not on if it would disrupt others, but rather on if it’s “how one should watch a movie.”