A year ago, the free agent of free agents, Albert Pujols, was available to any team in baseball. OK, realistically he was only available to the few that could afford to offer him an insane amount of money, but nonetheless…This year's 1B crop is riddled with mediocrity and high-stakes gambles at the top-end.

1. Mike Napoli – Napoli is also my top-ranted catcher and, in my opinion, he'll likely move to a full-time 1B/DH role by the end of his next contract. His power numbers should stay consistent, but he has battled nagging injuries over the last couple of years. 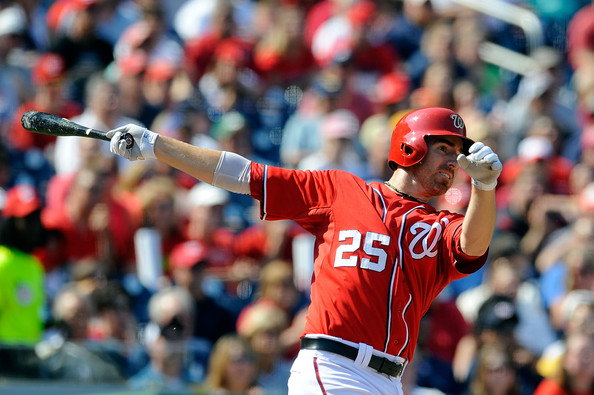 Early prediction: The Red Sox may be rebuilding, but they aren't going to stay quiet this offseason. 2 years and around $24M.

3. Kevin Youkilis – For the last few seasons Youk has had trouble with injuries and seen a sharp decline in his offensive output. At age 34 in 2013, there is definitely risk in bringing Youk aboard, but there is still some power/plate discipline upside that could flourish in a part-time DH role.

Early prediction: The White Sox keep Youk's socks white and bring him back to the south side of Chicago. 2 years, around $18M.

4. Lance Berkman – After a monster bounce-back season in 2011 (.301/.412/.547 with 31 home runs), Berkman never really got going in 2012 as he tried to fight through a knee injury. Heading into 2013 he'll be 37 years old and would benefit most by moving to the AL so he can DH at least part-time. There has already been speculation that Berkman might retire, or that he could reunite with his long-time employer, the Astros — now in the American League West — to serve as a mentor to their young players. If healthy, Berkman would provide any team with excellent on-base skills and power, but at this point that is a big if. I could see Houston, Oakland, Cleveland, and Tamp Bay all looking to buy low.

Early prediction: Berkman heads back to Houston to finish his career where it started. 1 year, around $9.5M.

5. Carlos Pena – Pena's best days are certainly behind him, but power hitters with plate discipline have historically held those two skills into their late 30s. He'll land somewhere on a one-year deal.

6. James Loney – A team looking for a low-cost, defensive minded first baseman is sure to give Loney a shot, but at this point in his disappointing career he's nothing more than a veteran placeholder.

Early prediction: The Indians so what they did last offseason when the signed Casey Kotchman and hoped for the best. 1 year, around $4.5M.

7. Aubrey Huff – Huff followed a disappointing 2011 season with an injury plagued 2012 in which he only played in 52 games, ending the two-year, $22M deal he signed after a 26 home run, .891 OPS season in 2010. Huff injured his knee jumping the dugout fence to rush the field after Matt Cain's no-hitter. At 36 years of age and back-to-back poor seasons, there won't be many teams jumping for his services this offseason. However, a healthy Huff still has enough upside to put up some decent offensive numbers at the right price.

Early prediction: The Marlins give Huff a shot to bounce back. 1 year, around $3M.

8. Carlos Lee – At 37 years of age and with a massive decline in power production last season (only nine home runs and a .365 SLG), it might be a tough free agent season for Lee. Still, there are teams out there in need of a 1B/DH, so he should land a gig at a low-cost one-year deal.

Early prediction: Lee stays in Florida, but switches leagues and joins the Rays. 1 year, around $3M.

9. Casey Kotchman – After a career year with the Rays in 2011 — which was aided by a career high .335 BABIP — Kotchman not only came back down to earth, but crash landed when he got there. He still flashes some good leather and should bounce back at least a little with the bat (.233 BABIP last season).

10. Ty Wigginton – Teams looking for a little versatility and some pop in a part-time role will be looking to give Wigginton a big-league roster spot, but he's more of a bench player at this stage of his career.