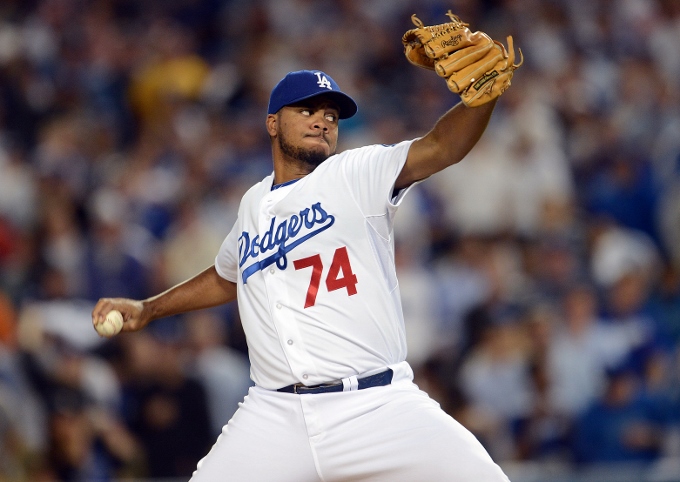 Kenley Jansen was so dominant as the Dodgers’ closer in 2013 that it’s hard to believe he didn’t officially take over the role until June 11. Once Don Mattingly came to his senses, the 26-year old Curaçao native finished the 2013 season with 28 saves in 32 chances, a 1.88 ERA, .86 WHIP and a 13.0 K/9. Opponents batted just .177 against Jansen in a career-high 75 appearances for the NL West champions. At 6’5” and 220 pounds, the converted catcher cut quite an imposing figure on the mound in the late innings for the team that won 92 games en route to the NLCS.

Jansen returned home to Curaçao last week to join current and former major league players from the small Caribbean island for a baseball homecoming for the first annual Curaçao Baseball Week. We caught up with Jansen to talk about coming home to Curaçao, having Mariano Rivera as a role model, and what’s next for the Dodgers. 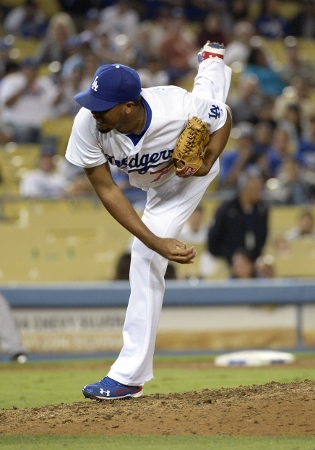 Amanda Rykoff: Which players inspired you growing up?

Kenley Jansen: Andruw Jones. Watching him in the World Series against Pettitte hit two homers. You can say that opened up space for us, for all of us, me, [Braves’ shortstop Andrelton] Simmons and make it a little easier to bring scouts here to watch us. And now we are all in the states now. It was fun watching him with the Braves and it’s still fun being a part of this and enjoying it with him.

Amanda Rykoff: How closely do you follow other players from Curaçao in the majors?

Kenley Jansen: I cheer for all of them. I cheered for Simmons even when he took me deep. I mean I was kind of mad a little bit but in the end he was doing his job. I wanted to strike him out, he took me deep. That’s how baseball is. I support all of my buddies from Curaçao and it’s great watching all of them now make it happen and trying to open more space for all the kids coming up now and progressing and get a chance. That’s big right now for Curaçao.

Amanda Rykoff: You switched from catcher to power pitcher. What was the adjustment like for you?

Kenley Jansen: It was a tough decision back then. To me I feel like it was a life learning experience. I almost wanted to quit and I wanted to ask for my release. I was almost suspended. Talking to my family and all these people and I decided to give it a try. And now today — it took me a year to be in the major leagues — and today I’m a closer just doing it. It’s pretty awesome, it’s pretty amazing that I’ve learned that you don’t know what your talent is. You gotta stay humble and give it a try and now it’s bringing me a lot of success.

Amanda Rykoff: What pitchers do you model your game after?

Kenley Jansen: I model myself after Mariano Rivera the most. Because when I came in the major leagues, even [Dodgers adviser] Charlie Hough didn’t tell me then, but he knew that my ball cut a little bit like Mariano but he didn’t want to tell me. Now I hear the story that he was telling all the coaches that I didn’t know what kind of pitch I had, what kind of weapon I had. Now that I’ve come to the major leagues and see scouting reports and stuff like that, I went and looked to Mariano’s tape and the hitters that he faced that I’m going to face that day to see how he pitched. And then I started to watch him even more, how he takes care of his business, how he controls the game because we have similar pitches. That’s who I idolize now and I’m still learning and one day hopefully I can sit down with him and pick his brain and I can become a better pitcher.

Amanda Rykoff: Did you have a chance to talk with Mariano when the Dodgers and Yankees played in 2013?

Kenley Jansen: No [laughs]. He was a little busy this year with is retirement and being at Dodger Stadium he wanted to sit with the employees of the organization and talk to them and pick their brains. I met him but didn’t have a great chance to sit down to talk to him but one day hopefully I can. I’ve got guys like Jose Vizcaino who played with him and he’s got his phone number and [former Yankees and Dodgers bullpen catcher] Mike Borzello and even Don Mattingly. I have a couple Yankee connections and I see Joe Torre all the time in the clubhouse coming up so I’ll definitely get his contact info and one day hopefully go down to Panama wherever he is and sit down and talk to him and learn more about this.

Amanda Rykoff: Tell me about your love of fishing.

Kenley Jansen: It’s become one of my favorite hobbies and a great story that you will listen one day Don [Mattingly] will tell you with us out on the water. I’ll leave it there for him. That’s become one of my hobbies and I really enjoy it. On weekends, I go out there at five in the morning and try and catch fish. Now I’m enjoying a great island and relaxing. This is priceless and it’s taking all the stress away from me and you don’t want to think about baseball right now. But when December starts, I’ll kick back into baseball gear, but this time is really helping me right now to have time for myself and rest a little bit.

Amanda Rykoff: What advice do you have for the kids at the clinics during Curaçao Baseball Week?

Kenley Jansen: The best advice I have for the kids is to stay in school. That’s number one. School is everything. It’s hard to get into the major leagues, it’s hard to stay in the major leagues. Play any sport if you have the talent, yes stick with it, but if you go to college or high school and get your degree and finish your school I would say that’s the best thing to do because no matter what happens you will still be able to get a job. That would be my biggest. The next one is to stay humble. If you stay humble, that will help you a lot. You will learn a lot from that, and you will become a better person in life.

Amanda Rykoff: How surprised were you with the Dutch national team’s success at this year’s World Baseball Classic?

Kenley Jansen: I wasn’t. We all were hungry in 2009 and we all wanted to beat those teams. I think those teams were surprised by us but we came in and played hard and were the underdog and that helped us. Now teams like the other countries see us now and think, “We’re not going to play around no more.” To see these guys come all the way to the last round and lose against the Dominicans is huge, you see how much talent we have here, and we play only like 15 games during the season here in Curaçao. And now to go jump from 15 to go play 60 games in rookie league it’s pretty impressive you see how much talent we have here. We have to keep learning and keep being better.

Amanda Rykoff: The Dodgers had a great 2013 season and reached the NLCS. What’s next for the team?

Kenley Jansen: What’s next? Now we’ve been there and we know how the playoffs are and get that taste. You get that taste of losing also and you don’t want to have that feeling of losing. We have the team, we have the ability, we have the talent. I think we’re going to be great, even better, next year. I think starting slow with a lot of injuries and how tough we stayed and focused and Don was on the hot seat and he kept cool and kept the clubhouse in one piece and now he can become manager of the year. It was a learning experience for all of us. I think we’re going to be even better and it’s going to be scary next year with the Dodgers.