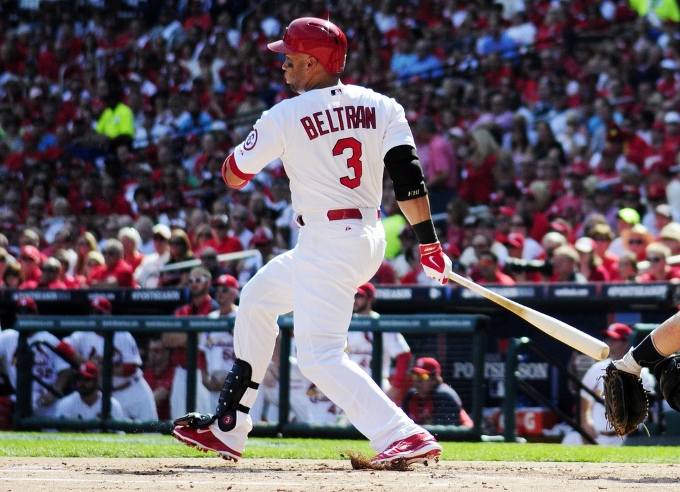 St Louis Cardinals outfielder Carlos Beltran turns into a freak in October. Going into Monday's game with the Pirates, Beltran has a .360/.463/.794 career Postseason line. That's really, really good – in fact, his 1.257 OPS is the highest ever among players with at least 40 Postseason plate appearances.

Yet, there's this sentiment that maybe he's not as good as you'd think. Beltran's 16th career Postseason home run passed Babe Ruth to put him alone in eighth place on the all-time list, and that's getting written off as "well, there are just so many more games now, so of course he passed Ruth!"

What if I told you that Beltran has 164 career Postseason plate appearances, three *fewer* than Ruth? Well, it's true. Beltran has hit a home run in every 8.25 Postseason at bats. Ruth? One home run in every 8.6 at bats. To put both of those numbers into context, the only players with better single season HR/AB statistics are Barry Bonds and Mark McGwire when they were breaking records by the handful. and Ruth in his absurd 1920 season. Carlos Beltran hits home runs at a better rate in the Postseason than Bonds did when he homered 45 times in 373 at bats in 2004. That's pretty ridiculous.

If you look at isolated power (which is slugging percentage – batting average), Beltran has a .434 mark in the Postseason. Ruth's is just behind him at .418. The only full seasons in baseball history better than that were put together by guys named Bonds, McGwire, and Ruth. That's absurdity at its purest form.

Beltran's not putting these numbers together with just absurd power, either. In the Postseason, he's walking at a solid 15.9% clip. Ruth has the edge there with a 19.7% career Postseason walk rate, but there's a bit more to the story than that. Beltran has struck out fewer times than he's walked, in just 11.6% of his plate appearances. Ruth on the other hand, was punched out in 18.0% of his Postseason plate appearances. That's not a bad thing, of course.

Another thing I found interesting about Beltran's Postseason career: he's stolen 11 bases without being caught. Now, that's not a ridiculous number, but consider this: Kenny Lofton stole 34 Postseason bases and was successful 85% of the time. Rickey Henderson was right behind him at 33 steals and an 84.6% success rate. Omar Vizquel nabbed 23 bags at an 88.5% rate. Roberto Alomar? 20 bags, 90.9%. Everyone gets caught, but Beltran hasn't yet – and he's stolen a bag in every series he's played in (excluding last year's one game Wild Card playoff), except for this year's NLDS with the Pirates.

Beltran might lack most of the counting stats that guys like Derek Jeter, Bernie Williams, and Manny Ramirez might have, but his pure rate stats are nearly untouchable. There might be a ton more Postseason games now, but Beltran has done all of this damage in just 37 games. Jeter has played in more than four times as many games. When you're looking at compilers, look at the guys who have logged at least 300 career plate appearances. If Beltran and his Cardinals drag every series they're in this year to the maximum amount of games, he still might have fewer than 250 career Postseason plate appearances, and Beltran will still have played in 100 fewer games than Jeter. If that happens and Beltran continues his Postseason heroics, he might have more Postseason homers than anyone but Manny Ramirez by the end of October – in 200+ fewer plate appearances.

One more quick note: Carlos Beltran has been intentionally walked just once in his Postseason career. It happened in Game 6 of the 2004 NLCS by Jason Isringhausen with the Cardinals leading 4-3. Isringhausen walked Beltran with Morgan Ensberg on second base to bring up Jeff Bagwell (HE WALKED BELTRAN TO GET TO JEFF FREAKING BAGWELL) with two outs. Bagwell singled in Ensberg to tie the game. Beltran proceeded to steal third base (along with Bagwell stealing second) before Lance Berkman struck out to end the inning. He's never been intentionally walked in another playoff game despite eight Postseason homers in his next 113 plate appearances.