This spring, some teams are showing off recently improved rosters while others are going the other way. But all teams have made one similar addition: A clock in center field and another behind the plate.

These pace of play clocks are among a few new rule enforcements that aim to speed up the game of baseball at least a little bit. The question remains, however, how much time, if any, is being saved by these changes, particularly the two-minute, 25-second clock that runs between innings? With some quick math, we may be able to figure that out.

Looking at every game in Spring Training from March 22, there were 16 games that averaged two hours and 43.2 minutes per game. I used a recent date because early on, pitchers were exceeding the clock from time to time, but they appear to be used to it at this point. 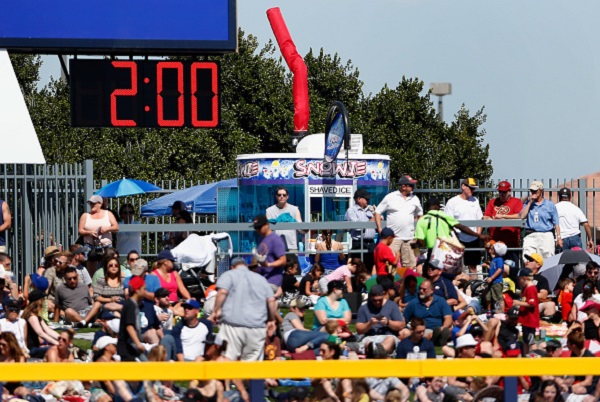 PEORIA, AZ – MARCH 08: A clock counts down time between innings during the spring training game between the Colorado Rockies and the San Diego Padres at Peoria Stadium on March 8, 2015 in Peoria, Arizona. (Photo by Christian Petersen/Getty Images)

The purpose of breaking things down to the smallest level is to be able to compare games from multiple dates with the least amount of error. While these are just slight glimpses in time, taking out as many variables as possible — such as the effect of a home team winning without playing the bottom of the ninth, extra inning games and other similar issues — should make this quick check much more accurate.

For comparison, there are two other dates placed under similar scrutiny. These are the same date from a year earlier — March 22, 2014 — and for a regular season comparison, April 19, 2014. Each of these, including the 2015 date, were weekend games, for what it is worth, with between 14 and 16 games played, only one of which went to one extra inning.

The reasoning for including a regular season 2014 game is that Spring Training games are expected to move more quickly, as there are fewer mid-inning pitching changes, hitters are more aggressive and pitchers are less careful. If this is the case, we can expect games during the regular season to be similarly longer despite the changes.

As expected, a full slate of normal regular season games (those without playoff implications or a Red Sox vs. Yankees series) tend to last a few minutes longer than a day of meaningless Spring Training matches. The four-second difference in plate appearances there equates to four minutes and three seconds total with 71.7 plate appearances per game, an increase that will likely remain similar in 2015. Essentially cancelling out the decrease in game time this year, 2015 regular season games could be expected to last as long as 2014 Spring Training games. 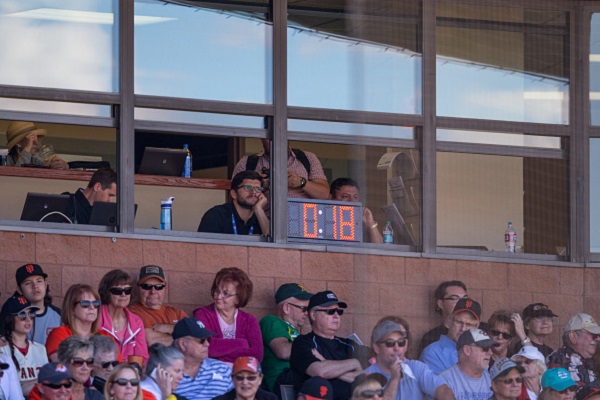 SCOTTSDALE, AZ – MARCH 4: The new baseball clock shown counting down between innings during a spring training game between the San Francisco Giants and the Oakland Athletics at Scottsdale Stadium on March 4, 2015 in Scottsdale, Arizona. (Photo by Rob Tringali/Getty Images)

While it may seem insignificant, five-and-a-half minutes will really add up over the course of a 162-game season. Looking at the whole season, 14 hours and 51 minutes would be saved (and even more time when considering extra-inning games), most of which would have otherwise been filled with commercials or useless announcer talk while a pitcher warms up longer than he needs to.

Commissioner Rob Manfred has already taken some heat for his willingness to change the game of baseball so quickly after beginning his time in office, but this change appears to be both insignificant enough to be inoffensive, yet significant enough to be worthwhile. No fan will reasonably notice a decrease in five seconds per at-bat per game or even the five minutes total, but saving the fans from watching near 15 hours of repeated ads and necessary stories is something everyone can appreciate.