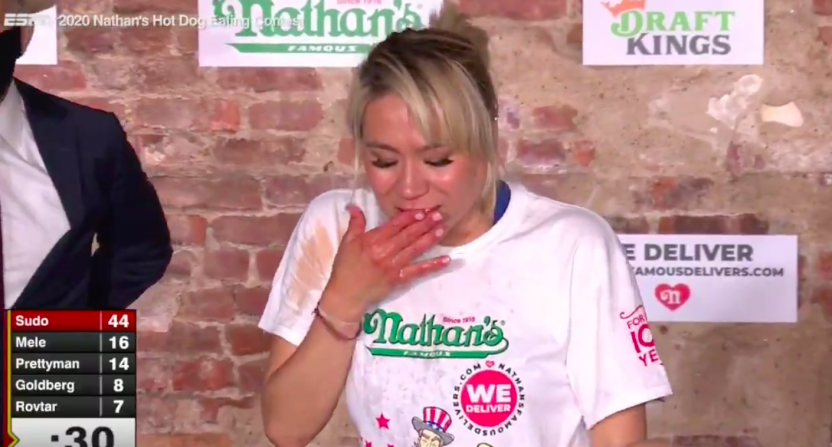 When you think of the Nathan’s Famous Hot Dog Eating Contest, you probably think of Joey Chestnut, who has dominated the “sport” on the men’s side for 12 years coming into 2020. But make sure you’re also namechecking Miki Sudo, who entered 2020 having won the women’s competition for six-straight years. Not only were both back in 2020 but both put on record-breaking performances to dominate their respective sides in this year’s socially-distant version.

Sudo didn’t just win her seventh-consecutive contest on the women’s side, she obliterated her competitors and the world record. The 34-year-old finished with 48 and a half hot dogs, breaking Sudo’s own record of 41. Sudo now passes Takeru Kobayashi, who won six Nathan’s contests, on the all-time wins list.

Sudo had previously said that she wasn’t a fan of the new setup, which was indoors and away from fans due to the Covid-19 pandemic. Competitors were also separated by plexiglass barriers and judges were at least six feet apart from them. Instead of fans cheering them on, it was members of the ESPN production crew who had to motivate the eaters.

Sudo gave credit in victory to her boyfriend and training partner, Nick Wehry, who also happened to be taking on Joey Chestnut on the men’s side later. Alas, there was only room for one championship in their relationship this year as Chestnut continued his reign of edible terror on the men’s side.

75 HOT DOGS AND BUNS for Joey Chestnut, a new world record and 33 more than his closest competitor this year.

All Chestnut accomplished in his fifteenth hot dog competition was devour 75 hot dogs and buns in 10 minutes to establish a new world record. That tops the 74 he ate in 2018. According to a well-placed ESPN stat bug, he also became the first competitor to down 1,000 hot dogs in the competition.

It’s been a strange year for America but at least we still have one place we can look to for dependability and durability. If nothing else, gorging yourself on hot dogs is what will see us through these dark days.