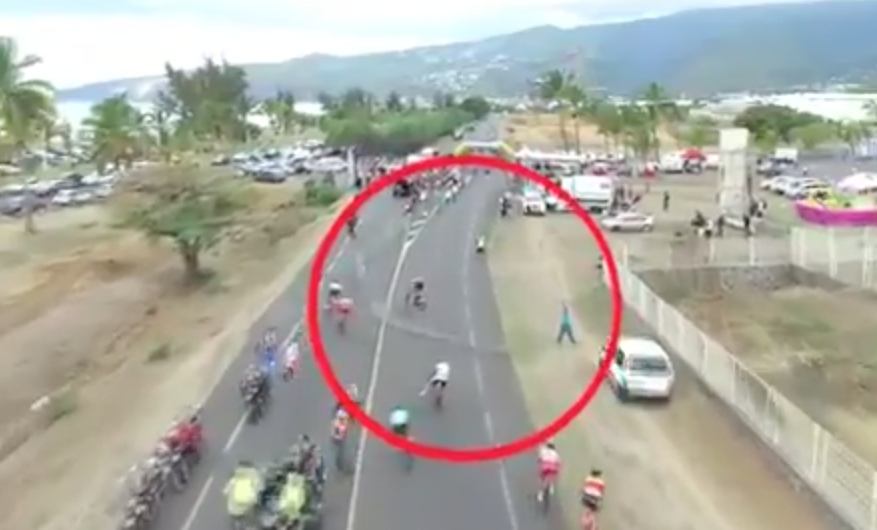 If you saw the Tour de France this past July, you saw how fans have sometimes inserted themselves into a cycling race, usually to the detriment and sometimes danger to the riders themselves. There were fans pulling other fans away from riders, a fan accidentally deflating an inflatable banner causing a crash and fans caused a bottleneck up Mont Ventoux causing an understandably confused Chris Froome to crash into a camera motorcycle and run up the mountain afraid he was losing the race.

But this scene may top them all. Apparently the father of one of the riders pulled a fence separating the fans from the riders across the road during a cycling race on a French island off the coast of Madagascar that caused riders to crash.

Essentially, this person used the fencing as some sort of spike strip that police officers would use and cyclists who were speeding toward that at 50 mph on skinny cycling tires had no shot at getting past it. Some veered into the spectator area (which presented a danger to them) while others risked going over the fence and crashing while others took to the grass. He was upset that race officials didn’t stop the race after his son crashed earlier so he could catch up to the peloton. Normally when someone crashes, if it’s early enough, the group slows down to let them catch up but it sounded like this didn’t happen. Very rarely does a race get “stopped” in order for someone to catch up. And in the very rare time that happens, it’s because of someone unforeseen that has nothing to do with the race. Like a train crossing the road that cyclists are using and some cyclists get stuck behind the crossing.

Either way, it’s a very classless and dangerous move to do regardless of the reasoning or justification. When a cyclist crashes, particularly at that speed, the best case scenario is that they are bloodied, bruised and will be incredibly sore the next morning. And since this is a nine-day race, they still have to race while sore, likely riding for hours on end. Worst case scenario, they break a collarbone or some other bone and have to abandon. A pic posted by one of the riders who crashed looked pretty rough.

Translated from French thanks to Bing, rider Enzo Bernard tweeted “Hectic day on the 1st stage of the tour of the meeting… And a fool who puts the lives of athletes in danger.”