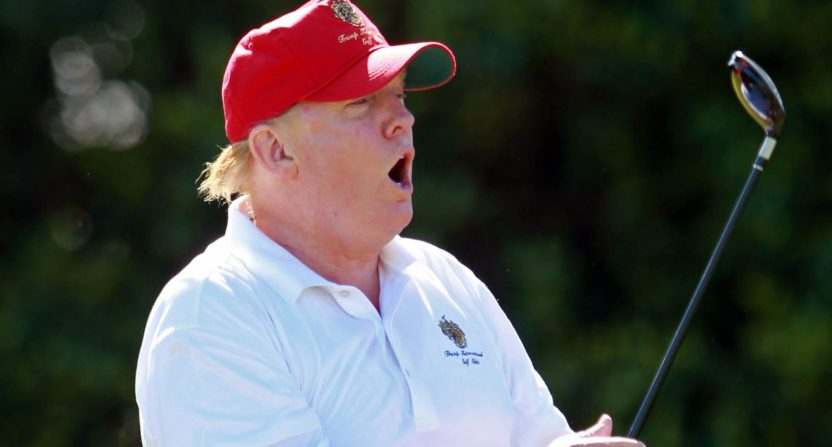 Donald Trump and Phil Mickelson were both expected to be key figures at the 2022 PGA Championship and the former president is outraged at their absence.

Trump National Golf Course in Bedminster was originally scheduled to host the major tournament and Mickelson was expected to defend his 2021 PGA Championship title. But Trump’s involvement in the 2021 attack at the United States Capitol, followed by Mickelson’s desire to align with a Saudi-backed golf league influenced both of their omissions. Trump has seemingly struggled to cope with the realities of the tournament going on without him or Mickelson, calling golf writer Michael Bamberger to grumble about the PGA.

“I’ll tell you this,” Trump said. “If you took a poll inside the PGA, the 28,000 members of the PGA of America, I’d be 97 percent, I believe. I’d be way up there. And people are really angry at what the PGA did to me by taking that tournament away. And I had nothing to do with January 6th. They’d be very angry at what they did.”

If you checked in with the PGA on Jan. 5, 2021, they would have told you the 2022 PGA Championship will be held at Trump’s Bedminster property. But despite his claim of having “nothing to do with January 6th,” Trump spent months trying to overturn the 2020 presidential election and encouraged his crazed supporters to attack the U.S. Capitol while doing little to temper the insurrection. In the days following the attack, the PGA Board of Directors voted to pull the tournament from Trump, later choosing to play the event at Southern Hills in Tulsa, Oklahoma.

The next notable golf tournament that will be held at Trump National in Bedminster will be the third event on the LIV Tour, the league being funded by the Saudi government.

“I know [the PGA Tour] is putting a lot of pressure on the players [not to play],” Trump said referring to the Saudi-backed golf league that Mickelson has applied to play in. “I don’t think it’s legal. It’ll end up going to court someday. And you’re gonna find out whether or not the Tour has the Constitutional right to stop them, to preclude them from playing. I think they’d want to play. Phil got himself into a little trouble with his explanations. That could have been better handled, I guess. But Phil’s Phil. Why is he not playing? What’s the real reason he’s not playing?”

Mickelson withdrew from the 2022 PGA Championship one week before the event teed off, negating any chance of defending his 2021 title. The 51-year-old with six major victories was reportedly welcome to compete at Southern Hills.

No explanation was given for his withdrawal, but it’s hard not to connect the dots and figure it has something to do with the LIV. Either because of his continued interest in playing in the league, or a reluctance to publicly answer questions about the Saudi-backed tour.

Earlier this year, Mickelson called the Saudis “scary mother*ckers,” acknowledging “They killed [Jamal Khashoggi] and have a horrible record on human rights.” But that wouldn’t stop him from wanting to participate in the league. It was only after backlash to the comments that Mickelson issued an apology and attempted to distance himself from the LIV.

“Phil is, you know, a good guy, a great representative [for golf],” Trump added. “You know, with the smile and the whole deal. And Phil should be out playing in this championship. His manner, when he walks around with a smile, tipping the cap, the whole thing. You know?”

A great representative for golf, except when he’s endorsing the “scary mother*ckers” in Saudi Arabia and encouraging other golfers to join their startup league.