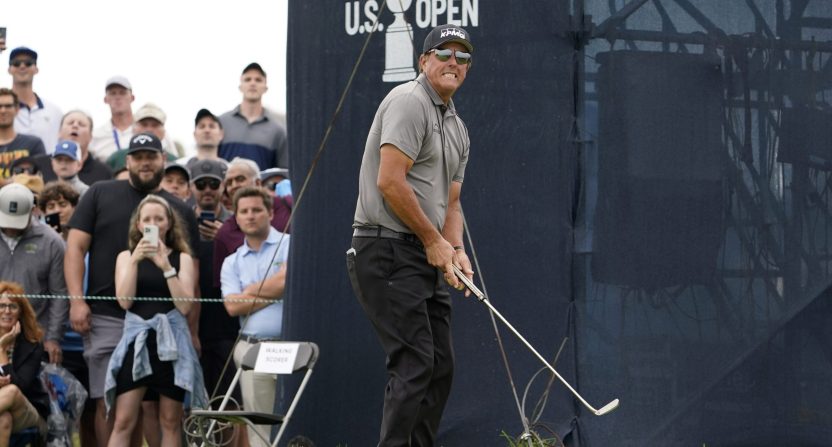 The 2022 Masters was a fantastic weekend for golf fans as Tiger Woods made his return to the greens one year after a car accident and, despite Rory McIlroy’s furious finish, Scottie Scheffler walked away with the green jacket.

There was one missing element from Augusta National, however, that many fans couldn’t help but notice. For the first time since 1994, Phil Mickelson did not play in the Masters. After Mickelson took some shots at the PGA and some tasteless comments about human rights violations in Saudi Arabia, Lefty took a leave of absence from the tour that extended into the major event. While it was his decision not to play, many hoped that Phil would return to the links soon enough.

It appears as though the U.S. Open is where Mickelson plans to make his return. The 51-year-old has filed an entry to play at the golf tournament, which will be held at The Country Club in Brookline, Massachusetts. It’s also worth noting that Tiger Woods has submitted an entry as well.

Phil Mickelson and Tiger Woods have filed entries for the @usopengolf. Entries opened on February 23rd and close April 13th at 5pm. pic.twitter.com/yCaT03nLK5

Mickelson hasn’t appeared in a PGA Tour event since he missed the cut at the Farmers Insurance Open in January. His last win was at the Charles Schwab Cup Championship in November 2021.

It remains to be seen if Mickelson (and Woods) does in fact play at the U.S. Open, but it does appear that he intends to when golfers take to the course on June 16. It should be an interesting time for him and the golf world.

In the meantime, there were some strong reactions to the news of Phil’s potential return.

I don’t know for sure about Phil, but I’m pretty confident that Tiger can afford to wait past the deadline to withdraw and give up his entry fee… https://t.co/nH1FVXogFR

Looks like Phil hasn't moved to Riyadh yet. https://t.co/46U0RGc8ZN

Hopefully they get accepted… https://t.co/CLeeu1jl2O