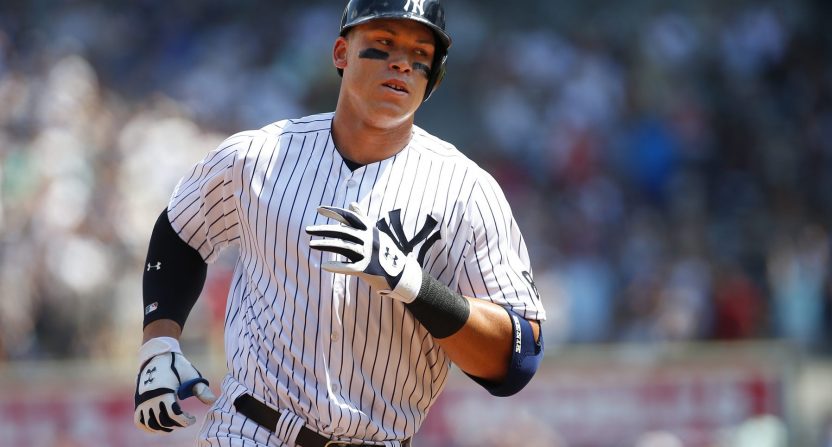 After months of predicting and speculating about the upcoming baseball season, it sure is nice to have some actual stories to talk about and analyze.

Three and a half weeks of baseball might not be enough to know everything the new year has in store, but as April nears an end we can begin to think about what is going exactly as we expected and what we never saw coming.

With that in mind, we asked our MLB staff to share the thing that has surprised them most over the first fews weeks of this MLB season. Here are their answers:

Brandon Liebhaber: Eric Thames is the obvious answer here, but I’m going to go with Toronto’s slow start. Did I expect the Jays to be a juggernaut in 2017? No. Heck, you could have convinced me they would miss out on the postseason given how competitive the American League East figures to be. But for a team that has played into October each of the last two years to start as poorly as they have is surprising. Sure, they lost Edwin Encarnación but much of the team’s core is still intact.

I know injuries have taken their toll, but the roster should be able to do better than six wins in 20 games to start the season. The nature of baseball makes it such that we aren’t supposed to overreact to small sample sizes, but this may be an occasion where it is acceptable. Few teams go from where Toronto is now to the postseason. Throw in the fact that they’re in a division with no easy opponent and we might be looking at a potential playoff team selling sooner rather than later.

And if you think things may start turning around soon for Toronto, might I suggest looking at Tuesday’s starting lineup which had Russell Martin at third base? Been that kind of a start for the lone Canadian team in the league.

Joe Lucia: The NL West as a whole is going how no one expected it. The Rockies are a juggernaut? The Diamondbacks look coherent again? The Giants are struggling to get out of the basement? The Dodgers still haven’t taken off like expected? The Padres are… merely bad, instead of terrible? I don’t think anyone expected any of these teams to play as they have through the first 20 games of the season, and while I don’t think these trends are going to continue, I’m stunned at where we are roughly 15% of the way through the season.

Matt Clapp: Well, the answer should be Eric Thames, and the Brewers’ power as a team (39 homers, eight more than any other team).

But to mix it up, I’ll go with Aaron Judge.  The 25-year-old (since yesterday) is a 6’7″, 275-pound monster, and he’s hitting massive dingers with ridiculous exit velocity just about every other game.

We need to see a lot more than a 44-game sample size, of course, but it’s hard to not think of Giancarlo Stanton when you watch Judge right now. Let’s get this dude in the Home Run Derby.

Ian Casselberry: I presume we’ll have a fair amount of Eric Thames and Arizona Diamondbacks from our staff, both of which have been big surprises. But I’ll try to make this about me and call myself out. My pick of the Seattle Mariners to win the AL West isn’t looking good so far. Sure, it’s early and a 5.5-game deficit is not too large to overcome in April. But what’s been most surprising about the Mariners’ bad start is how bad their pitching has been, with the exception of James Paxton. Even normally reliable and durable Felix Hernandez has faltered, going on the DL with shoulder inflammation.

Seattle has allowed the second most runs in the AL, and consequently has the second-highest team ERA in the league. But the real problem has been the bullpen, currently dragging a 6.34 ERA which is also second-worst in the AL. Basically, the Mariners have the Tigers to thank for not being DFL (not a sabermetric acronym) in each of those categories. It’ll be impossible to compete for a division title with that kind of performance, no matter how well Mitch Haniger is (or was) playing.

Alex Putterman: I’ll go with the answer that was apparently so obvious that none of you would pick it.

The biggest surprise of the season is Brewers masher Eric Thames, he of the 11 home runs and 1.393 OPS. Because here’s the thing: It’s not just that Thames has been a great hitter. He has been the best hitter in the entire league. He’s got a higher slugging percentage, OPS, OPS+ than every single other National League player, including red-hot Bryce Harper. It would have been surprising if Thames had an OPS of .900. That fact that it’s at almost 1.400 is mind-boggling.

By any careful analysis, Thames was destined to be an afterthought in the Major Leagues at age 30. Yes, he hit .349/.451/.721 in three seasons in Korea, but you know who else hit like crazy in Korea? Byung Ho Park, who can’t find a spot on the Twins’ Major-League roster. And we didn’t even have to guess much at how Thames’ numbers would translate to the Majors because we could simply go off his track record as a .250/.296/.431 hitter with the Blue Jays and Mariners early in his career.

Obviously Thames won’t hit like this all year (in part because he won’t be facing Reds pitching all year), but much of his success is coming from plate discipline, which doesn’t disappear overnight. Anyone who says he expected Thames to be near this good is lying. His MVP-caliber start is the least foreseeable storyline in baseball so far this year.