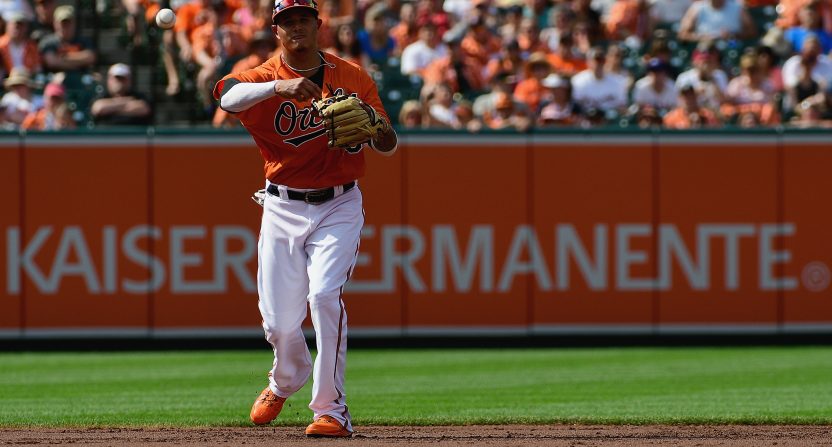 On Wednesday, Baltimore Orioles’ star Manny Machado opened some eyes by more or less saying he insists on being a shortstop for the team that signs him this upcoming offseason. Via the Baltimore Sun:

“I’m playing short,” Machado said. “That’s the position I want to play. That’s the position I know I can play and produce [at]. … I’ve been a shortstop my entire life. I’ve played third base for a couple years. I did well, and I thought I was an elite player at that position, but at the end of the day, I’ve been a shortstop my entire life. I know I can be a way better player as a shortstop than I can at third.”

Defensive metrics take a long sample to draw conclusions from, but halfway through the 2018 season, Machado has been the very worst shortstop according to virtually any meaningful metric.

Machado’s been worth -21 defensive runs saved (DRS), which is far and away the worst mark for shortstops and the second-worst for any position player (Rockies CF Charlie Blackmon is last at -21). He’s also dead-last in ultimate zone rating (UZR), and has graded out with easily the worst range rating for shortstop according to FanGraphs. Again, it’s not a huge sample, and he hadn’t played shortstop as his primary position before 2018 in the major leagues. An adjustment period was understandable for a highly difficult position, but the early returns are really, really bad.

And it’s not exactly surprising when you see his 6’3″, powerful frame. This is also how shortstops with his physical profile — Alex Rodriguez, Cal Ripken Jr. etc — usually trend: from shortstop in their early pro baseball years, to third base in the later years. The body gets bigger, and the athleticism and range take a hit. And here’s the thing: Machado had been a very good to elite third baseman every season! Shortstop is as premium as baseball positions come, but with how bad Machado has been there and how good he’s been at third base, he’s likely hurting his value quite a bit by not just playing third base.

So the thinking has been that Machado is a long term third baseman, and — unless he really makes some strides at shortstop in the second half of the season — the team that signs him in the offseason probably plans to put him back at third base in 2019 (or at least within a couple seasons). He’s still plenty valuable (3.0 fWAR) at shortstop right now because he’s crushing the ball (.308/.378/.561, 150 wRC+), but he may be peaking offensively. Machado is a terrific hitter, but these are easily his best career numbers and last year he really struggled (.259/.310/.471, 102 wRC+). And odds are that over a long term contract, he has at least a couple seasons where the offensive production isn’t great.

If he insists on playing shortstop, he could be shrinking the number of suitors and lowering the offers he does get; if a team isn’t sold on him playing shortstop and he’s dead set on the position, they probably aren’t going to offer him the $250+ million it was assumed he would get. He should be saying he’s open to playing multiple positions and doing whatever he can to help the team win. Be flexible!

This is the opposite of what you do in FA. You say “I’ll play wherever they want me to play” and absolutely nothing else. Good grief.

So, those comments were on Wednesday. And on Thursday, Machado was again surprisingly honest about his plans in free agency.

Baltimore play-by-play man Gary Thorne (you may remember him from the old ESPN days) spoke with Machado, and the slugger said it’s “very doubtful” he chooses to stay with the Orioles.

Less than 4️⃣ hours to #VoteManny!

WATCH his chat with Gary Thorne and head to https://t.co/xKN7w28GVA to send Manny to his 4th All-Star Game! pic.twitter.com/0nDIPSqAck

Thorne: “Is there any chance you stay?”

Machado: “At this point, very doubtful.”

And it may not be in the Orioles’ best interest to put so much money into signing one player, when they’re clearly a lot of good players away from contention, especially in a division that includes the Yankees and Red Sox. And they should just trade Machado for prospects before the July 31 deadline anyway (and should’ve just done that months ago).

But superagent Scott Boras can’t like his client being this honest about the free-agency intentions before we even hit the All-Star break. More teams would be interested in Machado if he’s willing to play multiple positions, and his price may be increased as a result. The bidding may also be increased if the Orioles are viewed as even a possible suitor, and he certainly made it appear that they’re not in the picture with his comments on Thursday (let’s be real: “very doubtful” is a “no.”).

Keep your leverage, Manny. There’s no good in telling the world about your free-agency intentions. Tell that to teams privately if you must, and at least *act* flexible about the positions you’re willing t0 play and teams you’re considering playing for.