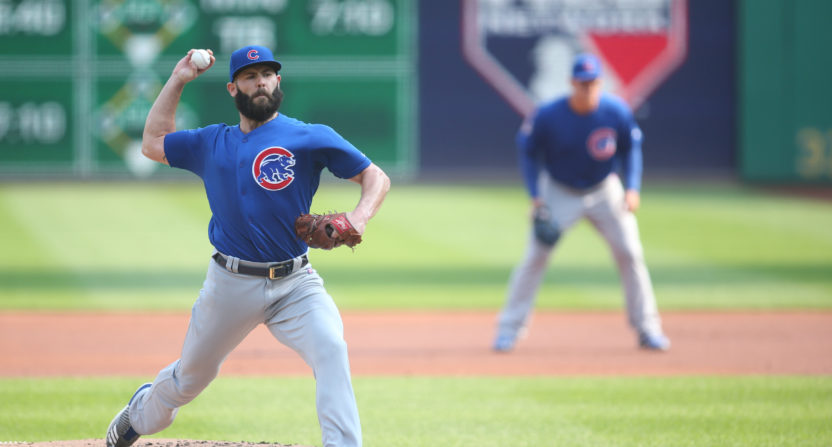 Back in early November, we made a list of Major League Baseball’s top 10 free agents, with predictions for where they would sign. Somehow, three months have passed since then, yet six of our top 10 (along with numerous other good players) remain unsigned, amid the slowest free-agent market in post-collusion history.

So now, we present to you something that would never exist in a normal winter: a months-later ranking of the top remaining free agents, along with updated predictions of where they will sign.

Just as before, Martinez, fresh off a fierce .303/.376/.690 slash line, rates as the best player available. The outfielder is one of the game’s top hitters, with a wRC+ over the past four season that ranks fifth in baseball, which should more than make up for the fact he doesn’t provide much value in the field or on the bases.

Originally, we predicted Martinez would sign with the Phillies for six years and $161 million, but with the Phillies having already signed a slugger (Carlos Santana) that fit looks far less sensible. All the rumors and reports this winter have the Red Sox as the front-runner for Martinez, so we expect them to eventually ink the outfielder — likely at a discount.

Darvish has seemed close to signing a few different times — with the Dodgers, with the Cubs, with the Brewers — but remains available nonetheless, with teams likely wary of his injury history and durability concerns, as well as his slipping numbers and disastrous World Series.

Still, Darvish is the best pitcher on the market and arguably the only guy out there who can serve as an ace or even a No. 2 in a good rotation. He’ll get paid eventually.

Hosmer’s market has not quite developed, thanks in part to his flawed resume and in part to an excess of first basemen on the market. The Indians grabbed Yonder Alonso, the Phillies inked Santana, the Mariners traded for Ryon Healy and the Red Sox re-signed Mitch Moreland, leaving Hosmer scrambling for a job. The Padres have (somewhat bizarrely) been rumored to have interest, but at this point it seems Hosmer will wind up back where he started.

Only two years ago, Arrieta was a Cy Young-winner. Now he can’t find a job, even in a league that always starves for starting pitching. Sure there are warning signs (hello, 4.16 FIP) that Arrieta’s decline over the past couple seasons will continue, but you’d still expect him to garner more attention than he has so far. This one is hard to peg, but the Brewers seem to have both desire for another splash (after signing Lorenzo Cain and trading for Christian Yelich) and a need in their rotation.

Moustakas could be the free agent most destined for a below-market deal. In a league loaded with third basemen and power-hitters, there seems to be little interest in a homer-happy slugger who plays the hot corner. His only option might be a “pillow contract” that puts him back on the market next year. The Yankees would be a fit if they can sign Moustakas without exceeding the luxury tax threshold.

Lynn posted a solid 3.43 ERA in 2017 but only a 4.82 FIP, leading to concerns that he hasn’t fully recovered from Tommy John surgery. But even if you view him as No. 4 starter instead of a No. 2, he could help a lot of teams. The Rangers have been quiet this winter, and this could be their best chance to add an arm.

If Cobb can stay healthy, he’s a formidable weapon, but that’s a big “if” for a guy who has never made 30 starts in a season. Still, the Cubs have been rumored to have interest all winter, and if they can’t land Darvish, Cobb is probably their next choice.

Holland is the most pedigreed reliever available, but he struggled brutally down the stretch last year after returning from Tommy John surgery, and he’s the oldest player on this list. It’s somewhat easy to see why a market hasn’t developed for him.

It’s tough to know what to make of an eight-year veteran who just enjoyed his first productive season at age 30. If Morrison can repeat his .516 slugging percentage, he’s a valuable slugger. If not, he’s not worth much, especially in a crowded market for first basemen.

Lucroy salvaged a highly disappointing season with a strong showing (.310/.429/.437) after a trade to Colorado. Plenty of teams could use a catcher who not long ago was an MVP candidate, not least of all a Nationals team that seems to be making little progress in trying to acquire J.T. Realmuto from the Marlins.