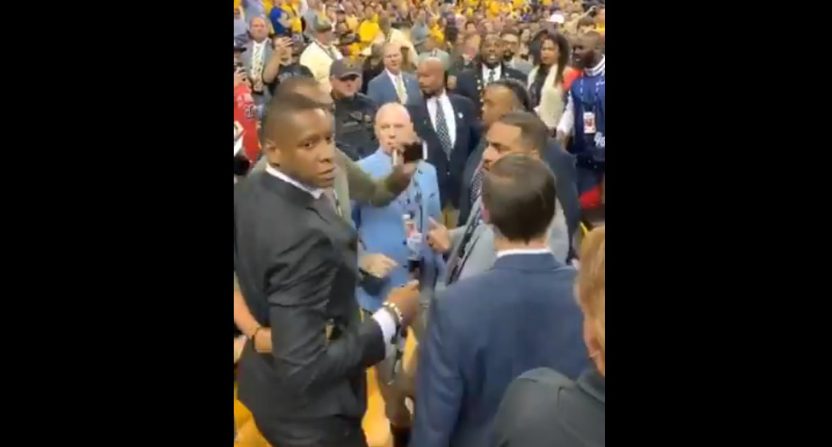 The Toronto Raptors’ championship celebration after beating the Golden State Warriors Thursday night came with quite the strange caveat; the Alameda County Sheriff’s Office claiming a “Raptors’ executive” (which appears to be president of basketball operations Masai Ujiri) “pushed and struck” a deputy who wouldn’t let him on the court for the title celebration. NBC Bay Area’s Kristofer Noceda and Gonzo Rojas first reported this Thursday night, with that report indicating sources told them Ujiri was the executive in question, and Noceda tweeted a video from immediately after the alleged incident that seems to show the aftermath of the claimed push:

#BREAKING: Sheriff's deputy reportedly pushed and struck in the face by a man believed to be a Toronto Raptors executive after Game 6 of the #NBAFinals at Oracle Arena, @ACSOSheriffs says. https://t.co/fobdK9iWEq pic.twitter.com/a4X0IysY5Z

Video from another angle from someone who was sitting courtside makes it seem even more clear it’s Ujiri being accused of this:

The GM of the raptors just pushed a sheriff in here who was fully dressed in tactical gear. I never seen such an insane bold move like that. The cop backed down and was low key shook. I mean push like fuck you mama push. Wow!!!!

Not that it matters but it does. Cop was white. Acting extra extra and the GM is a black guy. I’m still in shock. Crazy 🤯

My bad. He’s the president of the Raptors. 😳 he might be my new hero pic.twitter.com/PU0RuBAZu4

As per the county sheriff’s office’s statement, Jon Schultz of The San Francisco Chronicle has that here:

Sgt. Ray Kelly, a spokesman for the sheriff’s office, would not confirm the identity of the Raptors executive when reached by The Chronicle.

After the Raptors’ victory, the executive was denied access to the court by a deputy because he didn’t have the proper credential, Kelly said.

“(The deputy) did not know who the man was and asked for the credential, and that’s when he tried to push past our deputy, and our deputy pushed him back, and there was another push that kind of moved up and struck our deputy in the face,” Kelly said. “At that point, several bystanders intervened and the executive did ultimately get back onto the court without displaying credentials.”

“It’s not like we were going to chase him down,” Kelly said. “He had a right to be there, but he didn’t follow the credential policy.”

No arrest was made, but the Sheriff’s department and Oakland Police are conducting a follow-up investigation, talking to witnesses and reviewing video. The case will be submitted to the Alameda County District Attorney’s Office for a review of charges, Kelly said.

There’s a whole lot that’s weird about this, and that starts with the “didn’t have the proper credential.” Especially as there’s a video from seemingly just before this of Ujiri holding his credential as he runs into the arena:

Masai Ujiri is *holding* his credential in his hand as he walks out of the tunnel into the arena after the Raptors won the title…the scuffle that occurred with the cop could get ugly for that cop unless Masai dropped it. pic.twitter.com/xiCWfxnINz

And a freeze-frame of the video seems to show he still had it:

his credential is in his right hand pic.twitter.com/dMrzhIN2DN

Update: And now there’s a witness disputing the sheriff’s office’s account, via the AP’s Rob Gillies:

Greg Wiener, a season ticket holder who was standing next to the officer, told The Associated Press the police are not telling the truth and are trying to cover up for what the officer did. He said Masai Ujiri never struck the officer in the face or asked for a credential.

But even without that, the president of basketball operations for one of the teams in the NBA Finals should pretty obviously have the credential needed to get on the floor after that. And beyond that, the deputy claiming to not know who the man was is also interesting, as Ujiri’s a pretty prominent figure. (And you have to wonder if the deputy in question would be similarly rigid about trying to check credentials for Warriors’ GM Bob Myers or head coach Steve Kerr.) At any rate, someone certainly failed in providing a way for the Raptors’ president of basketball operations to get where he should be after their title win.

It’s also notable that there doesn’t yet seem to be video evidence of the shoves in question, and so for now at least, it’s mostly the sheriff’s department’s word that they were severe enough to be worth noting. And we’ll see if their investigation actually leads to anything. It should perhaps also include why Ujiri didn’t have “the proper credential,” and why a deputy they assigned to guard the court had no idea who the Raptors’ president of basketball operations was.

It’s maybe also worth noting that past incidents like this have also seen some bold claims from law enforcement that wound up leading to lots of pundits’ hot takes, but no actual criminal consequences in the end. For example, the Houston police got mad about Michael Bennett trying to get on the field after the February 2017 Super Bowl and indicted him on charges of “injury to the elderly” (because of a 66-year-old paraplegic woman on the security detail) over a year later, but the district attorney’s office dismissed that case earlier this year, saying “After looking at all the evidence and applying the law, a crime could not be proven beyond a reasonable doubt.” Something similar certainly could happen here.

Interestingly enough, this was only one of two Ujiri stories from the evening. Shortly after the game ended, ESPN’s Adrian Wojnarowski reported that the Washington Wizards plan to reach out to Ujiri with a massive offer:

The Washington Wizards are preparing to offer Toronto Raptors president of basketball operations Masai Ujiri a deal that could approach $10 million annually and deliver him the opportunity for ownership equity, league sources tell ESPN.

Wizards owner Ted Leonsis is expected to reach out to Toronto ownership soon to request formal permission to meet with Ujiri and offer a staggering financial package that would include running the Wizards’ basketball operations and, perhaps, taking on a larger leadership role in the Monumental Sports and Entertainment company that oversees the Wizards and NHL’s Capitals, league sources said.

Whether that leads to an actual formal offer or to Ujiri actually leaving Toronto is anyone’s guess. Raptors’ owners Maple Leaf Sports and Entertainment have massively deep pockets of their own, and that they could perhaps offer a similar leadership role in their multi-sport company (which also owns the NHL’s Toronto Maple Leafs, MLS’ Toronto FC, the CFL’s Toronto Argonauts and more). But that certainly is a big offer from Washington, and it’s one that makes it clear that unlike the sheriff’s deputy in question, they’re very well aware of who Ujiri is.