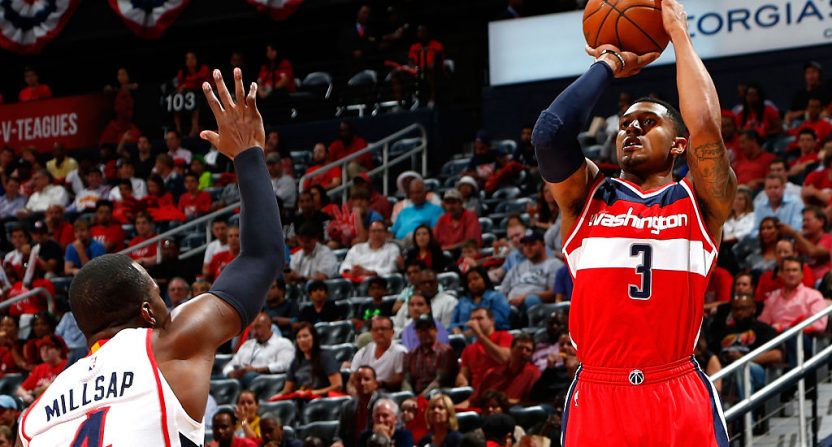 Bradley Beal is having a terrific season for the red-hot Washington Wizards, with a scoring average of 22.0 points per game and a 39.0 three-point percentage over 318 attempts. The 23-year-old is second among Eastern Conference shooting guards in scoring and Player Efficiency Rating, and has made 24 more three-pointers than any shooting guard in the conference.

However, Beal was left off the Eastern Conference All-Star team, and it appears to have disappointed him enough to turn down an invitation to the three-point contest.

Beal told CSN Mid-Atlanic that if he’s going to be a part of All-Star weekend, he wants to be an All-Star:

“I feel like if I’m going to be part of the weekend, I want to be an All-Star,” said Beal who is averaging a career-high 22 points and shooting 39% from three-point range. His teammate Otto Porter shoots an NBA-high 46.3%.

The University of Florida product added that the decision wasn’t easy, because he did — at least before the All-Star snub — want to participate in the three-point contest:

“It wasn’t easy turning down. I will say that because I did want to do it. I want to be able to earn everything,” Beal said.

And Beal has participated in the three-point contest before. He finished as the runner-up to Marco Belinelli in 2014.

It’s disappointing for fans that Beal and his smooth stroke won’t participate in the three-point contest, but he’s understandably upset about not being a part of the weekend’s main event, when he absolutely deserves to be.

Beal was also unhappy after Thursday night’s Lakers-Wizards game about a large turnout of Lakers fans making it “feel like [the Wizards] were on the road” during a game at the Verizon Center, which ended up being the Wizards’ 16th consecutive home victory.

Beal is having the best season of his five-year NBA career, and he may now be even more motivated to take things to another level the rest of the season.