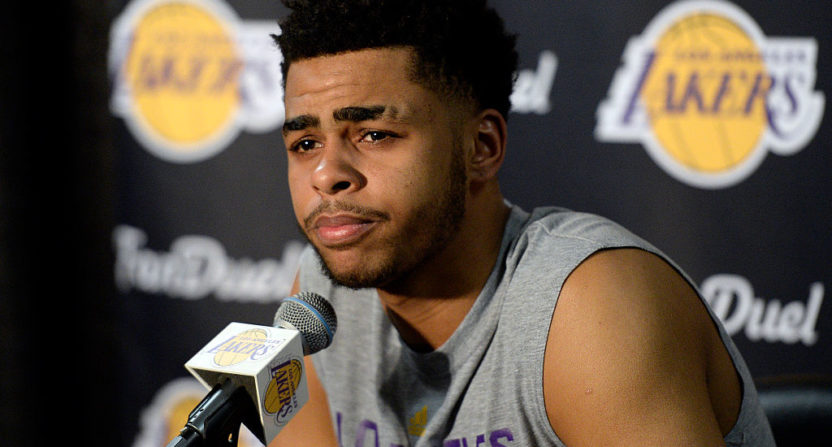 The Lakers came away with the No. 2 overall pick in the 2017 NBA Draft through Tuesday night’s lottery, and that puts them in position to select UCLA product and southern California native Lonzo Ball, a 6’6″ point guard who garnered All-American honors (and all sorts of wild headlines thanks to his dad) as a freshman. But the Lakers already have a young point guard in D’Angelo Russell, who they drafted with the No. 2 pick two years ago.

While Russell made improvements during his second year in the league, many people see Ball as the better option to become the face of the Lakers and make the franchise relevant again. Ball’s dad, Lavar Ball, already stated Lonzo would play only for the Lakers anyway — not that that necessarily means much.

Russell has the versatility to play shooting guard should Los Angeles choose to move him off-the-ball alongside Ball, but the other option is to trade Russell considering he is a skilled, 21-year-old point guard with plenty of potential.

Immediately after the lottery results came in Tuesday, multiple teams are already evaluating trade packages for Russell, according to Sports Illustrated. Russell is an attractive piece for any team looking for a point guard not only because of his youth and potential, but also because of his cheap contract. He has two years remaining on his rookie deal, which makes him way cheaper than any starter in free agency. And if Russell were to turn into a bust, whoever gets him could cut their losses and let him loose in two years without ever putting down big money.

From the Lakers’ perspective, if they move Russell and draft Ball, they could possibly add some good frontcourt pieces to their promising young core that includes guard Jordan Clarkson and forwards Julius Randle and Brandon Ingram. The Lakers also have the No. 28 pick, which in normal years might not mean much but could be important with this year’s deep draft class.

There’s no question the Lakers are the biggest winner of the lottery. Had they fallen out of the top three, they would have lost their pick to the 76ers. Instead they have plenty of great options to work with.