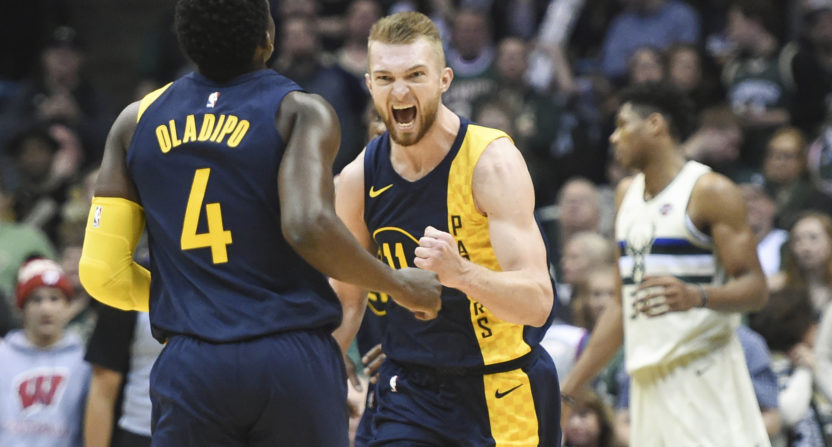 The Cavs were in Los Angeles yesterday to take on the Lakers. Last night and today, social media was aflutter with people admiring LeBron James’ highlight-reel passing display:

In the wake of the Cavs’ trade deadline bonanza, it was pretty much an assumption that they’d figure it out, or at least figure it out enough to secure the #3 seed in the East, then look to ride pending free agent LeBron to one last serious playoff challenge. That hasn’t really happened, though; Cleveland is 4-6 over their last 10 games, and their season-long point differential is currently -0.1. That’s not great!

Last night’s loss means the Cavs are actually now fourth in the Eastern Conference; if you want to get real crazy, they’re only 3 games up on the current 8th seed, Milwaukee. And now, thanks to a win in Boston last night, the Pacers are in third. The Pacers! The same Pacers that were crushed this past offseason for the trade that sent Paul George to Oklahoma City now have a real shot at a top-3 seed in the East.

This might come as a surprise to you, considering the Cavs, Bucks, 76ers, and even the Wizards all get discussed more often than the Pacers. And to a degree, that’s understandable; there’s nothing that sexy about Indiana, although Victor Oladipo is basically a superstar player now, as Zach Lowe pointed out:

It has been fun listening to everyone struggle to explain how the Indiana Pacers are nine games over .500. They’re mediocre on defense. They’re not deep. Other than Oladipo, only Domantas Sabonis has wildly outperformed expectations. (Darren Collison was in the midst of a splendid season before undergoing knee surgery, but his numbers are only a tick higher than in the past couple of seasons.)

And then, Occam’s razor: Oladipo isn’t just having a feel-good season. He has been a superstar. That’s it. The Pacers outscore opponents by about seven points per 100 possessions with Oladipo on the floor; that number sinks below its inverse when he sits. The Pacers are 0-6 without Oladipo, and 37-22 — a 51-win pace — when he’s available.

The Pacers are in the middle of a crucial run of games; after playing Boston last night, they play at Philadelphia tomorrow night, before hosting Toronto and then heading to Washington to finish up the week. It’s entirely possibly they lose all three of those games and get shuffled back into the middle of the East. But even winning just one more, ensuring a 2-2 stretch, would be a great result, and at this point it’s tough to bet against them. Indiana’s point differential is +1.6 for the year; their success isn’t a mirage. Nate McMillan should be getting serious coach of the year consideration.

Oh, and if you want to check them out (and you should, they’re fun) you’re out of luck: they don’t have any more national television games scheduled this year. They’re essentially the NBA’s invisible good team. Which is a shame, because they’re one of the best stories in the league.