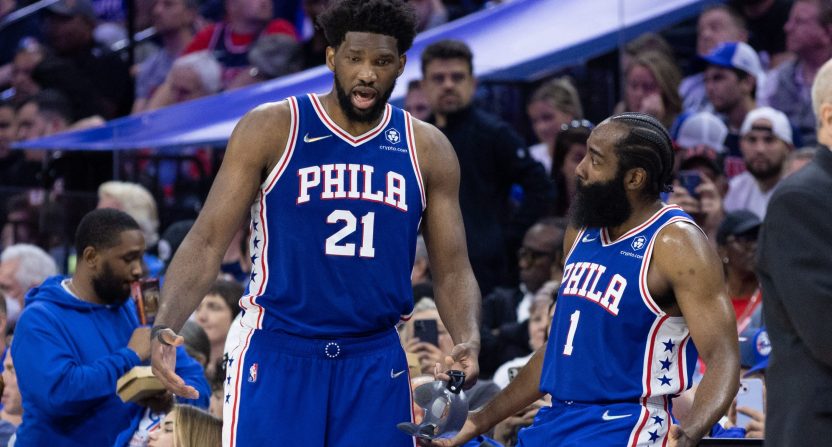 The Philadelphia 76ers did everything they could to stop it from happening again. In the 2020-21 season, the Sixers collapsed amid weird and invisible circumstances in no small part due to the mental block of Joel Embiid’s co-star Ben Simmons. They squandered Embiid’s MVP-caliber season. After getting knocked out of the playoffs by the Miami Heat this season, the Sixers are having a painful deja vu.

The whole idea of acquiring James Harden at the trade deadline was to avoid the same fate as last year. The Sixers traded a significant package — including important role players Seth Curry and Andre Drummond — to the Nets in order to pair Embiid with a high-scoring second option. Harden, for whatever his flaws, would never refuse to shoot in the most important game of the season. Right? Right??

The Sixers lost Game 6 to a more organized, disciplined, and cohesive Heat team. They have yet again managed to fumble away a winnable second-round series in dramatic fashion. Nothing quite seemed to fit together for the Sixers, even though this team is great on paper. They will face tough decisions this offseason as they desperately try to figure out how to win with their dominant center.

At the center of their failure is Harden, who represented championship hope when he was acquired. While Harden had looked older and slower for much of the past two seasons, he had still shown flashes of the greatness that made him a league MVP. He never lost his elite playmaking ability. At one point during the 2020-21 season with the Nets, Harden reprised his MVP form.

It was reasonable to believe that Harden, still only 32, would fully recover from the hamstring injury that had hampered him. He could form an unstoppable duo with Embiid, running highly effective pick-and-rolls around three shooters. These two players, in a mutual search for a co-star who could make their life easier, could create easy looks for each other and rampage to the championship.

Even with Curry and Drummond shipped to Brooklyn, the supporting cast looked championship-caliber. They have winning players who can do it on both ends. Tyrese Maxey and Tobias Harris are perfect third and fourth options, two floor-spacers who can create their own offense. Maxey in particular is a ceiling-raiser, a player who meshes with stars, gets out in transition, and runs bench units. Danny Green is the type of player every championship team needs. Georges Niang and Shake Milton give them flexibility. Matisse Thybulle is a generational defender.

At times in the regular season, the Sixers looked legit. Harden and Embiid looked great together. Maxey feasted as opponents played more attention to the stars. In his first four games as a Sixer, Harden averaged over 25 points on good efficiency, adding 12 assists. They went 4-0 in that stretch. After that, Harden rarely found a way to score efficiently, averaging just 21 points on a 48 percent effective field goal percentage in 21 regular-season games with the Sixers.

Maybe Harden would turn it on in the playoffs. He’d get more aggressive and find ways to score even without the same burst that he once had. With Embiid bulldozing in the paint and Maxey attacking from the perimeter, the Sixers could win games without Harden scoring 30 every time out.

They grinded their way past a feisty Toronto Raptors team in the first round. Then they went back and forth with the Heat, a great team with copious perimeter defenders and the flexibility to play any defensive strategy. Harden focused on playmaking, and after falling behind 2-0 as Embiid sat out, they managed to take two games.

Embiid, however, was dealing with two significant injuries. Somehow, he found a way to play through a torn ligament in his right thumb that will require surgery this summer, as well as an orbital fracture. I do not want to imagine the pain one must feel while playing 40-plus physical minutes in an NBA playoff game with a broken face.

The idea of having Harden is that he could take pressure off of Embiid if this scenario occurred, in which Embiid was hampered or compromised. But in Game 6, with Philly down 3-2 and facing elimination, Harden disappeared. He attempted two shots in the entire second half, missing both. He finished with 11 points, nine assists, and four turnovers. It was a completely terrible performance.

Stephen A. Smith on James Harden and Doc Rivers after the Philadelphia 76ers were eliminated by the Miami Heat. 🏀🔥 pic.twitter.com/yL3YVij1dp

It’s also confusing. Unlike last year’s playoffs, Harden didn’t look obviously affected by an injury. He just didn’t do anything on offense. He got off the ball early in possessions and then chilled in the corner. He tried to attack a couple of times in the second half, and it went disastrously. What is this?

Harden has never seemed like a player who would lose his effectiveness after his athleticism had been sapped. He isn’t a high-flier like Russell Westbrook; he’s a methodical, versatile scorer who subsists on stepback threes and Eurosteps to the rim. He puts defenders on his back in the pick-and-roll and finishes with clever floaters. For years when he was in Houston, defenses had no answer for all of the ways that he could score, and the ways that he could use his passing to counter opposing strategies.

His hamstring could still be impacting him. He doesn’t have the same burst or explosiveness that he used to have, which allowed him to quickly get into the paint and get past defenses at the point of attack. It’s surprising that he hasn’t developed new ways to get himself consistent offense, perhaps by operating more in the midrange and relying on floaters.

One of the anticipated problems after Harden arrived in Philly was that his long-held heliocentric tendencies would cause problems. While he hasn’t monopolized the offense, he has maintained his aversion to doing much of anything when he doesn’t have the ball. He doesn’t cut or set productive screens. It seemed at one point that he would buy into that approach. That went away in the playoffs.

Harden’s disinterest in participating in Game 6 became more and more apparent as the game went on, and seemed to reverberate to the rest of the team. They lost focus on defense, failing to put bodies in front of Jimmy Butler (which is something that Embiid specifically pointed out after the game). Harden rarely provided help defense and fell asleep on cutters multiple times. Especially after Green tore his ACL three minutes into the game, they lacked impactful perimeter defenders to throw at Butler and Tyler Herro. Thybulle’s lack of offense rendered him nearly unplayable.

Maxey and Harden actively feuded. They could be seen yelling at each other during plays, and there’s a clip of them in an argument on the bench during a timeout.

Tyrese Maxey was FRUSTRATED with Harden during this timeout 😳 pic.twitter.com/0MIDmD1Kn8

Doc Rivers has taken a good share of criticism, but it’s unclear what buttons he could have pressed that would have gotten this team to try harder. He doesn’t have much control over Harden’s lack of activity. Was Harden protesting something by not doing anything on offense? Is the hamstring causing this much of a problem?

The Sixers still might have been able to survive if Embiid had been at his best. He took 24 shots in Game 6 and only made seven of them. Throughout the series, he rarely posted up, even with the 6’4” PJ Tucker guarding him. He struggled to take advantage of the Heat’s various double-teams. His jumper wasn’t hitting, and he couldn’t create advantages for his teammates despite the attention that he garners. I must emphasize that I am not criticizing Embiid; he was playing with a broken face. It’s true, though, that the dip in his level hurt the team.

Philly has structural flaws on defense that have caused them problems in the past. They stick with drop coverage through thick and thin, and the reality in 2022 is that playing that coverage in the playoffs is really hard. You have to have multiple impactful perimeter defenders and an organized helping scheme to prevent star players (like Butler) from getting jumpers. Your big man has to be mobile enough to challenge on the perimeter, in addition to being a dominant rim protector.

The Milwaukee Bucks and Phoenix Suns can do it because they have a great defensive scheme with players who can execute it. The Sixers played a fairly simple scheme that can be exploited by smart playoff teams. The Heat were able to consistently get looks against Embiid and finish through him at the rim. With smaller players like Harden, Maxey, and Milton (plus the slow Niang), the Sixers don’t have the personnel to support this scheme.

Daryl Morey must wrestle with all of these questions in the offseason. Harden has a player option and said that he wants to be back in Philly next season. The Sixers will be hard-pressed to find a better secondary star, although the NBA is unpredictable and anything can happen.

Philly has to avoid giving Harden a five-year max extension, which would make him one of the highest-paid players in the league through his age-37 season. That contract would be a disaster, and potentially a franchise-killer. Letting Harden play on an expiring contract, or even finding a way to sign him for only one or two years, would be a better choice. It remains to be seen whether Harden would be okay with that.

Above all, the Sixers have to find a way to get Embiid some help. They have the outline of a good supporting cast. They’ll need some internal improvement (please, Matisse, make some three-pointers.) Getting a big wing who can defend apex stars would be huge. Maybe Harden will work hard this offseason to rehab from his hamstring injury and get back to full strength.

Questions remain, and only some of them will be answered this offseason. The goal, as ever, will be to prevent a playoff collapse. And it’d be nice if they find a way to get their second-best player to take some shots in the big games.