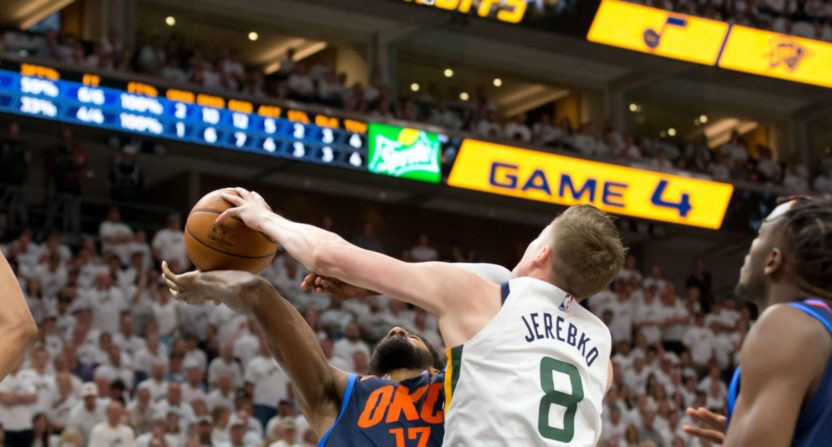 When the Thunder traded Victor Oladipo and Domantas Sabonis to the Pacers for one year of Paul George, it was a widely-celebrated move. The thinking was that it gave Oklahoma City a superstar player for at least a year, perhaps gave them an inside line on signing George long-term, and helped show Russell Westbrook how committed the franchise was to assembling a contending team around him.

And if George walked, a likely scenario given his expressed interest in playing for the Lakers? (Interest that was reciprocated, as we found out when the Lakers were fined $500,000 for tampering.) Well, then the Thunder still came out ahead by shedding the Oladipo contract. What could go wrong?

That sense of no-lose optimism felt like a very long time ago last night in Salt Lake City. As Joe Ingles rained threes from all over the court (including a few right in PG’s face), Ricky Rubio played well despite Russell Westbrook’s stated determination to stop him, and the Jazz took a 3-1 first round series lead via a 113-96 win that wasn’t even that close. It’s become pretty clear that this year has been an all-around failure for the Thunder.

Things have looked bad for a while thanks to Victor Oladipo’s ascendance in Indiana. That alone made the rental for George look bad, and while there are plenty of arguments to be made that even the Pacers didn’t expect Oladipo to be this kind of player, that doesn’t change the situation. Sabonis has also looked much improved, and has been an important rotation player for Indiana all season as they’ve exceeded expectations to the point of battling the Cavs to a 2-2 draw so far.

If you want to say that Oladipo and Sabonis wouldn’t have been as good for the Thunder as they have been in Indiana, that might be true. But there’s an obvious counter to that argument: Why?

Because if it is due to Russell Westbrook’s need to be the most important player at all times, whether or not it benefits his team overall, that’s not a defense of the team. That’s the opposite. Russ isn’t going anywhere, either; he signed his monster extension last year. It’s clearly his team. Carmelo Anthony will also be back next year, assuming he opts in for his $27 million, which he will, because he’s not getting $27 million anywhere else. Steven Adams is also locked in for big money for the next few years.

The Thunder are going to look pretty similar next season, with one important variable: Paul George.

George can elect to become an unrestricted free agent this offseason by forgoing his own player option, and it seems likely that he’ll do so. George has been great for the Thunder this year. With Kawhi out and LeBron, uh, conserving energy on defense all season, George might be the best two-way wing player in the league right now. (Yes, Durant has been great too, it’s tough to quantify all of this.) He’s a star, and he’s managed to co-exist fairly peacefully with Westbrook so far. But it’s clearly not working on the court, despite Paul George doing Paul George things.

So why would he want to come back?

On the surface, sure, the Thunder are closer to contention than the Lakers would be, or the Clippers. But the other way to look at it is that this is their ceiling. Sure, they lost Andre Roberson with an injury, and with him their chance at being a legitimately stifling defensive team. That’s not nothing. But they’re getting housed by the Jazz! A very good Jazz team, sure, but it’s a big leap from “clearly worse than the Jazz in a series” to “contending for championships.”

And playing with Westbrook can’t be that fun. Kevin Durant left over it. James Harden and Victor Oladipo turned into stars after leaving. There’s an argument for Paul George being a better player than Russell Westbrook, season-long triple double aside. And it’s not that much of a stretch, either; George is clearly the better shooter, clearly the better defender, and clearly a more versatile offensive player. He’s also 2.5 years younger.

Think about all of the places LeBron has been rumored to go. Philadelphia, Houston, etc. He can only go one place. Paul George can also go anywhere. Imagine him in Philadelphia, defending along with Simmons, Covington, and Embiid? Or in Houston, with open looks all over? Or even being the centerpiece of his own team in Los Angeles, as has long been rumored. Maybe even with LeBron.

It’s tough to see how Paul George can look at his options and decide that coming back to try to carry the Thunder without getting any credit is what’s best for him. If he goes, the Thunder still have Westbrook, and Adams, and one year of Carmelo. But that’s clearly not enough.