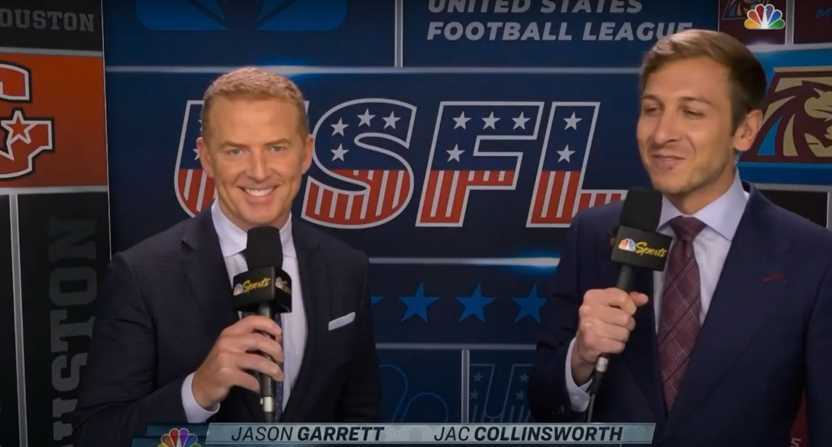 Garrett’s name came up in various coaching searches the last few years, including with the San Diego Chargers and the Duke Blue Devils. However, after nothing materialized, he made the move to the broadcasting booth and it appears to have paid off as he’ll now be part of the coveted Notre Dame announcing duo, replacing Drew Brees in the commentary spot.

Garrett was a hot commodity this offseason when the commentator carousel opened up a lot of new spots for NBC and other networks. While some are still warming up to the idea of trusting him after years of frustrating watching him coach the Cowboys and Giants to mostly subpar seasons, it looks like NBC is going all-in on Garrett.

Still, the news that Garrett and Collinsworth would be the new Notre Dame booth was met with some interesting reactions from the college football world. Most of them were…not good.

As a Notre Dame fan, this may be worse than any loss I’ve experienced. Other than the Bush Push. OOF https://t.co/ee81CfjbNH

Maybe the mainstream media really IS against catholics https://t.co/1XApcpBKRk

Personally I would have gone with the 2022 @RedeemerRadio Viva Bocce Champions as the broadcast team for @NDonNBC.@46Sports on play by play.@golic as analyst@JosephKloska14 as sideline reporter@NDmom interviewing (you guessed it) ND moms.

Collinsworth is a talented guy, but those are some big shoes to fill.

Decisions are made every day. This is one of them. https://t.co/d3vfZFELJd

This could go either really well or really terrible.

Wish they kept Tirico in the booth for another year to help bolster Garrett. But we'll see how it goes. ☘️ https://t.co/17wxrtgFxI

Garrett and Collinsworth will have their work cut out for them to convince college football fans of their value. They’ll get their first chance when the Irish host Marshall on September 10, a week after they travel to Columbus to take on Ohio State.