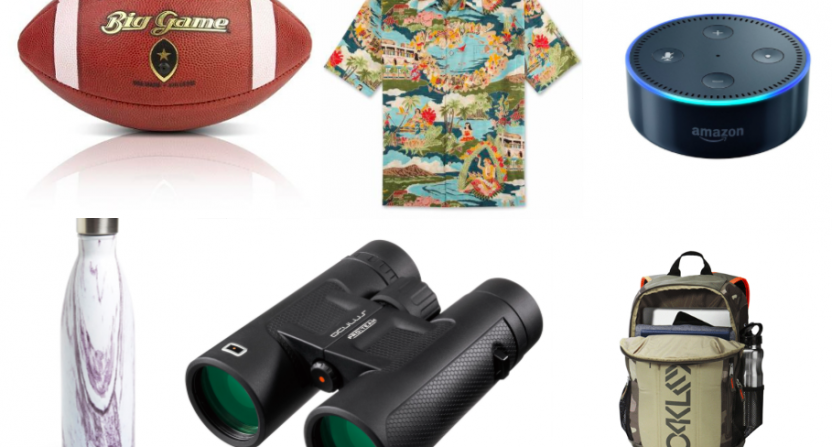 College Bowl season is here and that means a couple of things: One SEC team probably just missed the playoff, draft prospects will be declaring daily their intention to skip their bowls to prep for the draft, and players will be receiving sweet swag for playing in said bowl games.

Without further ado, here is the officially unofficial ranking of the swag given out to players at the various bowls. These are ranked from worst to first.

Until someone can clarify what a gift suite is and that it is not as bad as this simple Wikipedia entry, any game where all the players get is a gift suite will be ranked low. That’s mostly because when I read gift suite I imagine the players are all receiving the gift baskets Michael Scott gave to Dunder Mifflin’s former clients.

The Las Vegas Bowl checks in at 37 because the Las Vegas item TBD is too vague, nobody needs a beanie in Vegas, and what player wants a dad hat! OR A FANNY PACK!

Just a bunch of bland stuff for a bland game that I will probably not watch.

The players definitely have backpacks and footballs, so this comes down to the mystery gift suite and a beach towel. Pass.

Ah our first of many fossil watches. Really though, get ready. Fossil watches range in price, from $90ish to $200+. I would like to think the watches given away at the New Orleans Bowl and Music City Bowl will be on the lower end of the spectrum, hence the low ranking.

At least these players also get a hat?

The Bluetooth speaker is cool. The water bottle is probably pointless for these players since their schools supply them. The same can be said about the backpack and sunglasses. Do any of them really need a pen? I can keep going.

Another Fossil watch! Another gift suite! The duffel bag is a nice touch and the players at Eastern Michigan could probably use a beanie. A big game football? Why are these bowls giving football players footballs? They probably have plenty.

A quick google search on RFID-blocking Ridge wallets has led me to believe these are metal wallets. That is… strange. Who wants a metal wallet? ALSO WHAT FOOTBALL PLAYER NEEDS ANOTHER FOOTBALL!

I was tempted to put this much lower because the gifts are very meh. Then I realized the game is in the Bahamas and these players essentially get a free trip to the Bahamas in December. That is a major gift in itself.

Beanies are useful in Idaho this time of year, Oakley backpacks can be trendy and cool, and a hydroflask sounds neat. This is a fine swag bag that could be much lower, but definitely not higher.

The Birmingham Bowl is only ahead of the Idaho Potato Bowl because these players get to choose between a backpack and sunglasses. Choices are good.

I nearly put this much lower because it’s similar to the Holiday Bowl swag bag (#32), but then decided it fit here because at least these players got a different type of watch.

The Sun Bowl is only ahead of the Independence Bowl because they got more swag in addition to the gift suite, Timely watch, and pointless football.

This is the first time a bowl is ranked in a certain spot because of the prestigious nature of the bowl. A gift suite, watch, hat, socks, and cufflinks is a pretty bad swag bag. However, the Sugar Bowl ranks 23rd because it’s the Sugar Bowl and I refuse to believe the majority of players on Texas and Georgia are going home without more.

A Bluetooth speaker helmet is unique and different from the majority of other football themed gifts, so I thought this deserved a mid-tier ranking.

I don’t really know what a subwoofer is, but Xzibit used to put a bunch in every car on Pimp My Ride, so it must be cool.

Now we are getting somewhere. The gift suite phrase is so vague that the smallest addition of ‘electronics’ spices it up enough to be ranked in the top-20. Throw an ‘aloha’ shirt in and sign me up. Oh and these players get a free trip to Hawaii, which is pretty great (for Louisiana Tech, not Hawaii since they are basically playing a home game).

Our first gift card! This should be much lower because players don’t need more athletic gear or a new backpack or a belt buckle, but this is adequately placed because of the gift card. After all, it gives them plenty of options of things to buy.

That is… a lot of swag. Based on the sheer volume of swag given to the Cal and TCU players and the fact that this is considered a semi-solid bowl, the Cheez-It Bowl found its way into the top 20.

A backpack with a power bank and USB port is extremely helpful in college. I’m going to assume ‘Beats Budst’ is a typo and the players get Beats earbuds. A Fire Kindle with built-in Alexa is useful these days, especially on long flights. This is a solid swag bag.

I would think the shopping trip to a Belk department store comes with a gift card. If that’s the case, 16 is a good fit. If it’s not and the players have to pay for everything, this should be 20 spots lower.

We are officially high enough in the rankings for the first College Football Playoff Bowl appearance. The Cotton Bowl is a couple spots behind the Orange Bowl for one reason: it wouldn’t disclose its gifts. That is lame and annoying.

I don’t see a point in an Amazon Echo, but it’s a nice touch. The Maui Jim sunglasses will also make excellent Father’s Day gifts for these player’s dads in addition to the Fossil watch.

It’s gotten to the point in the rankings where I’m having trouble putting together thoughts on these rankings. Redbox Bowl merchandise is silly, but the Roku and headphones are a nice touch and very forward-thinking.

Let me be clear about something, this swag bag should probably be in the bottom five, but it’s instead #12 for one reason… it’s the freaking Rose Bowl. It’s the Granddaddy of them all.

Torneau watches are really nice and the personal bobblehead is a sweet touch. After all, if any college sold a personalized bobblehead of one of its players, that school would get in a ton of trouble I would imagine.

If the Liberty Bowl featured, I don’t know, Stanford and Boston College, this would be in the bottom five. However, because it’s a matchup between Missouri and Oklahoma State and all the players get a trip to a Bass Pro Shop, it’s #10. One gift couldn’t be more perfect for the players and the fans of the schools involved.

The Cotton Bowl came in at #15 because it didn’t disclose the gifts and one could argue the title game should be tied with it. However, it’s not because it’s the title game! It’s hard to imagine the gifts given away at the Championship game are not amazing. I simply didn’t put this higher because we don’t know what the gifts are. After all, the game is at Levi Stadium in California so maybe all the players get is just a pair of Levis.

Here we go with the more meaty gift cards. $175 to BEST BUY! Imagine all the Xbox related merch these players can buy to help them play Fortnite better.

$175 to Best Buy! A personalized Fathead! ANOTHER FOOTBALL!

Based on monetary value, the Military Bowl should be 8th because $100 is less than the $125 given in Best Buy gift cards to Outback Bowl participants. Then again, the Military Bowl is handing out $100 Amex Gift Cards, which is basically cash. It’s $100 not to Best Buy or any other store in particular, it’s $100 to use anywhere Cincinnati and Virginia Tech players want.

One would have to imagine a PS4 gift package includes an actual PS4. If that’s the case, #7 is perfect. If it’s not, drop this to #17 and move everything else up one.

Let’s be honest, a $300 Visa gift card is basically $300 in cash. That is absurd. On top of that, the Florida and Michigan players also get a Powerstation, Amazon Echo Dot speaker, watch, and a football. This is just getting out of hand. The $300 gift card is incredibly nice.

Amazon sells so many things these days that any amount of money on a gift card to Amazon is basically cash. Members of the Washington State and Iowa State football teams are getting a watch, mini helmet, team photo, and basically $425 in cash, and that’s the best outcome of any of the bowls here.