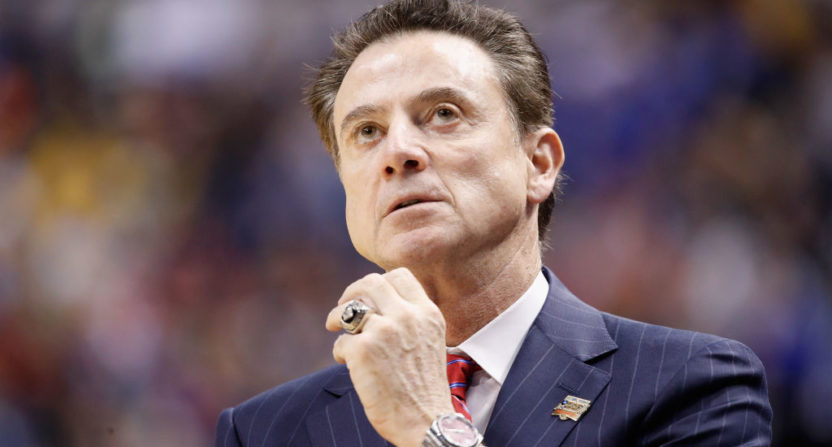 Guess who has a new book coming out? Rick Pitino. “Pitino: My Story,” co-written by Seth Kaufman, is supposedly a tell-all memoir. The Hall of Fame basketball coach will give his side of the story regarding the recruiting scandal that led to his firing last September at the University of Louisville.

This account is being published by Diversion Books and is scheduled for release on Sept. 4. So far, no juicy tidbits have been leaked. But for entertainment purposes only, let’s have a little fun and (recklessly) speculate on the book’s revelations.

*Masterminded an elaborate revenge-fueled plot to ruin Papa John – Pitino and Papa John Schnatter are the best of enemies.. Rick hates Papa. Papa hates Rick. So, the following is not improbable: a Pitino acquaintance Jedi mind-tricked Schnatter into saying the n-word during that infamous conference call and then subsequently leaked the news to Forbes magazine. This led to the downfall of America’s most famous Pizza Guy. Crazy conspiracy theory? Maybe… Maybe not. If true, that will go down as the ultimate gangster move.

*Moved to Miami to reinvent himself as a fake doctor/shady pharmacist and part-time DJ –Pitino may never coach again – at least not in the NCAA or NBA. He’s too radioactive for college and too old for the pros. So, what can a rich 65-year-old native New Yorker do with his extra time? Start a new career in Florida, of course. If you know anything about Miami, you know you can’t go anywhere without running into a doctor who is not a doctor, a questionable pharmacy or some dude who is an Uber driver by day but swears he’s going to be the next DJ Khaled.

*Attempted to bribe NCAA president Mark Emmert in exchange for having referee John Higgins work Kentucky’s next NCAA tournament game – We’re not sure how high John Calipari ranks on Pitino’s official list of enemies, but at best they’re frenemies. Calipari went 8-2 in the rivalry during Pitino’s stint at the University of Louisville. Calipari beat the Cardinals in the Final Four en route to the 2012 national championship. Then, Pitino coached the Cardinals to 2013 title (now vacated) and is the only coach to guide two different schools to national championships. Would Pitino try to bother Calipari one last time by getting Higgins to ref a Kentucky game? The last time that happened, Wildcat fans were so displeased by Higgins’ calls in the 2017 Elite Eight loss to North Carolina, Higgins received death threats.

*Is fielding reality TV offers – Would it surprise you to learn that Pitino has a couple shows he’s mulling over? First possibility: he would coach a high school basketball for one season. This team would be in a rural area of a sparsely populated state (like Alaska, Wyoming or Montana). The team would have to be one of the worst in the region. Let’s see if Pitino can work his magic out in the middle of nowhere. The second reality TV show concept: Pitino would review job applications and hire coach for six non-Division I schools (Division II, Division III, NAIA and junior college colleges are eligible). The coach who has the best season would receive a $100,000 bonus.

* Has texted LeBron every single day –This makes sense. You can imagine Pitino blowing up The King’s phone with “U up?” texts. Or when LeBron was in Miami earlier this summer, Pitino probably wrote: “Can I send You an Uber to Come Over?” Or perhaps a general text of “I Can’t Stop Thinking About You.” Pitino is trying to woo LeBron so he can coach him in the future. LeBron automatically makes any coach look good: Paul Silas, Mike Brown, Erik Spoelstra, That Dude Who Now Coaches in the  EuroLeague, Tyronn Lue. Now LeBron is going to be coached by Luke Walton? Pitino thinks he’s a much better option but he’s got to persuade LeBron first. So, he texts LeBron with cheesy lines like: “Are your legs tired? Because you’ve been running through my mind all day!?”

*Sent an audition tape to be the next Bond – Man, if people are going to be apoplectic over the possibility that Idris Elba could be the next James Bond, wait until they hear about this. Pitino doesn’t even have an English accent. Instead, he hired to voice coach to help him. It didn’t quite work, but hey, it’s Hollywood. Did you hear Jennifer Lawrence as a Russian spy in Red Sparrow? Pitino just needs to avoid saying doctor (he pronounces “doctuh), water (wawtuh), or dog (“dawg”). Pitino thinks he’s an ideal fit to play a mature 007 who comes out of retirement to save the world. Stay tuned….

*Attempted to steal the Cardinal mascot outfit so he could clandestinely coach Louisville last season – Pitino has been a head coach since he was 26 years old. Coaches are often addicted to coaching. It’s virtually impossible for many to give up the lifestyle. Pitino lost his job at the worst possible time  – right on the eve of the start of the 2017-18 basketball season. That’s like a starving man being taken to a restaurant only to be refused service. So, Pitino came up with a plan. The identity of “Louie,” the Louisville Cardinal Bird mascot, is kept under wraps. The university has never publicly revealed who the person is underneath the costume. However, Pitino probably knows. He could’ve easily slipped the student $1,000 in beer money for access to the suit. During the game, dressed as the Cardinal Bird, Pitino would have whispered instructions to his former players: “Match-up zone!” “1-3-1 half-court trap!”

*Thinking Get Out was a documentary, attempted to kidnap Donovan Mitchell.  Pitino may not be able to rehabilitate his image. But maybe he can become a totally different person. Even when The Rick was winning championships, he was never viewed as particularly warm or cuddly. Donovan Mitchell, whom Pitino coached at Louisville, is not only a rising star in the NBA but he’s one of its most likable personalities. He paid for a stranger’s iPone repair. He surprised a cancer patient at the Cheesecake Factory. Pitino originally thought about copying similar random acts of kindness. Instead, he attempted to take it one step further by BEING Mitchell. All he needed was to find the lady with the sunken place tea cup and he could take over Mitchell’s body. Alas, he was profoundly disappointed to find out Get Out was merely a work of fiction.