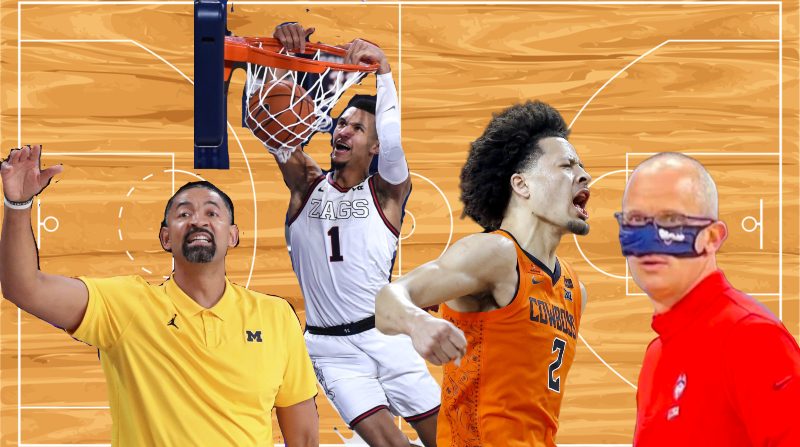 So, you’ve decided to check out the NCAA Tournament. Congratulations! Welcome to what promises to be the strangest Big Dance ever. Virginia is STILL the defending national champion (?). There’s no Kentucky or Duke, but welcome back Rick Pitino and Patrick Ewing (!). And there’s the distinct possibility that a team could participate with just five healthy players (?!?).

Bizarro World basketball. Take heart in knowing that this probably will be one of the last times we have a sports postseason quite like this. If the Biden Administration delivers on its lofty promise of having enough coronavirus vaccines for all adults by the end of May, life could return to some semblance of normal by this summer.

Let us rejoice and be thankful. Last season’s cancellation was the ultimate in March Sadness. This wasn’t going to happen for the second year in a row. Bracketville is open for business, and we mean bu$ine$$.

One Shining Moment? Puh-lease. Cash rules everything around me. (“Get the money. Dolla dolla bill y’all.”). The NCAA lost $600 million due to the lack of the 2020 tournament. Forget the love of amateur sports. There’s moolah to be made. The NCAA oligarchy will play this tournament even if it’s under 3-on-3 rules with a Nerf ball in Mark Emmert’s backyard.

March Madness marches on in this made-for-TV event, with the entire tournament taking place in Indiana. No state embraces basketball more. But there is a cruel irony. No Hoosiers. Indiana University (12-15) was so bad that it fired its coach, paying Archie Miller $10 million to go away.

There will be fans. The NCAA says it will allow up to 25% capacity with physical distancing. But most of us will be watching from our home or work. And with more Americans now working from home due to the pandemic, it will be easier than ever to catch all the action. You no longer need to hide from your boss in the bathroom to sweat out the final minutes of a No. 12 vs. No. 5-seed upset that could give you an edge in the office pool.

Ok everyone. We have an extra day to figure out what channel @truTV is! pic.twitter.com/iwAWOMFVxP

You get the feeling that the 1976 Indiana team is kind of like the 1972 Miami Dolphins, actively rooting against teams and popping bottles when they finally lose. Gonzaga is the latest to try for perfection. The Bulldogs could become the first team to finish a season unblemished since Indiana went 32-0 in ‘76.

Holy Dan Dickau. Gonzaga has gone from adorable mid-major, to national power, to the No.1 overall seed and betting favorite. The Bulldogs lead the nation in scoring (92.1), field-goal percentage (55.09), and scoring margin (+23.0). Their closest call was an 87-82 decision over West Virginia in December.

The Bulldogs are so good that Corey Kispert (19.2 ppg), the West Coast Conference Player of the Year, isn’t their biggest star. Jalen Suggs is the best NBA prospect that program has ever had, and some have even compared him to Derrick Rose.

Scott Drew exists in a weird space. He is apparently disliked by his peers, most notably Rick Barnes. He was once compared to a TV evangelist. And Forbes called him one of the most overpaid coaches in the sport in 2013. That criticism has largely vanished.

Baylor basketball was once the epicenter of one of the worst scandals in sports, which included a player killing a teammate. That led to the coaching change that brought in Drew. Since his arrival in 2003, the Bears have been to four Sweet 16s and two Elite Eights. Now they might be on the verge of their first Final Four since 1950.

Among the No. 1 seeds, Michigan enjoyed the most surprising season. The Wolverines were picked to finish sixth in the unofficial Big Ten media poll. Instead, the Wolverines won the league’s regular-season title for the first time in seven years. They might have won the conference tournament too if not for a foot injury to forward Isaiah Livers.

Check out seven-footer Hunter Dickinson, the league’s Freshman of the Year. He helped the Wolverines be one of the most balanced team in the nation, ranking No. 6 in offensive efficiency and No. 7 in defensive efficiency.

Who is that masked man? Ayo Dosunmu might have the coolest game and coolest look. His black protective gear makes you wonder if he stepped out of a comic book.

"I feel like a superhero with a black mask on"

With a broken nose, Ayo Dosunmu saves the day for the #Illini scoring 19 points in his first game back, including the final five. This is no comic book, it's Ayo's story, history. pic.twitter.com/NWb2RN2s31

Dosunmu got the accessory after a broken nose and concussion forced him to miss three games. Even his father loves the new look.

The runner-up Big Ten Player of the Year is second in the conference in scoring, second in assists and minutes (35.1) while shooting 48.8 percent. Illinois has a great 1-2 punch with Dosunmu and center Kofi Cockburn (17.6), the conference’s leading rebounder (9.6). Cockburn is a massive human being at 7-1, 285 pounds. Still, coach Brad Underwood said that he’s “the most abused player in college basketball. It’s not even close.” Like Michigan, Illinois is great at both ends of the floor (No. 7 in offensive efficiency and No. 5 in defensive efficiency)

Six things we love about this tournament

6. Michigan State vs. UCLA – Finally we have a play-in game worth watching. Mid-majors should never be forced to participate in the First Four. Instead, have the big boys battle it out, and you don’t get much bigger than these tradition-rich programs.

If Michigan State vs. UCLA isn’t the greatest First Four matchup of all time, I don’t know what is.

5. Oklahoma State’s Cade Cunningham – Good Lord, this guy is awesome. Watching someone at his size (6-foot-8) with his playmaking ability is sheer fun. The probable No. 1 overall pick of the 2021 NBA Draft is must-see TV.

4. Ohio State coach Chris Holtmann’s mother – Win or lose, moms are always there for us. And sometimes they’ll even sprinkle in some words of wisdom.

My Mom’s text after our loss last Saturday. Even Moms have tips when you drop a couple.

3. Utah State’s Marco Anthony – Dude chose his uniform number 44 because of his love for the Wendy’s 4 for $4 meal deal. It’s almost too delicious to believe.

I’d say your favorite combo is your new jersey number, but then everybody would be 44. https://t.co/ihCvUD6zJu

It also makes you wonder….

"I wear the number 5 because I love my five-dollar footlong, now available at your participating Subway." https://t.co/b12qXTdqgT

2. Houston coach Kelvin Sampson back at Assembly Hall – Sampson must be laughing uncontrollably inside. In 2008, he was fired mid-season by Indiana due to NCAA recruiting violations over impermissible phone calls. Now, he has returned to Bloomington with a team good enough to win it all. Bwahaha

Kelvin Sampson back at IU’s Assembly Hall on Friday. pic.twitter.com/h3JW0jiUkc

Georgia Tech and THIS GUY just won the ACC tournament.

Winthrop upset of Villanova is visible from space.

A Final Four of teams seeking their first NCAA championship