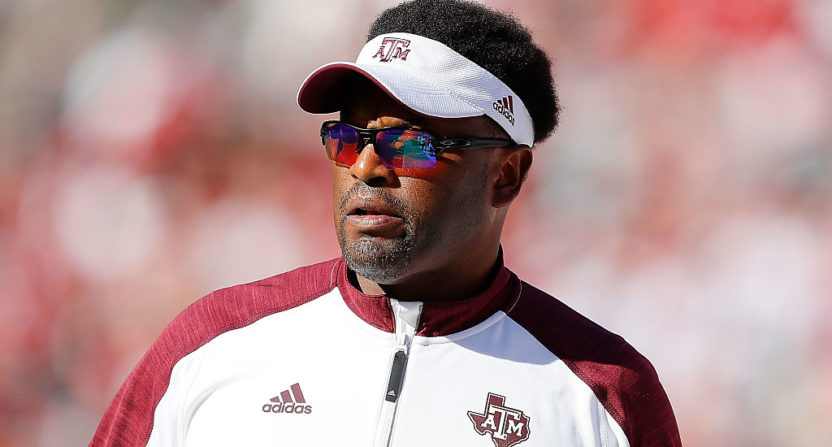 Kevin Sumlin was once rumored for just about every hot job opening in college, and even a few in the NFL. Now, he might be looking at unemployment.

That’s according to this surprisingly unequivocal report from Brent Zwerneman of the Houston Chronicle:

Texas A&M coach Kevin Sumlin will be fired following the Aggies’ regular-season finale at LSU on Saturday night, multiple people with knowledge of the situation said.

Sumlin is expected to be dismissed in the day or days following the A&M game against the Tigers. The Aggies are a double-digit underdog to the Tigers, and an A&M victory wouldn’t save his job at this point, the sources said.

It’s a sharp fall for Sumlin, who went 11-2 in his first season with the Aggies, and hasn’t been worse than 8-5 since. Texas A&M currently sits 7-4, meaning the 8-5 plateau was within reach, but if the report is to be believed, boosters must have decided to aim higher.

There’s been obvious discontent with Sumlin’s performance; after their opening week loss this year, for example, a member of the board of regents went on a lengthy Facebook diatribe against Sumlin. However, if the report is accurate and a win against LSU isn’t going to be enough, there’s a chance that the Aggies finish the year 9-4 and remove their coach anyway; that hasn’t worked out for schools like Nebraska, for example. Consistently winning 8-9 games isn’t necessarily easy to improve upon.

For his part, Sumlin denied knowledge of any such decision:

A resolute Sumlin on Tuesday at his weekly press conference said that he expects to be A&M’s coach next season.

“Why wouldn’t I?” he said in response to a question from the Chronicle about his future.

Told that the Chronicle had learned he wouldn’t be back next season, Sumlin responded, “I haven’t heard that.”

It’s tough for Sumlin, but not that tough; his buyout will likely fall near $10 million, thanks to the contract extension he signed in 2013 after one season, an extension the AD at the time recently said he didn’t approve of.

With Florida open, Butch Jones gone from Tennessee, Sumlin reportedly on his way out at Texas A&M, the Ole Miss job being open if undesirable, and potential openings at Arkansas and maybe even LSU, the SEC coaching carousel is going to be a wild ride.