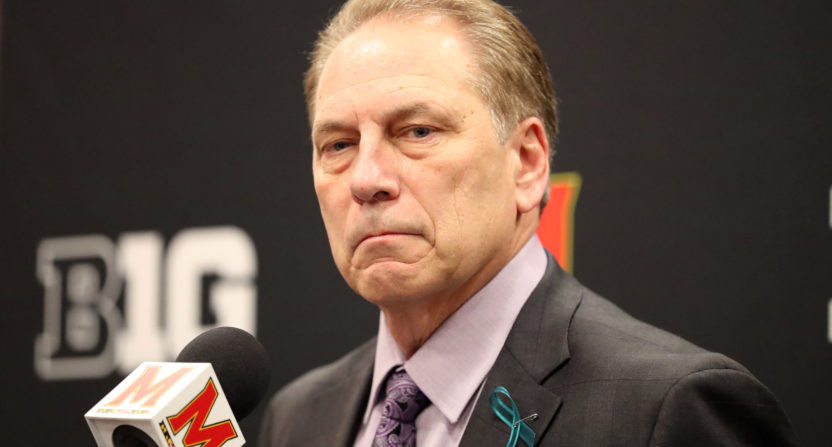 Whenever there’s a college scandal like the Jerry Sandusky one at Penn State or the sexual assault cases at Baylor, the call for justice and recompense is loud and often comes from all across the country. Predictably, there is pushback from locals and those associated with the university who claim that “outsiders” should tend their own flocks while assuring everyone that they’re going to solve the problem once and for all. What that response usually fails to realize is that, quite frankly, no one believes you. Why should we expect the people in power who oversaw the scandal to make the right decisions when it came to cleaning it up?

Very few people would disagree that Michigan State University needs to clean house and start fresh with new leadership and new blood in the wake of the horrific Larry Nassar scandal. We now know that the longtime MSU professor and employee abused north of 250 women or girls as a Michigan State and USA Gymnastics doctor. While he was sentenced to up to 175 years in prison last week, the aftershocks from what happened and didn’t happen at Michigan State are still rippling. MSU President Lou Anna K. Simon resigned last week, followed soon after by AD Mark Hollis.

One group that has handled itself well throughout the scandal and the fallout is the student body. While Tom Izzo was offering up sheepish denials, MSU basketball player Cassius Winston and football player David Beedle offered up strong responses about what has to happen now.

This is Cassius Winston when asked if players are seeking out information or isolating themselves and focusing on basketball.

If there's anything to be encouraged by in this whole mess, this might be it. pic.twitter.com/AfgYztw5pv

Meanwhile, a boulder on the MSU campus known simply as “The Rock” was painted with the names of 150 victims of Nassar’s as students protesting what had happened and how the school was attempting to shield itself from the fallout.

An iconic rock on Michigan State's campus is covered with the names of Larry Nassar's victims https://t.co/vzXS5bq4Pb pic.twitter.com/GBCKpLlSqn

Wednesday, the Michigan State Board of Trustees voted unanimously to name former Michigan Gov. John Engler as interim president. The move was expected, but has been met with lots of pushback over Engler’s reputation as a polarizing politician with a history of hardball tactics in government. In other words, just the kind of person you bring in when you need to steer a state and government investigation where you want it to go. Couple Engler’s arrival with the fact that Attorney General Bill Schuette is leading the investigation into MSU and things get even murkier. Schuette is currently running for governor and has been endorsed publicly by Engler, which is not a surprise considering Schuette ran Michigan’s agriculture department during Engler’s first term.

Oh, and there’s also the fact that Mark Dantonio wrote the forward to Schuette’s book, “Big Lessons from a Small Town.”

MSU students are not taking all of this lying down. After MSU trustees voted to appoint Engler at Wednesday’s meeting, MSU senior Connor Berd climbed onto the table and told board members just how the student body felt about the decision.

“I’d like to speak. This is not the democratic process. This meeting was put in a room specifically so there wouldn’t be a lot of people out here. This is something that we do not believe as students, as members of this university and community, that reflects what we believe as Michigan State students. I just want this to be known. I just want this to be heard. We hope that you as a board of trustees make better decisions going forward and allow us in on the process.”

A Michigan State board of trustees meeting was interrupted by students venting frustration about the board's unanimous decision to pick John Engler as interim president.

He wasn’t alone in his dissent. Ashley Fuente, president of the council of graduate students and a doctoral candidate in curriculum, instruction, and teacher education, also let the board hear it.

“I’ve tried to maintain my faith that MSU, despite its shortcomings and mistakes, is a place that can help pave a path forward in ending a pervasive rape culture and divisive climate,” she said. “I was even moved by your statements last Friday and hopeful you’d make good on your promises to listen to victims, students, faculty, staff and all other stakeholders in this institution.

“Disappointed does not feel like a strong enough word to use upon learning of your hasty appointment of ex-Gov. John Engler. Even on a temporary basis, the damage that can be caused by appointing a politician as an interim president on an already polarized campus is catastrophic,” Fuente said. “Ex-Gov. Engler’s past legislation and policies in the past are in direct conflict with our core value of our inclusion.”

Faculty liaison Laura McCabe read a statement echoing student frustrations, saying that the faculty “learned of their apparent decision to select Gov. Engler through public media.” She announced that the Faculty Senate would call for a vote of no confidence in the board, which, if successful, meant the entire board would be asked to resign immediately.

Still, the board soldiered on. In thanking Engler and former governor James Blanchard, who is also coming aboard in a senior role, trustee Joel Ferguson said the board was taking swift action.

“When something’s on fire, you really don’t call the fire department three days later. You want to move right away.”

Afterward, College Democrats of Michigan State president Dan Martel had a response to that notion.

“You did not call the fire department for 20 years. I suggest new leadership is needed.”

Try as they might to snake their way out of this, the leaders at Michigan State will have to answer to the students they’ve sworn to and failed to protect. One way or another.

2 thoughts on “Michigan State is trying to sweep scandal under rug, but its students and student-athletes won’t let them”