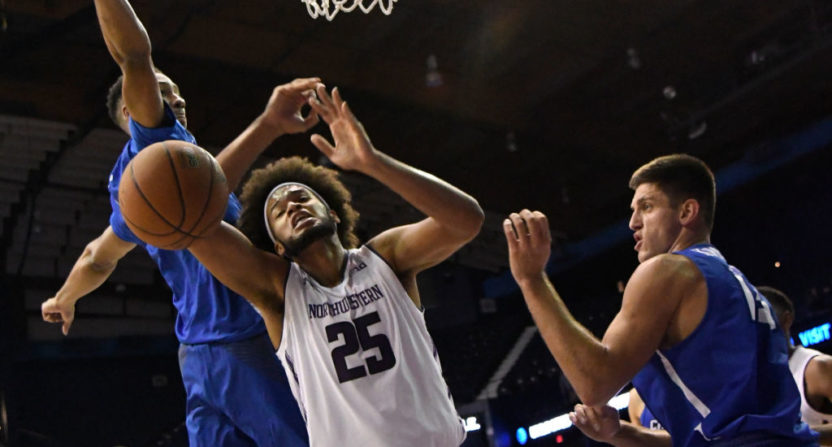 After last year’s feel-good breakthrough to the NCAA Tournament, Northwestern is back to playing Northwestern basketball. The Wildcats dropped an ugly, 52-51 heartbreaker to Georgia Tech in the Big Ten/ACC Challenge when Tadric Jackson’s buzzer-beater dropped in on Tuesday, nine days after getting embarrassed by Texas Tech.

Along with Arizona, Northwestern is the most disappointing team in college basketball so far this season. The Wildcats began the season ranked No. 19 but quickly fell out of the Top 25. They’ve stumbled to a 4-3 start and placed themselves in a precarious position regarding NCAA Tournament hopes only seven games in.

Losing a close game on the road to an expected bubble team like Georgia Tech is pretty much what you’d expect from, well, another expected bubble team. Just because Northwestern has been worse than last year and far worse than this year’s preseason expectations, doesn’t mean the Wildcats should throw away their 2018 NCAA Tournament hopes already. But they’ll need a big turnaround and an impressive run in the Big Ten to reach the Big Dance once again.

The Wildcats have already squandered three opportunities for quality non-conference wins. They’re 0-3 against the KenPom top 75, and their best win is against La Salle, who’s likely not even a top five team in the Atlantic 10, on a neutral site. That will probably remain their best non-conference win, as their only remaining opportunity to best it is a tough road game at Oklahoma. Point guards have had field days against Northwestern this season, and Oklahoma has an electric one in freshman Trae Young, who’s averaging 28.2 points and 8.6 assists through five games.

Ken Pomeroy’s metrics predict Northwestern, ranked No. 50, will finish the regular season 17-14 with a 9-9 Big Ten record. That would put an at-large Northwestern team at 15 losses entering the NCAA tournament. Only one team has made the at-large field with 15 or more losses, and that was last year’s Vanderbilt team, which coincidentally was Northwestern’s first round opponent. Although the Commodores had 15 losses, they also played the toughest schedule, according to the RPI, and won four games against the RPI top 25. With an average non-conference schedule and a struggling Big Ten, Northwestern’s strength of schedule may not even rank in the top 50.

Regarding Pomeroy’s predictions, his numbers should be taken with a grain of salt this early in the season, but in this case, that makes things worse for Northwestern. Pomeroy’s algorithm incorporates data from past seasons early in the year because there’s not enough data to this point in 2017-18. The fact that Northwestern finished No. 38 last year and began at No. 18 this year suggests their ranking will continue to drop as the season produces more data if they don’t improve.

Even though the Wildcats have four starters from last year’s tournament team, they haven’t shown any reason to suggest this poor start is a fluke. They couldn’t buy a bucket for most of the game against Georgia Tech, and Texas Tech made them look like a high school team. Although their defense looked improved for portions of the Georgia Tech loss, miscommunication between veteran wings Vic Law and Aaron Falzon on the game’s final play opened up an easy drive to the rim.

Lost in the recency of those two defeats, Northwestern nearly lost to Loyola Maryland and St. Peter’s, teams not even expected to be factors in the Patriot League and MAAC, respectively.

Senior point guard Bryant McIntosh has been fine offensively but a minus-player defensively. He’s averaging a career-high 35.9 minutes, including 39 on Tuesday. The minutes load could be playing a role in his struggles defending opposing guards, and it will definitely be a factor by the end of the year if he keeps this workload. Most likely, that will be the case because Northwestern does not have a backup point guard.

Aside from Tuesday’s goose egg, Scottie Lindsey has been a go-to scorer, but he’s also been the team’s second-worst player in defensive plus/minus, leaving Law and senior forward Gavin Skelly as the only players consistently making an impact on both ends of the floor.

So things aren’t looking so good for the Wildcats. In other words, they may need some more full-court miracles to return to the tournament. It’s too early in the season to make grand conclusions, but the Wildcats are trending down. And considering McIntosh’s lack of a backup, this program is a long shot to reach the NCAA Tournament in 2019. Despite a top 25 recruiting class coming in, Northwestern loses three starters including McIntosh, leaving their point guard situation as a complete mystery with no apparent solution. Three-star recruit Jordan Lathon will likely start as a freshman. (Of course, McIntosh himself was a three-star recruit out of high school, too.)

Ultimately, Northwestern got to experience a NCAA Tournament, and that was something many people thought may never happen. But without some major developments, Wildcats fans may have to wait a bit for their next appearance.