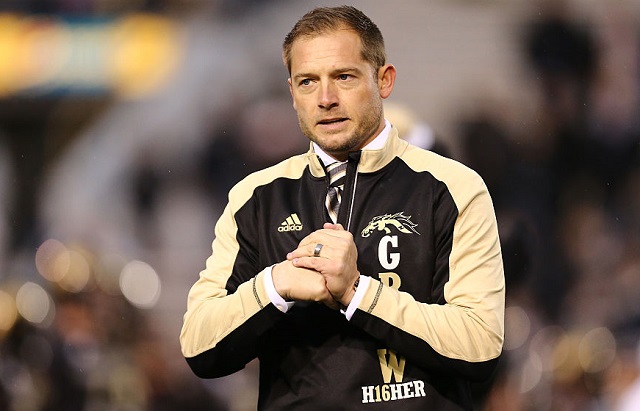 Coach P.J. Fleck led the Western Michigan Broncos to an undefeated 13-0 record in 2016. The undefeated season earned Fleck a lot of praise and his team a spot in the Cotton Bowl against the Wisconsin Badgers. It also spurred expectations that Fleck would likely be moving on to a bigger program after the season.

However, with the college football coaching carousel slowing down, it appears Western Michigan is on the verge of rewarding Fleck with a new contract for the Broncos’ terrific season, according to The Detroit News.

The details are still being ironed out, but the contract as a whole is close to being finalized. It would potentially bump Fleck’s base salary higher than the current $800,000 he’s being paid, which would increase his standing as the highest-paid coach in the Mid-American Conference.

“Coach Fleck and Western Michigan have continued contract negotiations to remain at WMU throughout the season,” athletic director Kathy Beauregard told The Detroit News on Thursday night. “He has committed 100 percent to his student-athletes throughout this undefeated MAC championship season. He will continue to make that his No. 1 priority as we prepare for the Cotton Bowl.”

This would be the second extension Fleck agreed to with Western Michigan after just four seasons. Right now, his contract runs through 2020, but this new deal would extend it past that by multiple years.

With Herman headed to UT… if I'm PJ Fleck I take a long, hard look at Houston (if they call). Cupboard far from bare. Will win immediately

While it’s not surprising to see Western Michigan try and extend their hugely successful head coach, it is surprising to see Fleck lock himself into the job for at least another year, especially with so many enticing openings in college football available. However, most of those filled up quickly, making it increasingly likely that Fleck would stay in Kalamazoo.

Fleck was attached to the Oregon job after Mark Helfrich was fired, but he insisted on coaching Western Michigan in the Cotton Bowl. Did doing the right thing and sticking with his team throughout their season end up costing Fleck a chance at a move up to a Power 5 program?

Western Michigan coach PJ Fleck did not receive a formal interview with the Oregon Ducks today, per source. Door closed there.

Either Purdue doesn't have its man; or that man is PJ Fleck, honoring his commitment to his current team and keeping it quiet until Friday.

Despite Fleck apparently having several appealing jobs to choose from, none of those options ended up developing for him. Purdue hired Jeff Brohm from Western Kentucky. LSU retained interim coach Ed Orgeron (and reportedly preferred Jimbo Fisher and Tom Herman before him). Oregon ended up choosing Willie Taggart from South Florida.

That left Houston as the most appealing job left on the market, but Alabama offensive coordinator Lane Kiffin was reportedly the favorite for the job. But in a surprising development Friday morning, Houston promoted Major Applewhite from the current staff. Applewhite had been the offensive coordinator on Herman’s staff with the Cougars for the past two seasons.

THIS JUST IN: Houston offensive coordinator Major Applewhite has been named head coach of the Cougars. pic.twitter.com/ZodfH3dyW2

According to the report of Applewhite’s hiring by the Houston Chronicle‘s Joseph Duarte, Fleck wasn’t one of the candidates being considered for the position. That could certainly have fueled extension talks between Fleck and Western Michigan, though wealthy donors have been working on a generous package to retain Fleck for quite some time.

We’ll probably never know if Fleck would have jumped to another job had the opportunity presented itself. What’s clearer is that he did the right thing morally by staying with Western Michigan through the Cotton Bowl.  Most coaches will leave their team before their bowl game to take a new job. Two very recent examples: Herman left for the University of Texas and Taggart bolted for Oregon before their former teams finished their seasons. But it doesn’t look like Fleck wanted to abandon his team.

Here's the full answer on the Cotton Bowl from P.J. Fleck. It's terrific. pic.twitter.com/QBpUSpp7EW

The thing is the way college football is going, Fleck might have hurt his standing with some schools by doing what virtually every coach should do in a similar situation and at least say he was committed to staying on for his current team’s bowl game. Especially when going to the Cotton Bowl is a huge deal for a program like Western Michigan. But at the same time, any school looking for a new football coach should want a potential hire to do the morally correct thing like that. If only that’s how athletic directors and coaches played the game in big-time college athletics.