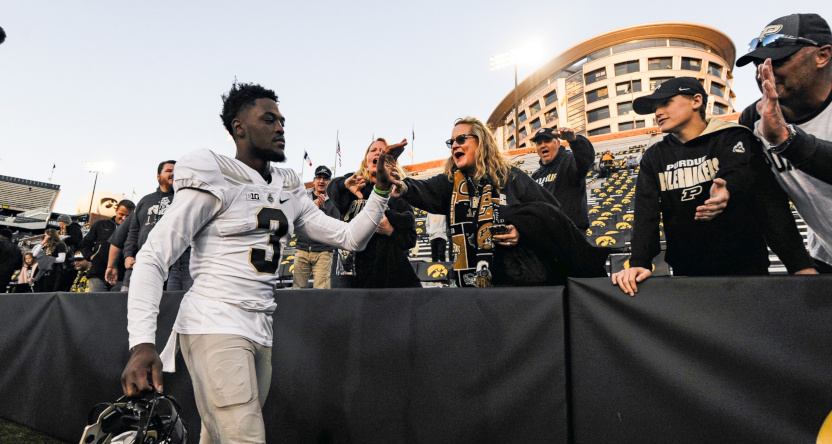 The Purdue Boilermakers added to their incredible history of upsets of top-2 teams Saturday with a 24-7 road win over the No. 2 Iowa Hawkeyes, and they pulled off their first road win against a ranked team in almost two decades along the way. Purdue’s victory here added to some remarkable stats for them, as Matt Brown of The Athletic laid out on Twitter:

Most wins against AP top 2 while unranked:

Brown went on to add that Purdue has 15 wins against the AP top 5 when unranked, while the next-closest teams (USC and Illinois) each have 11. So that’s a remarkable collection of stats about how much giant-killing the Boilermakers have done over the years, including a home win against No. 2 Ohio State in 2018. But a lot of that came a long time ago, especially for road wins; their last road win against a top-2 team was in 1974 against Notre Dame, and this was their first road win over a ranked team of any sort since Oct. 18, 2003 (when they, then ranked No. 13, beat No. 14 Wisconsin 26-23). That was the longest active drought of road wins against ranked teams in the Power 5.

This did add to Purdue’s recent and overall success against Iowa, though. The Boilermakers lead that all-time series 49-39-3, and they’ve won four out of their last five clashes with the Hawkeyes, including the last two. That timeline coincides with Jeff Brohm’s time as Purdue head coach; he’s now 23-27 there overall, but his teams have been deadly against Iowa.

Like many of the Boilermakers’ recent wins against the Hawkeyes, one big key to this was Purdue’s passing offense. Iowa has built an excellent run defense, but teams have been able to pass on them at times, and Purdue’s combination of high-volume, high-efficiency short passes with occasional shots downfield worked out well here. Quarterback Aidan O’Connell completed 30 of 40 passing attempts for 375 yards and two touchdowns (he’d add another touchdown rushing), while receiver David Bell (seen at top after the game) made 11 catches for 240 yards and a touchdown. No other Purdue receiver had more than 48 receiving yards. But the Hawkeyes couldn’t stop Bell, and that led to their downfall here.

The Purdue defense also did a great job of shutting down Iowa, especially with forcing takeaways. Quarterback Spencer Petras had 17 completions on 32 attempts for 195 yards, but threw four interceptions and no touchdowns. For the Boilermakers, Cam Allen had two picks, while Kieren Douglas and Dedrick Mackey each had one. For Iowa, running back Tyler Goodson had a decent day, picking up 68 yards on 12 carries (a 5.7 yards per carry average). But Purdue eventually got far enough out ahead that the Hawkeyes wound up throwing more, and that led to more interceptions. (There also were some notable kicking blunders on both sides.)

Next up for Purdue is a home game against the Wisconsin Badgers. Iowa has a bye before facing the Badgers the following week.