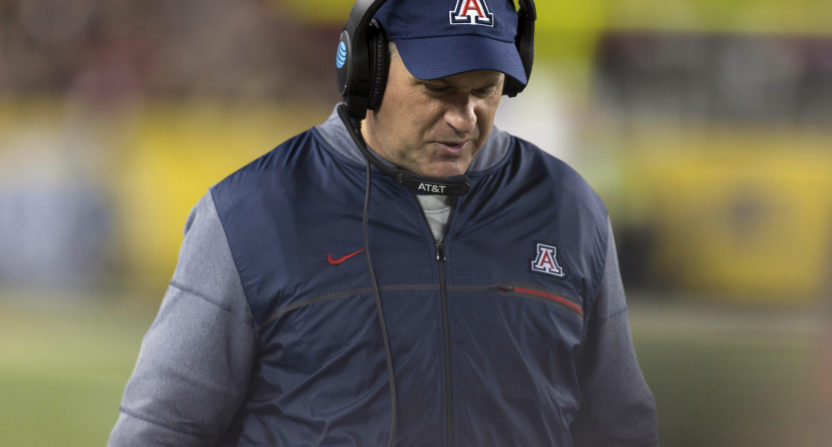 Just when it seemed as though college football’s coaching carousel came to a close for the season, the conveyor got back in motion late Tuesday night. Arizona pulled the plug on the Rich Rodriguez era of Wildcat football, but it wasn’t on-the-field struggles and a loss in a bowl game to Purdue that was his ultimate undoing in Tucson.

Instead, Arizona became concerned about allegations made against the head coach related to an extramarital affair and accusations of sexual harassment by a former staff member.

It's official. Rich Rod out as head coach of Arizona football. per @AZATHLETICS pic.twitter.com/BccZDFjVdN

Rodriguez admitted to having an extramarital relationship, but suggested a number of other allegations made against him in a possible lawsuit are erroneous. Whatever the truth may or may not be, Rodriguez became the second head coach of a major college football program to be fired in the wake of revelations about extramarital affair issues in less than a year, joining Ole Miss head coach Hugh Freeze who was canned last summer before the start of the new college football season.

The firings of Rodriguez and Freeze could have been delayed and executed for football purposes, but both Arizona and Ole Miss decided to draw the line at unsettling positions related to sexual misconduct while on the job. That’s a hard line to draw, and one that is becoming more and more well-defined in the world of sports, entertainment, government, and beyond.

Though Rodriguez and Freeze deny some of the allegations made against them, both have been found guilty of conducting themselves in an improper manner while employed as the face of a major sports program, thus representing the entire university. Just how many more coaches could eventually suffer a similar fate is unknown. But the odds are likely solid that Rodriguez will not be the last coach to be forced out as a result of questionable sexual behaviors that the school must address.

It is becoming more clear the impact of the “Me Too” movement that has been sweeping the nation over the few months will continue to have an impact on the college sports world and sports in general. In the past couple of years, we have seen Baylor’s football program ripped apart. The serious misconduct of players and coaches acting to protect athletes from the ramifications for those actions resulted in a sweeping sexual abuse scandal in Waco. Art Briles was taken out as the head coach of the program for failing to do the right thing when it comes to protecting women on Baylor’s campus.

Louisville men’s basketball coach Rick Pitino was also removed from his position in the fallout of the FBI investigation that found coaches and university administrators were privy to recruits being paid (shocking, I know). But Pitino also managed to escape without being fired when Louisville was found to be arranging for recruits to be paired up with prostitutes. And we are just a few more years removed from the infamous motorcycle accident of Bobby Petrino that led to his firing at Arkansas after it was learned he lied about the accident to hide an affair he was having with an Arkansas staff member.

For years, coaches of major college football and basketball programs may have been getting away with this kind of stuff behind the scenes, but that can no longer be the case. Not in 2018, a year that figures to see the “Me Too” movement continue to grow as more and more women tell their stories and are taken more seriously than ever.

Last year, TIME magazine recognized the “Me Too” movement by naming the “silence breakers” the person of the year after a year that saw women speak up about past sexual oppression and harassment. That took down anyone and everyone from Harvey Weinstein to Matt Lauer to Charlie Rose and so many more. The same movement will continue to have an impact on the sports scene, as seen recently with the conviction of former Team USA gymnastics doctor Larry Nassar after a guilty plea confessing to sexual abuse crimes inflicted on young amateur gymnastics like Aly Raisman, McKayla Maroney, Gabby Douglas and many others.

The more stories that come out about sexual abuse, the more the sports world will be cleansed and brought into the modern era where women and men are supposed to be treated equally and not as objects. We clearly have plenty of work to do to ensure equality in the sports world. No matter how far it seems we have come, stories of improper behavior from a major college football coach will be just one reminder of how far there still is to travel. So too is a simple comment from a football player when a woman enters the workroom, apparently.

To the Alabama football player who was shocked that female sportswriters were coming into the locker room after the game: It’s 2018, I can handle myself and you can take your chauvinism elsewhere.

Though a far less egregious action, a comment about a woman in the same work environment as her male colleagues in the industry shows a lack of awareness that must still be addressed. And this is far from the first reminder that the football world still has some room for improvement in this area. Earlier in the NFL season, Carolina Panthers quarterback Cam Newton was criticized for his amusement over a female reporter asking about routes.

But silly comments are merely disrespectful. The emotional harm from those can be shrugged aside and dismissed as foolish. They are nothing but a simple reminder of the mentality some in the sports world still carry with them when it comes to women, and that mentality sometimes devolves into something much worse and disturbing, as we have seen at Baylor. The entire sports world needs to do better here.

Whether or not the allegations made against Rodriguez are legitimate or not may eventually have to be settled in a courtroom. Regardless, it raises the issue once again about the pattern of sexual misconduct in the sports world. If the “Me Too” movement continues to have the impact that is intended, hopefully, one day issues like this will be eradicated for good, for everybody.