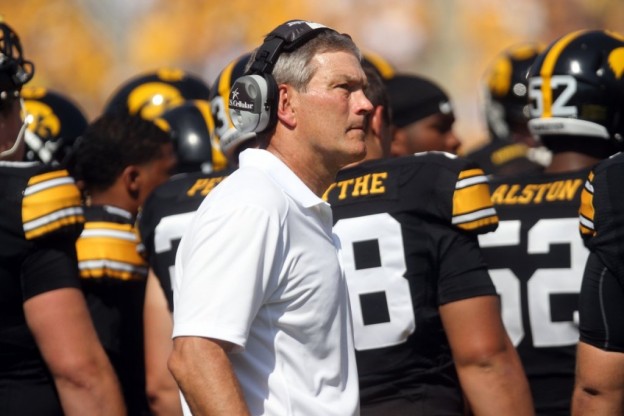 Here’s the deal; sometimes you just want a beer. No carbonated margarita or anything with lemon or lime in it. Sometimes it’s just “Dude, give me a cold Stroh’s and leave me alone on the couch to watch this game.”

This is your Rose Bowl. In Iowa and Stanford, you get the “big uglies,” you get the “between the tackles” stuff that people will tell you is dying in football, even though it’s not. You get two teams that have an adoration for running the ball down the throat rather than throwing over the throat. This game features two teams that have overachieved: one ranked on the back end of the top 25 to start a season (Stanford) and one nowhere near it (Iowa). How will it shake out? There will be blood.

When Iowa has the ball

Truth be told, this isn’t a fancy restaurant where the Hawkeyes have to begrudgingly put on a sport coat and stupid looking shoes to go eat when all they want to wear are some jeans and a t-shirt. Iowa can be themselves, and more likely than not, will have to be themselves to defeat Stanford. The Hawks have mostly looked at Stanford as a Big Ten (far) West team, because Stanford’s M.O. is to line up behind about five NFL prospects and run the football down the throat.

Seeing as the Hawks grind out an average of 192 on the ground in a conference that boasts six programs this past season in the top 18 nationally in run defense (five, if you exclude Iowa), they seem as equipped to, and normalized as anyone, with shoving the ball betwixt the tackles and watching you gasp for air. There’s no reason for them to get cute, here. Their strength is Stanford’s vice.

When Stanford has the ball

Much like in a belching contest with your buddies when you were kids, Stanford will try to do what Iowa does and do it better. On the season, they tromped for over 225 per game on the ground, second best in the Pac-12 and 18th in the nation.

They’ll need to do more than that, however, because aside from Northwestern, whom they were wholly unproductive against with 85 yards, they haven’t seen a run defense like Iowa’s. The top Pac-12 run defense, Arizona State, was not on the schedule. The Hawks are 11th in the country.

The one thing to take away from the Oregon loss and the Notre Dame near-loss was that Kevin Hogan threw the ball pretty well in both. He’ll need to. Iowa is 10th in the nation in pass efficiency defense. The key will be keeping Iowa off balance and guessing a little bit. The Stanford front seven is not as bulky or intimidating as Michigan State’s (Iowa’s only loss), so they’ll need to put up some points to get this thing done. Confusing Iowa about the usage of all-world running back Christian McCaffery will be key in keeping the Iowa defense from just raising straight Hell all evening.

Lastly, even when it means giving up a play here or there, Stanford must take care of the ball. The Hawks are 8th in the country in turnover margin.

If it comes down to the kicking game, both are solid. Iowa’s below average in net punt yards, just over 36 per punt, good (or bad) for 83rd in the country. Keep an eye on that if Iowa gets started in bad field position too often.

Stanford has an even turnover margin on the season, ranking 65th in the country.

Stanford’s acceptance rate for applicants is only 5.1 percent.

Iowa and Stanford are back to back in terms of third down conversion defense, 52nd and 53rd in the nation.