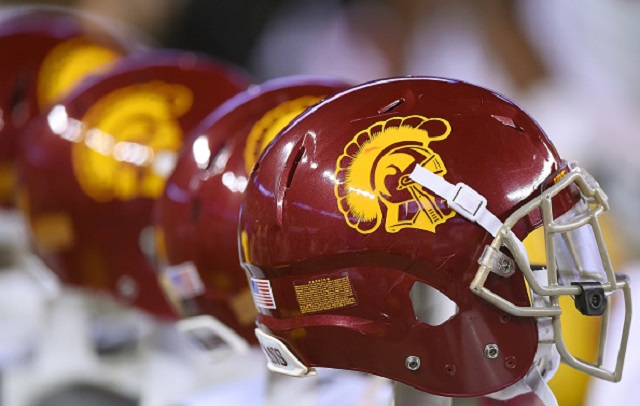 Although Trojans fans don’t have much experience with feeling self-pity over their program’s storied history, USC’s last seven seasons produced plenty of that.

From 2002 to 2008, the school appeared in either the Rose or Orange Bowl every year, collecting two national championships in the process. Then the college football powerhouse suddenly crumbled to its version of mediocrity. First, after a 9-4 campaign — including a win over Boston College in the Emerald Bowl — then-head coach Pete Carroll bolted for the NFL, trading his nameplate in for the Seattle Seahawks.

Five months later, the team was punished by the NCAA. Due to irregular benefits for ex-USC athletes Reggie Bush and O.J. Mayo, the NCAA handed the Trojans’ football program a two-year bowl ban, vacated 14 wins, and took away 30 scholarships over a three-year stretch.

Despite these penalties and the fact that the team has had four different coaches, USC has posted a 52-27 record, including a 2-2 mark in bowl games. Respectable, right?

Not when that school resides in Southern California.

When the athletic department decided on finally removing the interim tag off Clay Helton in November, signing him to a five-year contract, the expectation orbited around reeling the team’s prestige back in the form of more wins. Now just a little more than a month away from their season kicking off, the pieces are on the table for Helton to succeed. He must figure out how to complete the puzzle, though.

Offensively, quarterback Max Browne should figure to hold off redshirt freshman Sam Darnold and enter his first campaign at the helm. He’ll receive oodles of assistance from his coworkers, though. In the backfield, Ronald Jones II and Justin Davis set the tone, fusing together for 1,889 yards and 15 touchdowns a year ago. Plus, receiver JuJu Smith-Schuster represents an elite No. 1 target, hauling in 89 receptions for 1,454 yards and 10 scores in 2015.

On the other side of the ball, defensive coordinator Clancy Pendergast coaches a brand-new defensive line, losing its previous starting bunch to graduation. On top of that, defensive tackle Kenny Breslow tore his ACL in spring practice, forcing Pendergast to sew up a consistent pass rush with the likes of up-and-coming linemen Noah Jefferson, Rasheem Greene, and incoming five-star commit Oluwole Betiku.

66.8 — Cody Kessler’s completion percentage in 2015 (No. 12 in Division I). Browne replaces one of the most accurate quarterbacks in the country, as Kessler departed for the NFL. In his limited time under center, Browne is 11-of-19 for 143 yards. Hence, toss those stats off the deck.

Instead, let’s jump back to Browne’s teenage years, when he earned the National High School Player of the Year award, completing 73.5 percent of his throws, tossing 49 touchdowns and only five interceptions as a senior. Albeit against inferior competition, he exhibited his ability to accurately sling the pigskin. Considering the talent of Smith-Schuster, part-time cornerback and receiver Adoree’ Jackson, and two incoming four-star wideouts, Browne could deliver solid stats if he displays similar precision to his glory days.

3,521 — The amount of passing yards USC allowed a campaign ago (No. 119 among FBS schools). While the Trojans’ passing attack consistently frightened opposing defenses, their secondary usually dealt with similar stomach aches. Pendergast’s squad yielded 25 touchdowns through the air, ranking No. 101 in the nation. While Jackson and Iman Marshall combined to break up 17 passes in 2015, USC needs some younger corners to step up to help buck this trend this fall.

At safety, the development of Marvell Tell and Jonathan Lockett will give the the Trojans extra depth at the position, and the team should benefit from a security blanket behind returning starters Chris Hawkins and Jonathan Plattenburg, too.

Why it matters: Even though a loss wouldn’t be detrimental, USC needs to show its capable of at least hanging with one of the nation’s best teams. Whoever starts at quarterback for the Crimson Tide, the Trojans can expect former head coach and current Alabama offensive coordinator Lane Kiffin to lean on running back Bo Scarbrough. Scarbrough sat in the wings behind Derrick Henry and Kenyan Drake a season ago. The five-star tailback in the 2015 recruiting class could cause fits for an unseasoned starting front seven.

Why it matters: After busting loose for 322 yards in those two contests, running back Christian McCaffrey probably haunted USC’s defensive lineup in their dreams during the offseason. Once again, the Trojans’ front seven will be tested, hoping to slow down the Heisman Trophy candidate. In order to begin to defend their place atop the South Division from a year ago, Helton’s crew must redeem itself.

Why it matters: Prior to their regular season finale with the Fighting Irish, the Trojans hope to frustrate quarterback Josh Rosen just as much as they did a year ago. In their most recent contest, Rosen looked flustered, completing 19-of-37 passes for merely 237 yards, along with two interceptions. Heading into 2016, though, the sophomore tacked on 15 pounds of muscle and undertakes a pro-style attack, giving USC reason to believe it’ll face a stronger offense. Consequently, this matchup could determine the winner of the division.

Max Browne, QB — Without a doubt, Browne’s performance will be placed under the microscope more so than any other Trojan. Even with the already praised Kessler, USC’s offense ranked behind six other Pac-12 members (Oregon, Cal, Arizona, Arizona State, Washington State and UCLA), finishing No. 38 overall in Division I.

JuJu Smith-Schuster, WR — The then-sophomore electrified college football a season ago, ranking fourth nationally in receiving yards. Additionally, Smith-Schuster revealed his explosiveness and toughness, gathering 16.3 yards per catch with a cast on his hand for part of the 2015 campaign. Given another offseason to develop, the 6-foot-2, 215-pounder should see his numbers improve this fall.

Adoree’ Jackson, CB/WR — In 2015, Jackson was named first team All-Pac-12 at cornerback and also proved his worth on offense and special teams. The utility man reeled in 27 catches for 414 yards (29.6 yards per catch) and two scores, while picking up two touchdowns on punt returns. Clearly, the 5-foot-11, 185-pounder can do it all and will be a major contributor in 2016.

Cameron Smith, LB — If Smith had avoided a knee injury on Nov. 13, he would’ve easily led the club in tackles. Instead, the the Pac-12 defensive freshman of the year notched just 78 of them, tacking on six pass deflections, three pass breakups, and three interceptions in 10 games. Assuming he’s fully recovered, the 6-foot-2, 245-pound beast will aid a questionable pass rush.

5. USC finishes top-4 in the conference in rushing yards per game.

In 2015, the Trojans finished eighth in the Pac-12 in rushing yards per game (168.2). While the hype surrounding Browne is legitimate, expect the Trojans to utilize their accomplished tailback tandem of Jones II and Davis, who combined for 1,889 yards.

With Jones II entering his second year in a maroon and gold uniform, offensive coordinator Tee Martin should feed the talented rusher (6.5 YPC) an increased workload, as Davis sees his normal amount of touches (153 last season). Furthermore, USC returns all of its starting offensive lineman from last campaign, giving reason to believe the running backs will enjoy a boatload of defense-free turf to rumble upon.

The linebacker could reach around 110-plus total tackles in ’16. That’s how high his ceiling is. Smith eclipsed at least 10 tackles in three games last season and will be expected to stockpile similar numbers more consistently. Be prepared for the sophomore to garner attention from around the country as the season rolls on.

3. The Trojans beat the Cardinal.

Guided by a riveting showcase via Browne, USC defeats Stanford in a shootout, proving that it’s more than capable of competing for Pac-12 titles in back-to-back seasons. Moreover, the program is desperate for a signature win, and this victory will provide exactly that.

After compiling a 65.9 percent catch rate as a sophomore, the now-junior could supply historic numbers in ’16. Smith-Schuster will top the nation in receptions and receiving yards, along with hopping over Marqise Lee’s program-high receiving yards in a single season (1,721 yards, 2012).

The Trojans won’t reach the Rose Bowl, but under Helton’s leadership, this win total confirms the team’s continued march towards returning to its dominant form during the Carroll era.