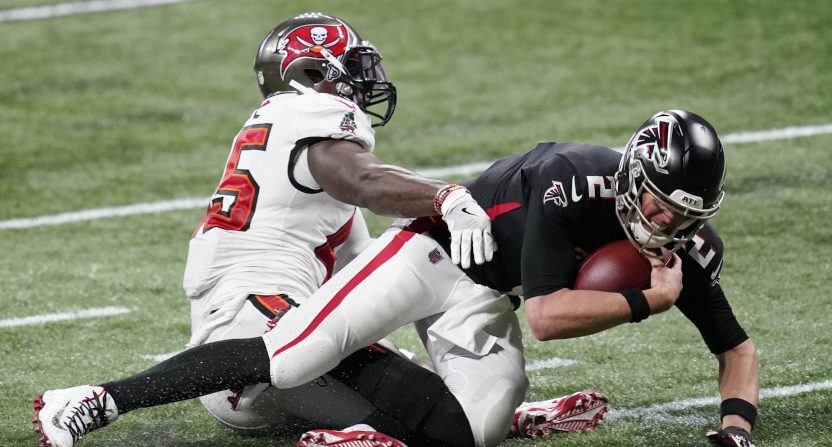 The last several years have seen a lot of talk about the Atlanta Falcons and blown leads, which gained particular prominence after their blown 28-3 lead to the New England Patriots in Super Bowl LI in February 2017. This year has been particularly bad for them on that front, including a 20-0 first quarter lead lost (with the help of a wild onside kick), a 26-10 end of the third quarter lead lost, and a lead blown by accidentally scoring too soon. And on Sunday, they added another mark to the ledger, putting up a 17-0 halftime lead on the Tampa Bay Buccaneers, but then falling 31-27 thanks to a comeback led by Bucs’ QB Tom Brady (who completed 31 of 45 passes for 390 yards and two touchdowns Sunday, and also played a big role in that Super Bowl LI comeback). And these win probability graphs really show that:

The Falcons have now lost four games this season where they had a 95% win probability or higher. pic.twitter.com/0jFJmismGg

At least the Falcons are able to take some leads? They’ve looked like a decent team at some points this year, including on Sunday, when QB Matt Ryan (shown above getting sacked by Devin White) completed 34 of 49 passes for 356 yards and three touchdowns with no interceptions. But they’re certainly not able to close games out. On Sunday, the ground game was part of the issue (running back Ito Smith only carried the ball six times for 24 yards), but the passing game also struggled in the second half. And that fits in with why despite a bunch of impressive individual stats, the Falcons are just 4-10 on the season.

These losses have come under different leadership (head coach Dan Quinn and general manager Thomas Dimitroff were both fired after the loss to the Cowboys in early October and the loss to the Bears in September; the late-October loss to the Lions and this week’s loss to the Bucs have come under interim head coach Raheem Morris, with team president and CEO Rich MacKay overseeing day-to-day football operations for the time being), but they have kept coming. We’ll see if the Falcons can find some ways to build leads and not blow them in the weeks and years ahead.