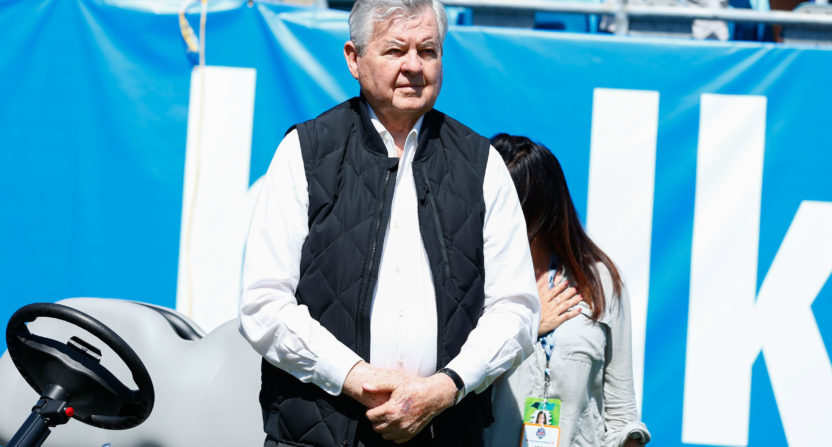 This December, the Carolina Panthers opened an internal investigation into owner Jerry Richardson’s workplace behavior just before Sports Illustrated released a lengthy report into Richardson’s behavior, alleging sexual harassment, workplace misconduct, racial slurs and more. That story included the detail that at least four former team employees “received significant settlements from Richardson or from the team in exchange for what amounted to a vow of silence.” Around the SI story’s release, the NFL announced that they were taking over the investigation, and later that day, Richardson announced he was selling the team.

But the details of what happened are still notable, as are questions about just how serious the league’s investigation actually is. The latter in particular may provide some insight as to if the NFL can be trusted to investigate accusations against its owners, players and staffers. And one former Panthers’ employee who says she was repeatedly harassed by Richardson penned a long first-person piece that SI published Thursday, one which casts major doubts on the league’s investigation here and their investigations in general. In particular, that employee says she was told the league would not protect her from violating her non-disclosure agreement if she spoke to an investigator. First, from the SI preamble:

Encapsulating just how dramatically the power of owners trumps the power of the league itself, Richardson has declined to release parties from the terms and conditions of their NDAs. In multiple instances, SI has learned, complainants are willing—eager, even—to share their experiences with [independent investigation chair Mary Jo] White. But they are unwilling to do so if it means jeopardizing their financial payouts. And White lacks the authority to give them the immunity they seek or to compel Richardson to cooperate. (White declined to comment.)

And from the employee’s story:

My attorney spoke with Mary Jo White to let her know that I was willing to cooperate with the investigation that you had given to her. Ms. White said she would like to hear my truth, but neither she nor you could protect me from the penalties of breaching my NDA.

Let me get this straight. You say you are doing a thorough investigation of “workplace misconduct” of Jerry Richardson. Through my attorney, I let you know that I am indeed a victim of such “misconduct” and have information for you—but you cannot protect me. Got it. You have zero power, and that makes your investigation a farce.

This was confirmed when Jerry Richardson’s personal attorneys told my attorney that Jerry Richardson had NO intention of turning over any information or signed NDAs to you, and that I had better not give you any information either, or I would be in strict violation of the NDA. Seems everyone keeps perpetuating fear. It’s a theme in my truth.

You need to know that not talking about or hearing my truth does not make it go away.

Throughout the many years I was sexually harassed by Jerry Richardson, I always believed that there was no one above him, no one whom I could tell, without repercussions, what was happening to me. You proved me right. You have now become another enabler.

The employee’s story overall is a notable and disturbing read, and while many of the accusations in it were previously aired in SI’s original report (Richardson calling a black scout the n-word, touching female employees’ breasts while putting on their seatbelt in his car, rubbing their legs in his office and more), the expanded detail here is significant and looks bad for Richardson. And what’s perhaps particularly damning is the inclusion of suggestive handwritten notes the employee says she received from Richardson. (SI offered the Panthers the chance to dispute the notes’ authorship before publication, they declined, but did release a statement about how they’re committed to improving workplace conditions.) Here those are: 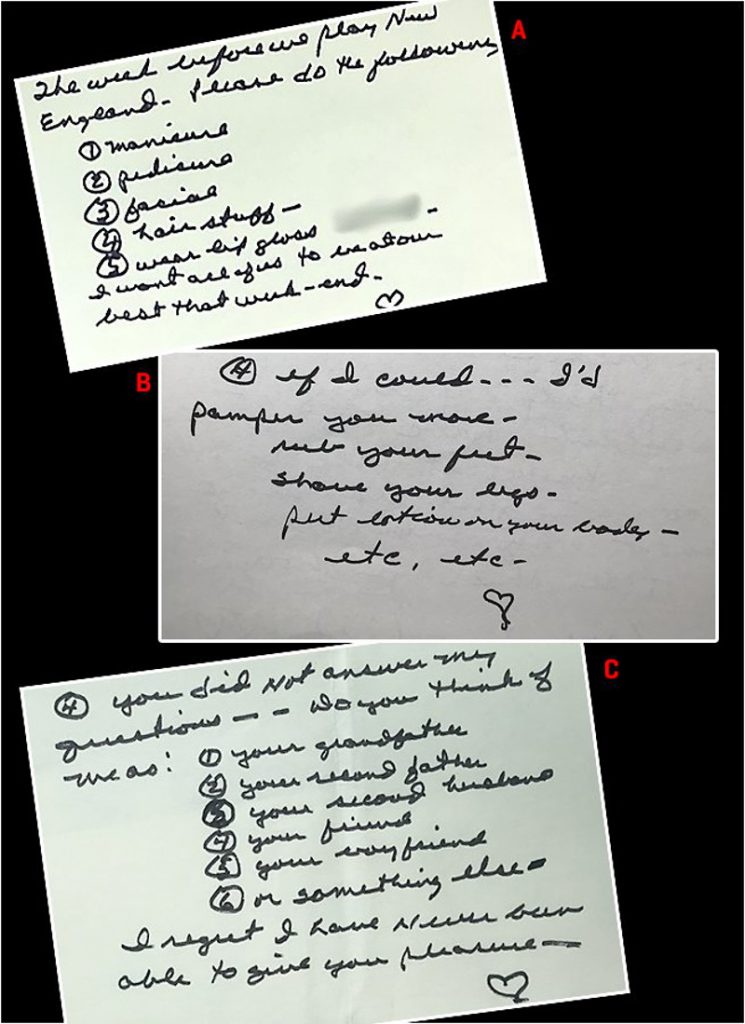 The first note, asking the employee to make specific personal appearance changes the week before the Panthers play the Patriots, is problematic enough, but the next two are worse. Saying he’d “Rub your feet. Shave your legs. Put lotion on your body  – etc, etc” is certainly unwelcome and suggestive, as is the third note asking for a response about how she sees him and concluding “I regret I have never been able to give you pleasure.”

The notes are significant as potential further corroboration of these stories about Richardson. They’re far from the worst thing he’s alleged to have done, but they provide a particular rebuttal to other owners like Houston’s Bob McNair who claimed Richardson’s comments “could have been made jokingly.” The employee has a section criticizing McNair and another one criticizing the NFL in her story, and that criticism seems apt considering their overall response here. (She also criticizes Panthers’ coach Ron Rivera for his Richardson-supporting huddle chant.)

The larger takeaway from this story may be about the ways the NFL isn’t empowering its investigators, especially when it comes to NDAs. The league can’t necessarily outright release employees from NDAs they signed with an owner, but they assuredly could say “If you speaking to our investigator leads to a court action where you lose your settlement, we’ll cover it.” This is a business that brought in an estimated $14 billion in revenue in 2017, a major jump from $8 billion in 2010. And they’re hiring high-powered attorneys to make it look like their investigations are serious; White is a former U.S. attorney and chair of the SEC. But it’s worth wondering just what that investigation has been doing over four months, especially if the NFL won’t give it the resources to get employees who signed NDAs to talk.

In this case, it’s led to one employee coming forward to anonymously share her story through the media, because she believes she’ll have more protection there than in talking to the league-appointed independent investigator. And she may be right; Richardson could still try to enforce the NDA over this report, but with him signing NDAs with multiple former employees, he’d have to prove who the one in question was, and that could lead to a tough and ugly fight. It’s positive that this employee was able to speak up and share her story and relay further details of just how problematic Richardson’s behavior was, and her doing so publicly through SI may actually be even more effective overall than if she’d just spoken to a league-appointed investigator; we don’t know how much will actually come out in the league’s report, and sharing the disturbing details about Richardson to the wider world has merit. But it’s highly disappointing that the NFL can’t find a way to talk to the people it needs to in this investigation, and that raises a whole lot of questions about the NFL’s investigations in general.