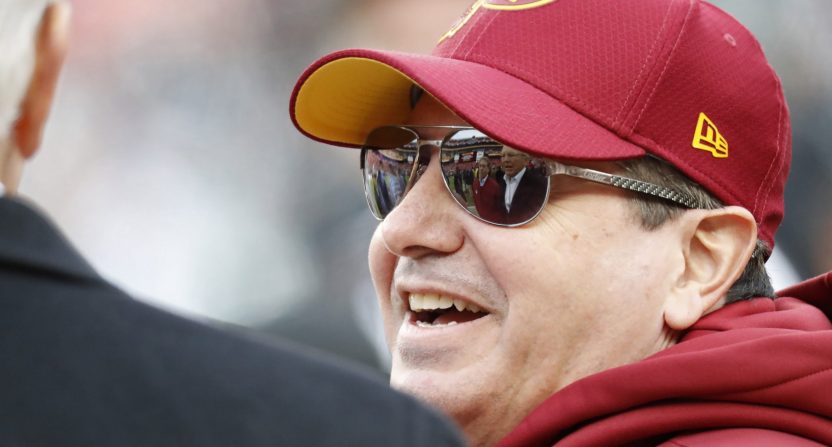 One of the biggest questions around the Jon Guden scandal and the emails he wrote that included racist, homophobic, and misogynistic language, is who leaked the emails to the New York Times and media outlets.

The NFL has denied giving the emails to the media, which may or may not make sense. The most logical conclusion might be that someone who has a vested interest in drawing attention away from themselves and placing it on others would be the culprit.

One group of people who were most affected by the emails was former Washington Football Team cheerleaders, whose scandal was relitigated through the emails. Former cheerleaders have been asking for answers from the NFL and received none.

Now, one former WFT cheerleader is making it known that she believes that WFT owner Dan Snyder is the one who leaked the emails. Melanie Coburn, a former Washington Football Team cheerleader and marketing director told Fox News that Snyder leaked the emails in order to throw all of the blame for the situation onto Bruce Allen, who always seems to be involved in each leak’s main storyline.

“I believe Dan Snyder leaked these emails,” Coburn said. “I believe he’s trying to put all the blame on Bruce Allen. He sent over a dozen private investigators to my colleagues’ homes across the country … to show up on cheerleaders’ doorstops and ask them what their relationship with Bruce Allen was.

“I feel like he’s trying to pin everything on Bruce, right, and place all the blame for all of the bad culture on him, which just isn’t true.”

An attorney for Snyder responded to Fox News by denying the claims categorically.

“Any suggestion by Ms. Coburn that anyone associated with the Washington Football Team was behind any leaks concerning Jon Gruden is categorically false and part of a pattern of misinformation being spread by Ms. Coburn,” attorney Jordan Siev, told Fox News.

The NFL has said it has no plans to release the remaining emails included in the 650,000 that was part of the investigation. So perhaps we’ll never know who leaked the emails or see anything else to help clarify the big picture. However, it’s interesting that all three leak reports, regarding Gruden, Adam Schefter, and the NFL’s top legal enforcer, have revolved around Allen and have not included anything involving Snyder.