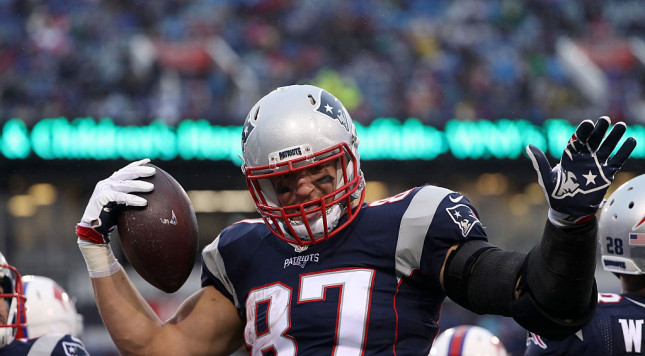 When you think of New England Patriots tight end Rob Gronkowski, you think of a fun-loving goofball who always seems to be having a good time. That wasn’t the case this past offseason, however, as Gronk spent much of it away from the team pondering his future. They two sides came to terms on a one-year deal last week but, according to Ian Rapoport, the two sides were so far apart this summer that the Patriots almost traded Gronk before he threatened to just walk away altogether.

Forseee your own future, control your own temptations, and your destiny will be not just be reached, it will just be starting.

We’ve known for some time that Gronk has been feeling disenchanted with The Patriot Way for some time now. He told reporters that he’d “look at my future” after the Patriots’ loss in the Super Bowl to the Philadelphia Eagles. But after that,  NBC Sports Boston’s Tom E. Curran reported that the atmosphere in Foxborough was “starting to wear on [Gronk] mentally and physically, the atmosphere in Foxboro…He seriously considered stepping away from the game in training camp.”

While Gronk did Gronk things on his own, the Patriots starting thinking about what to do with their valuable tight end asset. That apparently included several interested teams, one of which was reportedly close to working out a trade with New England. However, per Rapoport, when Gronk heard about the potential deal, he balked and told the Patriots he’d rather retire than play elsewhere. He was only interested in playing for the Pats and catching touchdown passes from Tom Brady. Since Gronk would need to sign a new contract in order to make any trade work, that was off the table.

Eventually, Bill Belichick,  Gronkowski, and Gronkowski’s agent Drew Rosenhaus had a sitdown, which ended with the two sides agreeing on a one-year deal that earns Gronk more money overall.

And so, Gronk will enter his ninth season with the New England Patriots this weekend. It’s possible that he could be there for a tenth or even eleventh, but it also sounds like Gronk is going to take things year-by-year, which feels like a very Gronk way of going back life anyway.

Besides, he’s always got a WWE career to fall back on if he ever does walk away from the NFL.