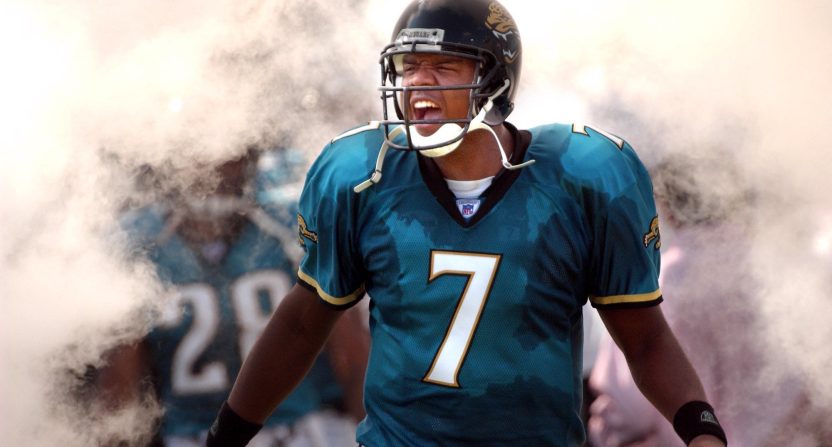 The Jacksonville Jaguars have yet to hire their next head coach. At this point, though, we can safely say that it will not be former Jacksonville quarterback and current Tampa Bay Buccaneers offensive coordinator, Byron Leftwich.

Rick Stroud of the Tampa Bay Times reported on Thursday that Leftwich is expected to remove himself from consideration for the opening.

Amazing at Senior Bowl the chatter is Byron Leftwich made a mistake that he made it known that he couldn't work with Trent Baalke when the question was presented to him. He suggested the Jaguars should hire his guy Adrian Wilson as GM.

Both of those reports had plenty of people scratching their heads. A general feeling from Reid’s report was that Leftwich’s stance was not a mistake or anything close to it.

GMs and Head coaches have to be on the same page.

It’s not a “mistake” for Byron Leftwich to want a top tier GM for him to take the job. He knows he only gets 1 shot at head coach and setting yourself up for failure is a bad idea. https://t.co/iUuVm76H29

Ask 49er fans about Trent Baalke. Byron Leftwich was not being unreasonable. https://t.co/QbXTWFLFPE

Don’t ever take a job where you don’t feel confident in the management and the people you work with. Not just in sports and the NFL but anywhere. https://t.co/Tt0AXctZPe

Looking at Baalke's track record and the short timeframes Black head coaches get to build a winning culture, how can anyone blame Leftwich for this? Why would any head coach want to handcuff their career and potential for success to Trent Baalke? https://t.co/Hi3hBCi2Fr

Indeed, Baalke’s track record shows the danger in a coach and general manager not being a package deal.

With that in mind, the general feeling around Stroud’s report was that Leftwich dodged a messy bullet.

“You guys can keep that mess”- Leftwich, probably https://t.co/EWgpPOCGoJ

Somewhere, Urban Meyer is smiling… and probably dancing at a nightclub. https://t.co/PxqMR29BAJ

The fact that people would rather NOT work with Trent Baalke than be able to coach Trevor Lawrence should by far be the biggest red flag for the owner 🚩🚩 https://t.co/qyWTckSjDN

I don’t blame him. Shad Khan is sabotaging this franchise. He is the Rachel Phelps of the NFL. https://t.co/SbrPcfazMg

I don’t blame Leftwich one bit. The #Jaguars continue to be a mess at all levels. Their list of interested (and viable) candidates for HC is going to be slim just like the #Texans until they rid themselves of their god-awful front office. https://t.co/uJr2owGpXS

It sounds like the Jaguars have gotten themselves into an awful mess. Or, in other words, just another day at the office in Jacksonville.