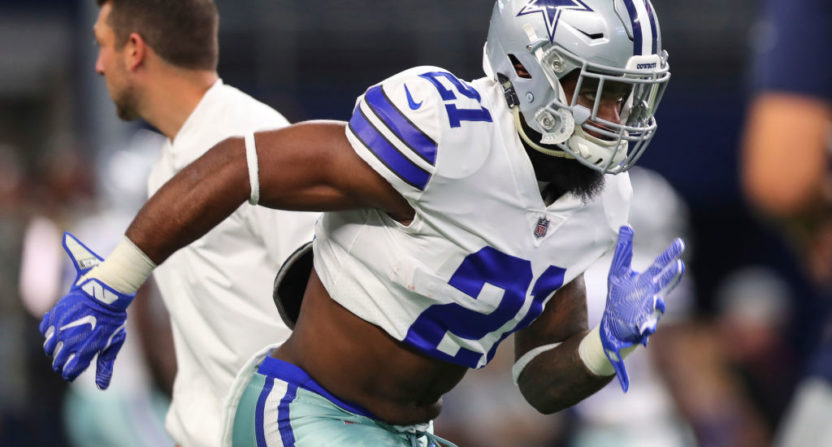 Elliott is currently suspended for six games over accusations of domestic violence against a former girlfriend, amongst other incidents. When rumors starting popping up around the accuser, the NFL strangely accused the NFLPA of creating them (which they denied, while one reporter said he got the information from the NFL’s own report).

Since then it was announced that Elliott would appeal the suspension to Harold Henderson, an arbiter appointed by NFL commissioner Roger Goodell. It’s presumed that the suspension will be lessened, although you never know when it comes to the NFL and their arbitrary ways of handling these situations.

In the meantime, Dallas Cowboys owner Jerry Jones has come out in defense of his running back, telling 105.3 The Fan in Dallas that there’s a lot of confusion when it comes to what really happened and public perception.

“Unfortunately you get confused in this conversation. Every person that has any sense at all understands domestic violence and abhors it. On the other hand, I’ve had a lot of experience in this area. For 10 years before I bought the Cowboys I was the head of [a] battered women [organization] of Arkansas. I raised more money and been in more safe houses than a lot of people that talk about it and so it’s a terrible problem.”

“On the other hand with what we are today and what we’re trying to be relative to addressing it in the league, [it] has all kinds of issues and it should. It’s a very complicated issue because you have no evidence here. That’s all I want to say about it. But it creates quite a convoluted approach by Zeke’s representatives and by the league that I really hate is a focus of all of our attention. I do. Even though others would say that the issue needs this kind of focus and you’re using the NFL for visibility.”

Jones probably would serve himself better by not saying anything at all. The comments come off as self-serving, talking about what he’s accomplished, before transitioning into the kind of “people don’t know the facts” schpiel that just got the Hamilton Tiger-Cats in hot water defending Art Briles. At best, Jones might seem supportive of his guy, but at worst it looks like he’s trying to plant a seed of doubt on the accuser. He’s just vague enough that he can probably deny it if pushed, but it’s there.

Elliott is currently in New York for the appeal, where he’s accompanied by NFL Players Association attorneys as well as lawyers for the Cowboys. One report has already emerged stating that people close to Ezekiel don’t think the suspension will be lifted or shortened. Final briefs are due to the court on Friday but there’s no word on when we might find out the ruling.