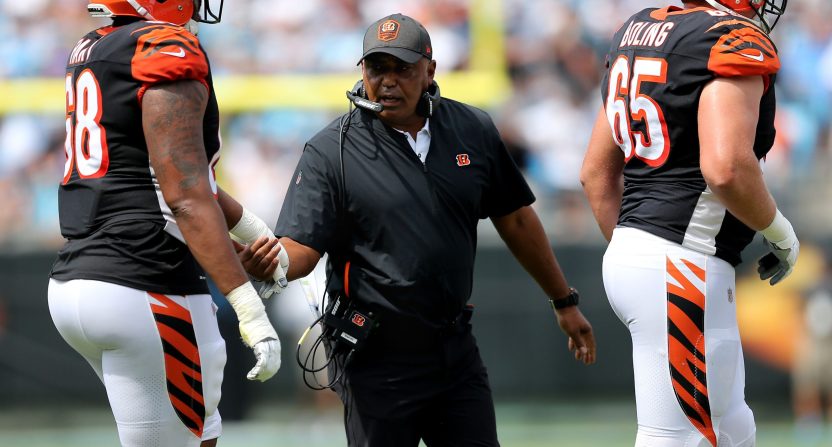 Tuesday, Brian Flores dropped a bombshell lawsuit on the NFL, alleging that the New York Giants invited him to interview for the head coaching job simply to comply with the Rooney Rule but with no intention of hiring him. There were also other scathing allegations in the lawsuit, including an interview with the Denver Broncos in which Flores says team executives “looked completely disheveled, and it was obvious that they had [been] drinking heavily the night before.”

Rumors of sham interviews with black candidates in order to satisfy the Rooney Rule, which requires NFL teams to interview at least one minority candidate for head coaching and senior football operation jobs, have been rampant for years. Especially as we’ve watched the league continue to hire mostly white head coaches in spite of the fact that the league is predominantly black.

Flores’ lawsuit is an invitation for other black head coaches to discuss their experiences around the NFL and they’re starting to. Former Cleveland Browns head coach Hue Jackson shared some allegations of his own on Twitter on Tuesday. Now, former Cincinnati Bengals head coach Marvin Lewis spoke about a sham interview that he alleges took place with the Carolina Panthers before the 2002 season when he was the defensive coordinator with the Baltimore Ravens.

During an appearance on First Take on Wednesday morning, Lewis talked about his experience with the Panthers and how he already knew the team was going to hire John Fox before he even interviewed.

Marvin Lewis says Panthers interviewed him for head coaching job after he knew the Panthers were going to hire John Fox pic.twitter.com/6gUdzNE7Fr

“I did interview with the Carolina Panthers before John Fox got the job,” said Lewis. “And I can recall that we had lost to the Steelers in the second round of the playoffs and I remember sitting at home on Monday and, I think it was Chris Mortenson or someone else, they reported that Foxy would be named the head coach of the Panthers on Friday.

“And when I went to work Tuesday, Brian [Billick] came in, said I just got off the phone with Ozzie [Newsome] and the Panthers want you to come down and interview for the job. I said, coach, I just heard last night on TV that they’re gonna name Foxy the coach on Friday. So he goes back, he talks to Ozzie, he talks to their people, and I end up going down to Charlotte and meeting with the Richardson family and they said that wasn’t true and so forth. And they named John the head coach on Friday.

“So, you know, I don’t know, again, that’s the situation I was in. But you have to go. You have to go and prove that you’re worthy to become the head coach. You’re appreciative of the opportunity but what was supposedly gonna happen ended up happening in that case for sure.”

Lewis would end up taking the assistant head coach & defensive coordinator job with Washington for a season before he was named head coach of the Cincinnati Bengals in 2003, a job he would hold for 16 seasons.

Jerry Richardson, the Panthers owner cited by Lewis, would be ousted from the NFL and forced to sell the team in 2017 after allegations of racial slurs, sexual harassment, and inappropriate conduct.

Few people are surprised to hear Lewis’ story but that doesn’t mean it’s unimportant for him to share it publicly. As Flores noted in interviews, the lawsuit is an opportunity to air all this dirty laundry and enact some kind of change.