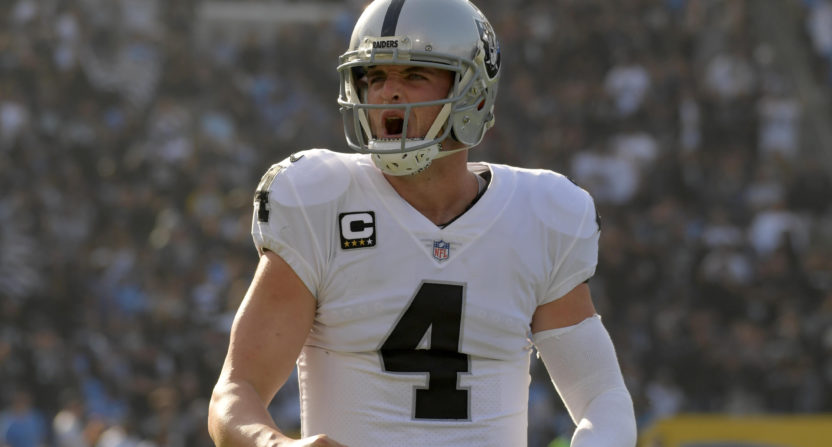 Our offseason summaries began with the AFC East, continued with the AFC North and AFC South, and we close out the conference with the AFC West. This might be the NFL’s most intriguing division through the offseason, with several teams making changes. Are the Chiefs the team to beat or will Jon Gruden put the Raiders back on top?

Draft breakdown: Denver holds the No. 5 overall selection and two picks in the fifth round.

Other potential priorities: The Broncos may have to consider cutting some aging salaries, with Demaryius Thomas, Emmanuel Sanders and Aqib Talib all candidates to be released.

Outlook: Still without an answer at quarterback and a ton of money to spend, the Broncos could be facing a mini-rebuild.

What’s new? Top 2017 draft pick Patrick Mahomes is set to relieve the departed Alex Smith at quarterback. His coordinator will be Eric Bieniemy, who replaces the departed Matt Nagy.

Key needs: The line needs upgrades in the interior, especially if Fulton goes. The defensive front seven needs new talent, especially if Logan leaves with Johnson. And Mahomes could use another weapon in the receiving corps.

Draft breakdown: The Chiefs used their first-round pick to trade up for Mahomes last year and they’re also without a fifth-rounder, but they do have two third-rounders.

Other potential priorities: Kansas City might consider making Justin Houston a cap casualty, and it looks as though Johnson is done. They have to address that aging front seven.

Outlook: Hopes are high for Mahomes, and with Eric Berry returning and Kendall Fuller joining the secondary, they’re likely to be a lot better on defense. Should be a fun year in Kansas City, even if the offseason is kind of boring.

What’s new? Practically nothing, although they are probably excited to see what top 2017 picks Mike Williams and Forrest Lamp can do with fresh, healthy seasons.

Projected salary cap space: $33 million — Just ahead of the middle of the pack.

Draft breakdown: The Chargers pick 17th overall and have one selection in each round the rest of the way.

Other potential priorities: Could be time to look for Philip Rivers’ successor under center.

Outlook: Los Angeles is right there, talent-wise, and should be better in 2018 without doing much in the offseason.

Draft breakdown: The Raiders will pick ninth or 10th (to be determined by a coin toss) and lack a fifth-round pick, but have an extra sixth-rounder.

Other potential priorities: It could be time to move on from the highly-paid, mistake-prone Michael Crabtree, in which case they’ll need to really go in on new receiver options.

Outlook: Oakland could bounce back regardless of what happens this offseason, because it’ll probably come down to what quarterback Derek Carr does under Gruden. Still, the defense needs some work and there are more questions on offense than there were at this point last year.