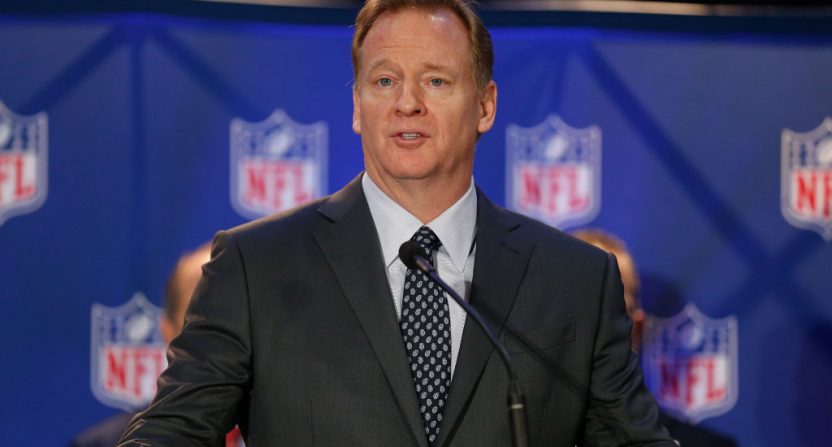 The NFL continues to fend off the evolving world view on marijuana even while more states are making a push to legalize marijuana. That means commissioner Roger Goodell must continue to stick to his standpoint against removing the substance from the league’s list of banned substances. Goodell maintained his standing on this subject in a radio interview with ESPN Radio’s Mike & Mike Friday morning.

“I think you still have to look at a lot of aspects of marijuana use,” Goodell said. “Is it something that can be negative to the health of our players? Listen, you’re ingesting smoke, so that’s not usually a very positive thing that people would say. It does have addictive nature. There are a lot of compounds in marijuana that may not be healthy for the players long-term. All of those things have to be considered. And it’s not as simple as someone just wants to feel better after a game. We really want to help our players in that circumstance but I want to make sure that the negative consequences aren’t something that is something that we’ll be held accountable for some years down the road.”

The pressure to adapt the league policy regarding marijuana continues to be challenged from within, and not just from the players either. Dallas Cowboys owner Jerry Jones recently lobbied to end the league’s marijuana policy entirely, and players have taken the policy to task at various opportunities. The NFLPA has been working on adjusting the policy to soften the penalties for players found in violation of the league rules. The league is, however, taking measures to educate itself on the impact medical marijuana as a pain-management tool has, perhaps suggesting the league may be willing to comply with a modified policy. But as of now, there has been no information given that has convinced the league to change anything.

“We have joint advisers, we also have independent advisers, both the NFLPA and the NFL, and we’ll sit down and talk about that. But we’ve been studying that through our advisers,” Goodell said in his interview on ESPN Radio. “To date, they haven’t said this is a change we think you should make that’s in the best interests of the health and safety of our players. If they do, we’re certainly going to consider that. But to date, they haven’t really said that.”

As long as Goodell has this personal stance on the subject, there will likely be little movement from the league office to bring about any changes to the current policy regarding marijuana. Until more owners join Jones in the effort, Goodell will see little reason to change his narrative unless there is more information provided to sway him the other way. With that being the case, players will have to be mindful of their recreational use of marijuana even in states where the drug is legal.