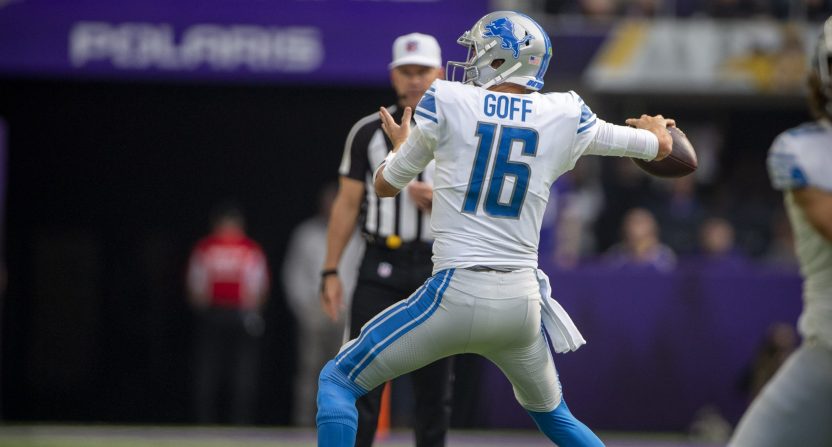 In 2019, Sean McVay coached the Los Angeles Rams to the Super Bowl with the help of quarterback Jared Goff. The future looked bright for both and, it was assumed, they’d have plenty more chances to get back there and eventually win one.

However, in 2021, McVay is still with the Rams while Goff is quarterbacking the lowly Detroit Lions after an epic fall from grace that saw him be replaced by former Lions signal-caller Matthew Stafford as the two were part of a trade that changed both their career arcs.

On Sunday, the Lions visit the Rams for a reunion of sorts. And while both sides have moved on and started fresh, there are still some regrets about the way it all went down. McVay said on Monday that he wished he’d communicated with Goff better about the trade and the impact it would have.

“Yeah. If you said, ‘Do you think that the way that it unfolded was totally different than the way anybody anticipated?’ Yes. Could I have handled it better in terms of, ‘Hey if there’s a possibility of it let’s get ahead, even if you’re out of town, yadda, yadda, yadda.’ So to answer your question, yes. I wish that there was better clear communication,” McVay said Monday.

“You don’t want to catch guys off guard. It came together a lot faster than anybody anticipated. But yeah, of course. Anytime that tough decisions and things like that, where people are affected, you always want to be as understanding and as empathetic as possible and think about it through the other person’s lens.

“I think Jared knows the respect that I have for him. I feel very good about the dialogue that we were able to have before he had gone to Detroit,” McVay added. “He knows the appreciation that we, as an organization, that I have as a coach, for all the good things that he did here.”

Stafford said he’s treating the game against his former team like any other game while Goff declined to comment about it. Ultimately, they’ll say what they need to say through the way they play on the field. For Goff, it might be more about getting Detroit their first win of the season, and if that happens to come against the franchise that decided it didn’t want him anymore, all the better.