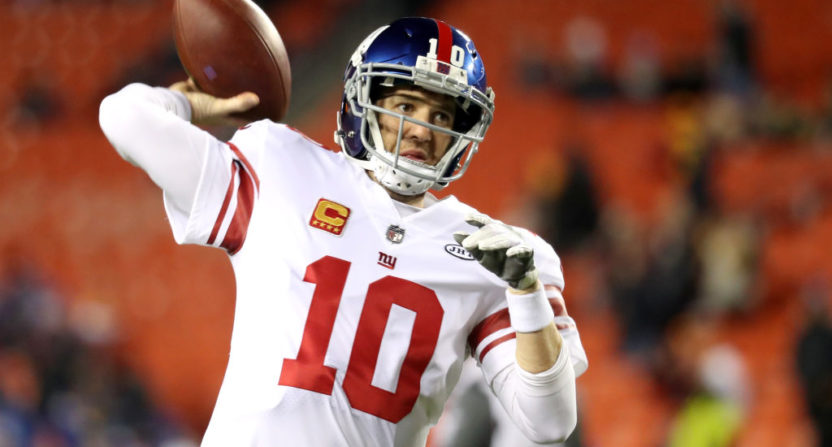 The New York Giants have decided to sit veteran quarterback Eli Manning and everyone is super pissed off. But why? There had been buzz about the potential of this happening for weeks, as the Giants are trudging through the second half of a lost season and have two young quarterbacks on the roster. With that in mind, the move shouldn’t surprise or anger anyone.

It actually makes a lot of sense considering that the Giants are out of contention at 2-9, that Manning could use a break during a stretch of meaningless games at the age of 36, that the team gave Manning the option to continue to start in order to extend his ironman streak, and that they would be foolish not to get a look at 27-year-old former second-round pick Geno Smith and/or 22-year-old rookie third-round pick Davis Webb.

It’s that simple, which is why all of the outrageous reactions are perplexing.

“This is not a statement about anything other than we are 2-9,” general manager Jerry Reese said Tuesday, “and we have to do what is best for the organization moving forward, and that means evaluating every position.”

“I have a lot of confidence in Eli as a player, as a quarterback,” head coach Ben McAdoo added. “But at this point, it’s my responsibility for the organization to make sure we take a look at Geno and at some point take a look at Davis and give them the opportunity to show what they can do.”

Makes perfect friggin’ sense, and yet everyone who ever played with Manning is outraged on his behalf. He isn’t losing a dollar or a big opportunity and if anything, this break could work to extend his career, regardless of where that is. This is a business, people, and the Giants had to make a business decision. They did so in as respectful a manner as they possibly could.

The reality is they have to get a feel for what Smith and Webb might offer them before having to make major decisions about the future of the franchise this offseason, when they’re likely to possess a high pick in a draft that contains several intriguing prospects.

Was it hard to see Manning fighting back tears when discussing it all with the media? Of course. I get it, this is sad. The guy has been the guy for the Giants for over a decade, and you’re allowed to feel for him. But that doesn’t mean there’s gotta be a villain to blame here. Nobody is at fault. This happens in life, and in professional football. Manning accomplished a lot on behalf of that franchise, but nobody gets a lifetime membership as a starting quarterback, anywhere. That’s just not how this works.

And yet this supposed hard-news story from the Associated Press calls the development “an ugly ending,” noting it “was totally unexpected, especially with five games left in the regular season,” which is complete bullshit. Giants brass had been answering questions about this all season long.

In early November, McAdoo conceded that the team might eventually sit Manning for this exact reason, and the move had been widely suggested and debated in the media throughout the month.

Critics of this move are allowing emotion to cloud logic. The Giants, smartly, are not making the same mistake. And the franchise just might better off long-term because of that approach.

1 thought on “Why is everyone up in arms over the New York Giants’ decision to sit Eli Manning?”