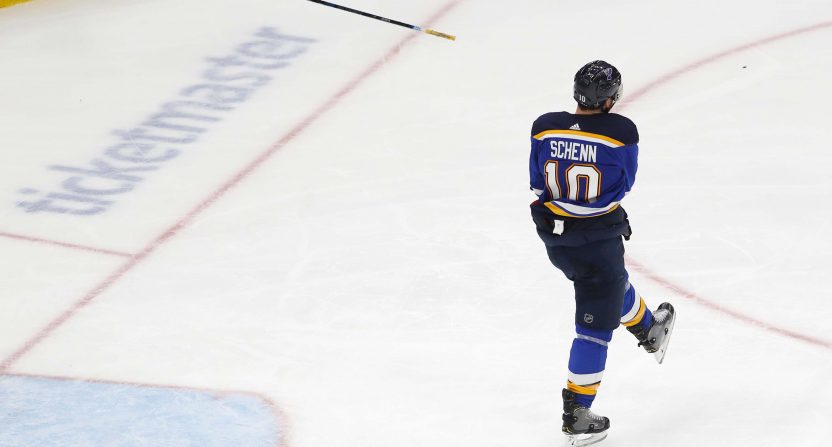 The NHL has already received plenty of criticism over its officiating in this year’s playoffs. Those complaints appeared to hit their climax after a non-reviewable major penalty decision altered the series between the San Jose Sharks and Vegas Golden Knights. Now, the officiating has done it again and the arguments are even louder thanks to a missed hand pass that doesn’t fall under the NHL’s review policy.

Game 3 of the Western Conference Finals between the St. Louis Blues and Sharks was a wild affair, with the Blues falling behind 2-0 early before storming back to hold on to a 4-3 lead deep into the third period. The Sharks pulled their goalie and successfully knotted things up, sending the game to overtime.

There the Sharks found their winner … after a hand pass.

people in my mentions keep telling me the puck never hit meier's glove when it clearly did. pic.twitter.com/PSQQGHX6MV

lol this is such a hand pass pic.twitter.com/4cqWsFEgcg

A player passing the puck with his hand to a teammate in the offensive zone results in a dead play. However, that sort of call must be made on the ice and is – as many hockey fans just learned – not up for review. The officials left the ice and the Sharks claimed another miraculous win that many will say was gifted to them by the officials.

But why isn’t that call subject to review? Why has the NHL been so reluctant to make sure that goals and major turning points in games are called correctly? While the counterpoint has always been that the league is worried about things taking too much time, this year’s playoffs should argue that a bit of extra time is tolerable when the stakes are so high. No one wants to see a great back-and-forth contest ended on such a sour note that throws a dark shadow over a team’s accomplishments.

The irony is the NHL is more than willing to review other actions, like an offside player who didn’t factor into the play.

[player’s toenail is 0.000000005 centimeters offside on a zone entry that occurs four minutes before a goal] we have to have disallow that goal

But here, where the game was altered due to an illegal action, the losing team has no choice but to suck it up and take it.

Sharks fans tried to silence Blues fans by pointing out other missed calls from Game 3, which kind of highlights the entire problem.

The people saying ‘hey there were MORE bad calls than just the ones you are talking about’ are … making … the point.

Why can’t there be another official who is purely tasked with reviews to expedite the process? Why not try something – anything – to try and prevent these situations from happening again and again? It’s time to stop with the “where do we draw the line?” mentality and start trying to correct a broken system.

There’s certainly going to be a lot to debate this summer between the NHL, the owners and the general managers. Officiating and the review system could also become a major talking point in the upcoming collective bargaining agreement negotiations. Players won’t forget these kinds of mistakes.

Until then, the NHL will be content to pretend that the status quo is working as intended. And will edit out any controversial moments from its highlights.

.@ErikKarlsson65's second of the night gives the Sharks a 2-1 series lead. #StanleyCup pic.twitter.com/Ej4QhA3u0C

Hockey deserves better officiating and a better review system. The NHL only has themselves to blame when incidents like this continue to happen. Maybe the mounting pressure from this year’s playoffs will finally force the league to take action a few years too late.

1 thought on “NHL’s officiating hits a new low this postseason, changes must be made”