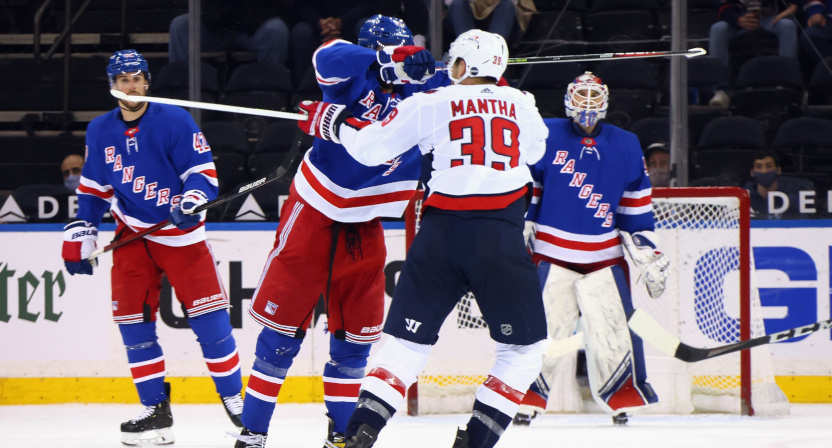 The New York Rangers have been in the news a lot this week. That started with Monday’s game, where Washington Capitals’ forward Tom Wilson punched the Rangers’ Pavel Buchnevich while he was on the ice and then flung Artemi Panarin down by his hair (leading to a deleted tweet from the Caps). It then progressed to Tuesday’s Rangers’ statement calling for the firing of NHL VP George Parros after Parros and the Department of Player Safety didn’t suspend Wilson, and then moved to Wednesday’s firing of Rangers’ GM Jeff Gorton and president John Davidson and Wednesday night’s repeated brawls against the Capitals. The latest Rangers news came Thursday, and it saw the team fined $250,000 by the NHL, and then Buchnevich suspended for a game for a high stick on Anthony Mantha Wednesday (as seen above). First, here’s discussion of that suspension from a Department of Player Safety video, as recapped by J.J. Regan of NBC 4 Washington:

“While we agree that Buchnevich’s actions are defensive in nature, players are not excused from following league rules because of the actions of their opponent,” the video states. “While Mantha’s actions may have been provocative, Buchnevich is not permitted to respond to that provocation with a reckless and forceful strike directly to the face of his opponent.”

The line “players are not excused from following league rules because of the actions of their opponents” feels like it was very carefully worded as it could apply both to this specific hit and to the entire situation in general.

Indeed. But it’s quite interesting to see that NHL department crack down so hard on the Rangers while only giving Wilson a $5,000 fine (with no suspension) for punching Buchnevich and nothing for his actions against Panarin. And the $250,000 fine they levied against the Rangers over that statement was particularly unusual. Here’s more on that from Stephen Whyno of The Associated Press:

The NHL fined the Rangers an extraordinary $250,000 on Thursday for what Commissioner Gary Bettman called demeaning personal comments made publicly about head of player safety George Parros. It’s believed to be the largest publicly announced fine of its kind in NHL history.

Meanwhile, Rangers’ owner James Dolan (CEO of MSG Sports, which owns the team; his family also has a controlling interest in MSG’s various businesses) told Larry Brooks of The New York Post he felt it was worth it for the team to make that statement (notable, considering that he reportedly had more involvement with it than the GM or team president) despite the fine:

The statement made its mark on Tuesday. On Thursday, the NHL made Dolan its mark, fining the Rangers a cool $250,000 for their trouble. Is it necessary to note that was 50 times more than Wilson was fined for Monday’s hysteria? Probably not.

“I feel a little poorer today,” Dolan said lightheartedly “But no, we said what we felt we needed to say and the league did what they felt they needed to do, so it’s fine. Hopefully, we’ll both move on. I don’t think it’s worth enflaming anymore.”

The Rangers’ actions in the wake of Monday night’s events certainly can come in for some criticism, whether that’s about Tuesday’s statement or Wednesday’s brawls. But it is remarkable that Buchnevich is the one who came out of all this with a suspension, and with a more substantial hit to his bank account than Wilson. And it’s worth wondering if this week’s events might have gone more smoothly if the NHL had actually levied some significant punishment against Wilson for his actions Monday.