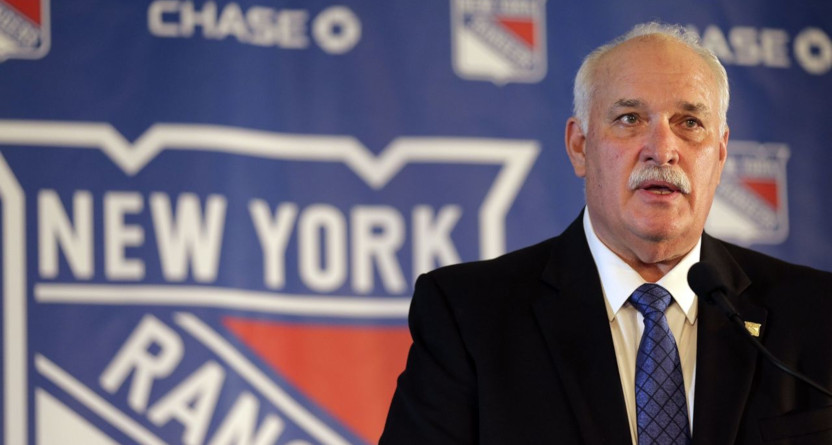 The strange saga around the New York Rangers has taken a new twist. To recap, on Monday night, Washington Capitals’ forward Tom Wilson punched the Rangers’ Pavel Buchnevich while he was on the ice and flung Artemi Panarin down by his hair, leading to a lot of backlash (and to the Capitals even deleting the initial tweet they’d posted in support of Wilson). On Tuesday, the Rangers issued a remarkable statement calling the league’s decision to fine rather than suspend Wilson “dereliction of duty” by NHL senior vice president of player safety George Parros, and calling for Parros’ job. And on Wednesday, the Rangers fired team president John Davidson (seen above) and general manager Jeff Gorton, amidst reports that those two executives had tried to distance themselves from the “team” statement:

BREAKING. Shocker. Rangers have fired John Davidson and Jeff Gorton, Post has learned. Chris Drury will remain with organization and will have prominent role.

Sources say that #NYR president John Davidson and GM Jeff Gorton scurried to distance themselves from the team statement that was issued on Tuesday night, telling other executives that they did not know it was in the works until after it was released.

Sportsnet’s Elliotte Friedman noted that that statement appears to have been “driven” by James Dolan, the CEO and majority owner of Madison Square Garden Sports (which owns the Rangers and the NBA’s New York Knicks), and that Dolan may have been looking to make an executive change even before Davidson and Gorton distanced themselves from that statement:

However, there is word Dolan was unhappy with this NYR season and wanted to make a change. Seems crazy to me, because they have a come a long, long way in two years…but he’s the owner.

As per Friedman, the roles of president and GM will be combined going forward, with Chris Drury (the former player currently serving as the Rangers’ associate GM and sometimes emergency coach, plus the GM of their AHL franchise) taking on both roles:

Chris Drury will be President & GM of NYR

The Rangers are 26-21-6 on the season, fifth in the East Division and one spot outside of the playoffs (although they’re not going to make the postseason; they’re 10 points back of the crosstown Islanders with three games left to play). As Friedman notes, Davidson has produced significant change since his May 2019 hiring; the team went 32-36-14 in 2018-19 and missed the playoffs, but improved to 37-28-5 last year with a qualifying round playoff appearance, and then was making some progress this year as well. (Gorton is harder to evaluate, as he had been the Rangers’ GM since July 2015, and they’ve had ups and downs during that time.) So moving on from him is interesting. And doing so in this particular way, around a “team statement” that wasn’t approved by the team president or general manager, is especially unusual.

It’s also notable to see the discussion around this center on Dolan. Dolan’s involvement with MSG’s teams has received a lot of protests on many levels, to the degree of FS1 even running “Nothing will change until Dolan sells the team” Knicks-bashing ads on NYC subways in 2017 (they were pulled after Dolan personally called 21st Century Fox executive chairman Rupert Murdoch to complain). And he’s often been reported to be involved in the messaging from team social media accounts, to the degree of issuing a memo telling his teams not to follow other NBA and NHL teams in making statements against racism and police brutality after George Floyd’s death (which prompted backlash and meetings from MSG employees).

Dolan has usually been under discussion for what the Knicks have done under his watch, rather than what the Rangers are doing. But with the Knicks actually doing well at the moment, it’s interesting to see him pop up in reporting about the Rangers. And that’s already led to some encouraging of Rangers’ fans and even players to protest, including from former ESPN figure Keith Olbermann:

The Rangers have dismissed President John Davidson and GM Jeff Gorton, who have patiently and brilliantly rebuilt this team to the verge of greatness and dominance.

The players should not take the ice tonight and the fans should boycott.

We must rid NYC of James Dolan #NYR pic.twitter.com/kPdXHa4Osq

Anyway, the Rangers are moving on under different management, and that management seems more likely to approve of yesterday’s statement. As for Davidson in particular, it will be interesting to see if he finds an NHL executive role elsewhere or if he heads back to broadcasting. His former employer ESPN may be looking for some talent soon…