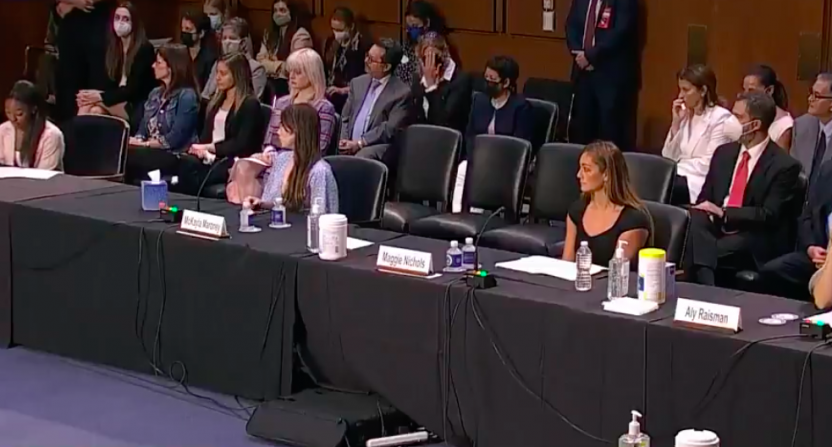 Thank you for your strength in testifying at today’s Senate Hearing, as well as for your tireless efforts to hold those at fault accountable.

Biles, who competed in the Tokyo Olympics just months ago, shared a damning critique of the organizations and agencies that failed Nassar’s many victims over the years and helped perpetuate his cycle of abuse.

“I blame Larry Nassar and I also blame an entire system that enabled and perpetrated his abuse,” Biles said while crying. Along with the FBI, she added that USA Gymnastics and the United States Olympic and Paralympic Committee “knew that I was abused by their official team doctor long before I was ever made aware of their knowledge.”

“I don’t want another young gymnast or Olympic athlete, or any individual to experience the horror that I and hundreds of others have endured before, during, and continuing to this day in the wake of the Larry Nassar abuse,” said Biles.

"To be clear, I blame Larry Nassar and I also blame an entire system that enabled and perpetrated his abuse," Simone Biles gives her opening statement at a Senate hearing on the FBI's handling of the Larry Nassar investigation. pic.twitter.com/yPJX0ejnLg

The four-time Olympic gold medalist talked about the need for a message to be sent to those who failed the hundreds of victims, not just the perpetrator of the crimes.

“We suffered and continue to suffer, because no one at FBI, USAG, or the USOPC did what was necessary to protect us,” she said. “We have been failed and we deserve answers. Nassar is where he belongs, but those who enabled him deserve to be held accountable. If they are not, I am convinced that this will continue to happen to others across Olympic sports.”

“If you allow a predator to harm children, the consequences will be swift and severe. Enough is enough.”

Maroney, now 25 and retired from gymnastics, shared the same details she shared with the FBI in 2015.

"What is the point of reporting abuse if our own FBI agents are going to take it upon themselves to bury that report in a drawer," McKayla Maroney says on the FBI's handling of the Larry Nassar investigation.

"They had legal, legitimate evidence of child abuse and did nothing." pic.twitter.com/0sDHdLMj4E

She also detailed the events from a trip to Tokyo, in which Nassar gave her a sleeping pill during the plane ride.

“That evening, I was naked, completely alone, with him on top of me, molesting me for hours. I told [the FBI] I thought I was going to die that night because there was no way that he would let me go. But he did,” said Maroney. She added that the FBI “minimized” her allegations, silenced her, and falsified her report of the abuse.

Aly Raisman, who is also retired from gymnastics, told lawmakers that the FBI took 14 months to interview her about allegations against Nassar and that the FBI, USAG, and USOPC “quietly allowed Nassar to slip out the side door” and continue committing abuse.

"I felt pressured by the FBI to consent to Nassar's plea deal," Aly Raisman says on the FBI's handling of the Larry Nassar investigation.

"The FBI and others within both USAG and USOPC knew that Nassar molested children and did nothing to restrict his access." pic.twitter.com/Mzq2NElmQ9

In 2017, Nassar pleaded guilty to 10 cases of abuse, though he was accused by over 265 women and girls who claim he molested them. He was forced to hear testimony from many of his accusers before being sentenced. He is currently serving at least 175 years in prison.

An internal Justice Department investigation from July said that the FBI made fundamental errors in their probe and did not treat it with “utmost seriousness” after the allegations were first reported to their Indianapolis office in 2015. The FBI has also acknowledged its own conduct was inexcusable.

FBI Director Christopher Wray, who was not in charge of the agency at the time, also testified.

“That is inexcusable. That never should have happened, and we’re doing everything in our power to make sure it never happens again,” Wray said. “I’d like to make a promise to the women who appeared here today and to all survivors of abuse, I am not interested in simply addressing this wrong and moving on. It’s my commitment to you that I and my entire senior leadership team are going to make damn sure everybody at the FBI remembers what happened here in heartbreaking detail.”